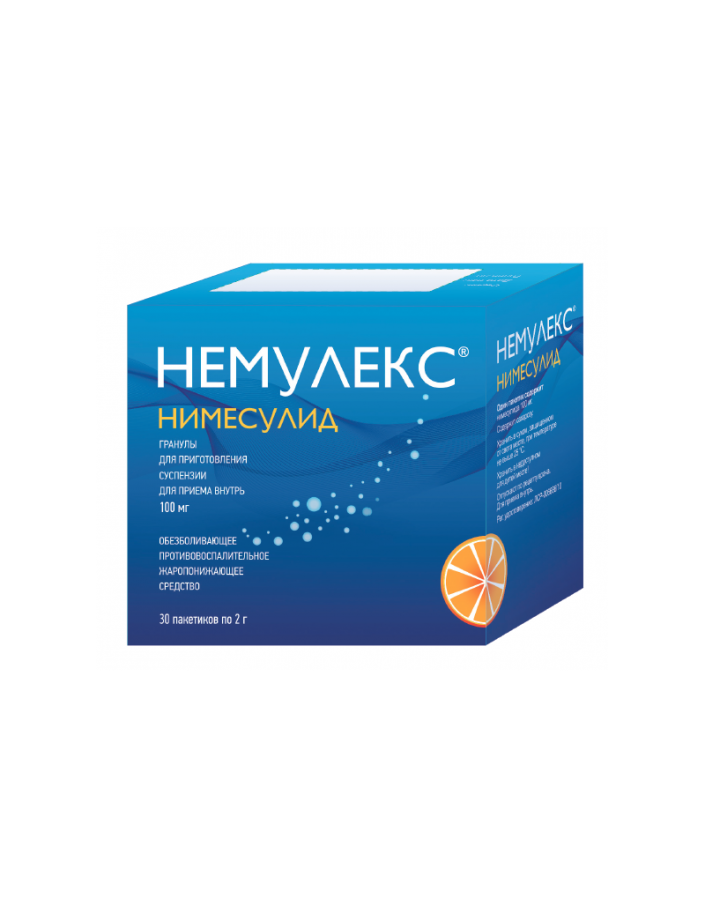 Granules for the preparation of suspensions for oral administration.

CATEGORY OF ACTION ON THE FRUIT. C (The study of reproduction in animals revealed an adverse effect on the fetus, and adequate and well-controlled studies in pregnant women have not been carried out, but the potential benefits associated with the use of drugs in pregnant women may justify its use, despite the possible risk.)

To reduce the risk of side effects, it is necessary to use the drug Nemux in the minimum effective dose of the shortest duration. If the patient’s condition does not improve, treatment should be stopped. It is necessary to stop taking the drug in case of fever or the development of flu-like symptoms on the background of his reception.
When patients taking Nimesulide, symptoms that indicate liver damage (for example, anorexia, nausea, vomiting, abdominal pain, fatigue, dark urine), or increased hepatic transaminases, should be discontinued. It is not recommended to prescribe Nimesulide in such patients in the future. Gastrointestinal bleeding or an ulcer / perforation of the stomach or duodenum may develop at any time with the use of the drug, which may not be accompanied by clinically pronounced symptoms (including pain syndrome). If gastrointestinal bleeding or ulceration occurs, the drug should be withdrawn.
In case of deterioration of renal function, the drug Nemulex should be withdrawn. If the drug is used for more than 2 weeks, monitoring of liver function indicators is necessary. In patients with cirrhosis of the liver or with renal insufficiency with hypoalbuminemia or hyperbilirubinemia, the binding of nimesulide is reduced. Elderly patients most often develop side effects while taking the drug, including gastrointestinal bleeding, perforation, impaired function of the heart, kidneys and liver. Therefore, regular clinical monitoring of the patient’s condition is recommended.The use of nimesulide may adversely affect female fertility and is not recommended for women planning a pregnancy. If during the use of the drug Nemulex, undesirable phenomena arise from the central nervous system and sensory organs, it is necessary to refrain from driving by motor transport and engaging in activities that require an increased concentration of attention and quickness of psychomotor reactions.

There is evidence that nimesulide can reduce the bioavailability of Furosemide, to compete in the binding of plasma proteins with fenofibrate, salicylic acid, tolbutamide. Nimesulide can replace salicylic acid and furosemide (but not warfarin) in plasma proteins. It has no effect on drugs that affect blood glucose concentration and glucose tolerance in diabetic patients treated with various drugs containing sulfonylureas.
It is not recommended to take nimesulide simultaneously with diuretics, which have a damaging effect on renal hemodynamics. Physiological concentrations of unsaturated fatty acids do not affect the binding of nimesulide to serum albumin. At therapeutic concentrations, the binding of nimesulide was not affected by Warfarin, furosemide, glibenclamide, digitoxin. In the presence of nimesulide, the free fractions of Methotrexate can significantly increase.
Taking nimesulide in therapeutic doses orally for a short period does not change the serum profile of Digoxin in patients with mild heart failure. The concentration of lithium in the plasma increases while taking drugs of lithium and nimesulide. Nimesulide may enhance the effect of cyclosporine on the kidneys. The use of Nemulex with glucocorticosteroids, serotonin reuptake inhibitors increases the risk of developing gastrointestinal bleeding.

Symptoms: nausea, vomiting, drowsiness, apathy, gastrointestinal bleeding, increased blood pressure, acute renal failure, respiratory depression;
Treatment: symptomatic and supportive treatment is recommended. There is no specific antidote Nimesulide. Patients admitted to the hospital with symptoms of an overdose of the drug (within 4 hours after taking it or after taking a high dose) recommended gastric lavage, taking Activated carbon (60-100 mg for adults) and / or osmotic type laxatives. Requires regular monitoring of liver and kidney function.
There is no data on the possibility of removing nimesulide using hemodialysis.
Formed diuresis, hemodialysis are ineffective due to the high association of the drug with proteins.