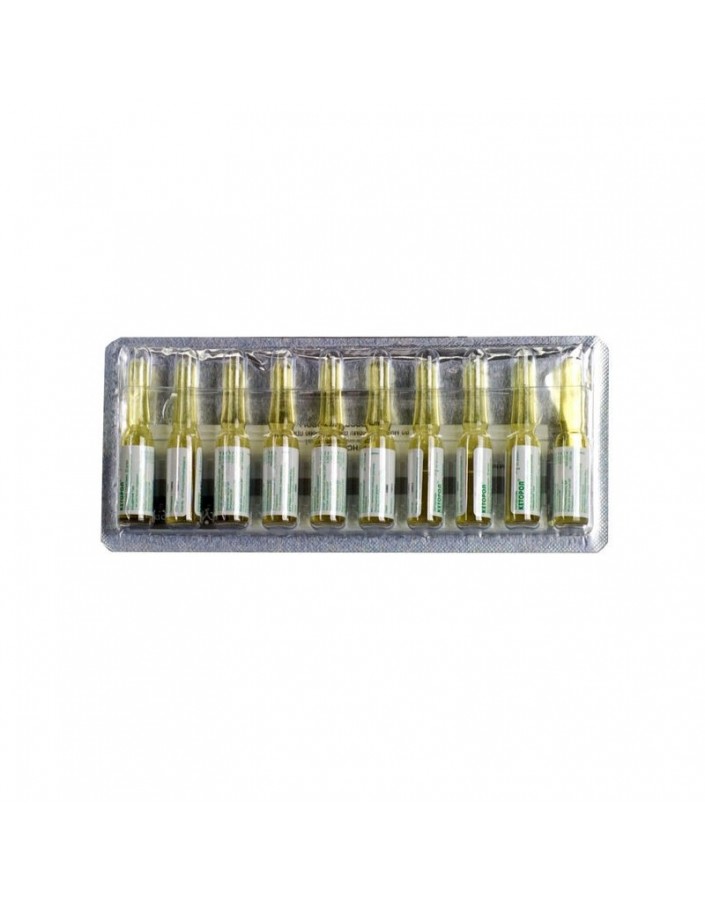 nonsteroidal anti-inflammatory agent (NSAID) with a pronounced analgesic effect.
Ketorolac has a pronounced analgesic effect, also has anti-inflammatory and moderate antipyretic effect.
The mechanism of action is associated with non-selective inhibition of the activity of the enzyme COX-1 and COX-2, mainly in peripheral tissues, resulting in inhibition of the biosynthesis of prostaglandins - modulators of pain sensitivity, thermoregulation and inflammation.Ketorolac is a racemic mixture of -S- and + R-enantiomers, with the analgesic effect due to the -S-enantiomer.
The drug does not affect opioid receptors, does not inhibit respiration, does not cause drug dependence, does not have a sedative and anxiolytic effect.
The strength of the analgesic effect is comparable with morphine, far superior to other NSAIDs.
After intramuscular administration and administration of the drug inside, the beginning of the analgesic effect is noted, respectively, after 30 minutes and 1 hour, the maximum effect is achieved in 1-2 hours.

- pain syndrome of medium and strong intensity of various genesis (including pain in the postoperative period, with cancer).

- hypersensitivity to ketorolac or other NSAIDs;
- "Aspirin Triad";
- bronchospasm;
- angioedema;
- hypovolemia (regardless of the cause that caused it);
- dehydration;
- erosive and ulcerative lesions of the gastrointestinal tract in the acute phase;
- peptic ulcers;
- hypocoagulation (including hemophilia);
- hepatic and / or renal failure (plasma creatinine above 50 mg / l);
- hemorrhagic stroke (confirmed or suspected);
- hemorrhagic diathesis;
- simultaneous reception with other NSAIDs;
- high risk of bleeding (including after surgery);
- violation of blood formation;
- pregnancy, childbirth;
- lactation (breastfeeding);
- children's and teenage age up to 16 years.
Ketorol is not recommended as a means for sedation, supportive anesthesia and anesthesia in obstetric practice because of the high risk of bleeding.
Ketorol is not indicated for the treatment of chronic pain.
WITH caution It should be prescribed for bronchial asthma, cholecystitis, chronic heart failure, arterial hypertension, impaired renal function (plasma creatinine below 50 mg / l), cholestasis, active hepatitis, sepsis, systemic lupus erythematosus, polyps of the nasal mucosa and nasopharynx, in elderly patients over 65 years old.

It should be borne in mind that the effect of the drug on platelet aggregation persists for 24-48 hours.
Hypovolemia increases the risk of adverse reactions from the kidneys.
If necessary, Ketorol can be prescribed in combination with opioid analgesics.
It is not recommended to use Ketorol along with Paracetamol for more than 5 days.
Patients with impaired blood coagulation drug is prescribed only with constant monitoring of the number of platelets; This is especially important in the postoperative period and requires careful control of hemostasis.
Influence on ability to drive motor transport and control mechanisms
Since a significant proportion of patients with Ketorol use develop side effects from the central nervous system (drowsiness, dizziness, headache), it is recommended to avoid performing work requiring increased attention and quick reaction (driving vehicles, working with mechanisms).

The simultaneous use of ketorolac with Acetylsalicylic acid or other NSAIDs, Calcium supplements, glucocorticosteroids, ethanol, corticotropin can lead to the formation of gastrointestinal ulcers and the development of Gastrointestinal bleeding.
Co-administration of Ketorol with paracetamol increases the risk of nephrotoxicity, with Methotrexate, hepato-and nephrotoxicity.
Against the background of the use of Ketorolac, the clearance of methotrexate and lithium may be reduced and the toxicity of these substances may increase. The joint appointment of ketorolac and methotrexate is possible only when using low doses of the latter (in this case, the concentration of methotrexate in the blood plasma should be monitored).
Probenecid reduces plasma clearance and distribution of ketorolac, increases plasma concentration and increases the half-life of the latter.
Co-administration with indirect anticoagulants, Heparin, thrombolytic agents, antiplatelet agents, cefoperazone, cefotetan and Pentoxifylline increases the risk of bleeding.
Ketorol reduces the effect of antihypertensive and diuretic drugs (as the synthesis of prostaglandins in the kidneys is reduced).
When combining Ketorol with opioid analgesics, the dose of the latter can be significantly reduced.
Antacids do not affect the absorption of Ketorolac.
With simultaneous use with Ketorol, the hypoglycemic effect of insulin and oral hypoglycemic drugs is increased (therefore, dose recalculation is necessary).
The joint appointment of Ketorol with sodium valproate causes a violation of platelet aggregation.
Ketorolac increases plasma concentrations of Verapamil and Nifedipine.
When prescribing Ketorol with other nephrotoxic drugs (including with gold medications), the risk of nephrotoxicity increases.
Drugs that block tubular secretion, reduce the clearance of ketorolac and increase its concentration in the blood plasma.
Pharmaceutical Interaction
The solution for injection should not be mixed in the same syringe with morphine sulfate, promethazine and hydroxyzine due to precipitation.
Pharmaceutically incompatible with tramadol solution, lithium preparations.
The solution for injection is compatible with saline, 5% dextrose solution, Ringer's solution and Ringer-lactate solution,solution of plasmalite, as well as with infusion solutions containing aminophylline, Lidocaine hydrochloride, dopamine hydrochloride, short-acting human insulin and heparin sodium salt.

List B. The drug should be stored in a dry, dark place, out of reach of children at a temperature not exceeding 25 ° C.

3 years.
Pharmacy sales terms
The drug is available on prescription.