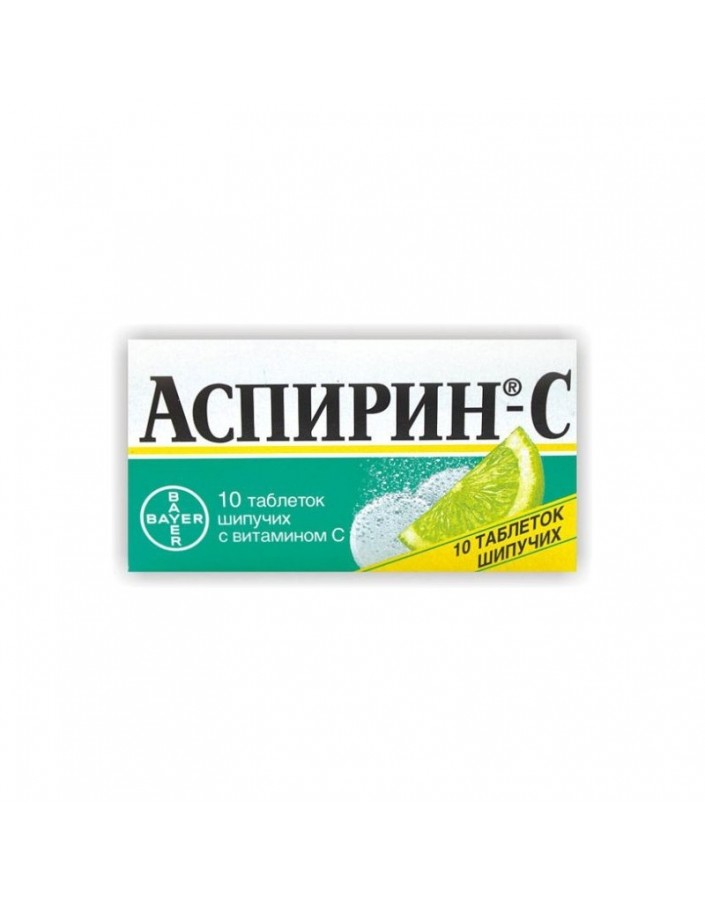 Round, flat, beveled to the edge of the pill in white with a stamp in the form of a trademark ("Bayer" cross) on the one hand, the other side is smooth.

Acetylsalicylic acid belongs to the group of nonsteroidal anti-inflammatory drugs (NSAIDs) with analgesic, antipyretic, anti-inflammatory properties. The mechanism of action is based on the irreversible suppression of cyclooxygenase enzymes that regulate the synthesis of prostaglandins.

Acetylsalicylic acid, when taken orally in dosages of 0.3 g to 1 g, is used to relieve pain and mild fever, such as the common cold and flu, to reduce fever and relieve pain in the joints and muscles.

Acetylsalicylic acid is also used in acute and chronic inflammatory diseases, such as rheumatoid arthritis, osteoarthritis and ankylosing spondylitis.

Acetylsalicylic acid suppresses platelet aggregation by blocking the synthesis of thromboxane A2. It is therefore used in many vascular diseases at a dosage of 75-300 mg per day.

Water-soluble vitamin ascorbic acid is part of the body's defense system against oxygen radicals and other oxidants of endogenous and exogenous origin, which also play an important role in the inflammatory process and the function of leukocytes.

Research results in vitro and ex vivo showed that ascorbic acid has a positive effect on the leukocyte immune response in humans.

Ascorbic acid makes a significant contribution to the synthesis of intracellular substances (flour-polysaccharides), which simultaneously with the collagen fibers are responsible for the integrity of the walls of capillaries.

Acetylsalicylic and salicylic acids are completely bound to plasma proteins and are rapidly distributed in the body. Salicylic acid penetrates into breast milk and passes through the placenta.

The kinetics of salicylic acid excretion is dose dependent, since metabolism is limited by the activity of liver enzymes. The half-life depends on the dose and ranges from 2-3 hours with the use of low doses up to 15 hours - with the use of high doses. Salicylic acid and its metabolites are excreted mainly by the kidneys.

After oral administration, ascorbic acid is absorbed in the intestine by the Na + -dependent active transport system, most actively in the proximal part of the intestine. Absorption is not proportional to the dosage: with an increase in the daily oral dose of ascorbic acid, its concentration in the blood plasma and other body fluids does not increase proportionally, but tends to approach the upper limit.

Ascorbic acid is filtered through the glomeruli and reabsorbed by proximal channels under the action of the Na + -dependent process.The major metabolites are excreted in the urine as oxalates and diketogulonic acid.

Symptomatic treatment of moderate or mild pain syndrome of various origins (headache, toothache, migraine, neuralgia, muscle pain, pain during menstruation) in adults and febrile syndrome in colds and other infectious and inflammatory diseases in adults and children over 15 years of age.

In the I and III trimesters of pregnancy, the use of all drugs containing acetylsalicylic acid is contraindicated.

In the II trimester of pregnancy, acetylsalicylic acid can be administered sporadically. As a long-term therapy, it is recommended not to use.

Salicylates and their metabolites in small quantities pass into breast milk.

When breastfeeding a child, the use of drugs containing acetylsalicylic acid is contraindicated.

Inside Dissolve the effervescent pill in a glass of water and drink after a meal.

The duration of treatment (without consulting a doctor) should not exceed 3-5 days.

In order to reduce the risk of adverse reactions from the gastrointestinal tract, the minimum effective dose of the drug should be applied by the shortest course of treatment.

frequency is unknown - dizziness, tinnitus (usually are signs of overdose).

Violations of the blood and lymphatic system:

frequency is unknown - hemorrhagic syndrome, thrombocytopenia. Bleeding can lead to acute or chronic anemia, iron deficiency anemia with appropriate laboratory and clinical manifestations (asthenia, pallor, hypoperfusion). Hemolysis and hemolytic anemia may be observed in patients with deficiency of glucose-6-phosphate dehydrogenase.

the frequency is unknown - when used in high doses - hyperoxaluria and the formation of urine stones from Calcium oxalate, damage to the glomerular apparatus of the kidneys.

Disorders of the liver and biliary tract:

When these symptoms appear, it is recommended to stop taking the drug and immediately contact your doctor.

Treatment: for signs of poisoning, induce vomiting or gastric lavage, administer activated charcoal and laxative, and consult a doctor. Treatment should be carried out in a specialized hospital department under close supervision, if necessary, correction of acid-base balance, electrolyte balance, urine alkalization, hemodialysis, mechanical ventilation.

Increases the concentration of Digoxin, barbiturates and lithium preparations in the blood plasma. Antacids containing Magnesium and / or aluminum hydroxide slow down and impair the absorption of acetylsalicylic acid.

Reduces the effect of diuretics by reducing glomerular filtration against the background of inhibition of prostaglandin production by the kidneys.

Increases the toxicity of valporaic acid due to its displacement from complexes with blood proteins.

Simultaneous use of deferoxamine with ascorbic acid can increase the toxicity of iron, especially in the heart, leading to cardiac decompensation.