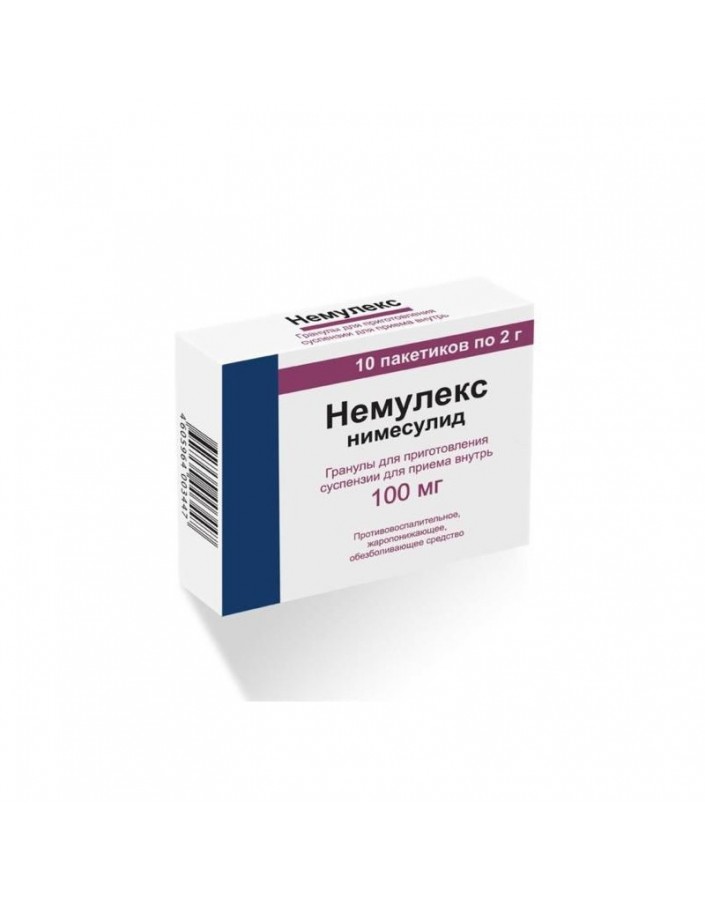 Nemulex has anti-inflammatory, analgesic, antipyretic and angiogregatory effects. Unlike other NSAIDs, it selectively inhibits COX-2, inhibits the synthesis of PG in the focus of inflammation; It has a less pronounced inhibitory effect on COX-1 (rarely causes side effects associated with inhibition of GHG synthesis in healthy tissues).

complete or incomplete combination of bronchial asthma, recurrent nasal polyposis or paranasal sinuses and intolerance to Acetylsalicylic acid (ASA) and other NSAIDs (including a history of);

erosive and ulcerative lesions of the mucous membrane of the stomach and duodenum;

hemophilia and other bleeding disorders;

hepatotoxic reactions with the use of Nimesulide in history;

simultaneous reception of other hepatotoxic drugs;

children up to 12 years;

The minimum effective dose should be administered for as short a period as possible in order to minimize the risk of adverse reactions. The maximum duration of the drug should not exceed 15 days.

From the side of the central nervous system: dizziness, feeling of fear, nervousness, nightmares, headache, drowsiness, encephalopathy (Reye's syndrome).

From the side of blood and blood-forming organs: anemia, eosinophilia, thrombocytopenia, pancytopenia, purpura, lengthening of bleeding time.

There is evidence that nimesulide can reduce the bioavailability of Furosemide, to compete in the binding of plasma proteins with fenofibrate, salicylic acid, tolbutamide. Nimesulide can replace salicylic acid and furosemide (but not warfarin) in connection with plasma proteins. It has no effect on drugs that affect blood glucose concentration and glucose tolerance in diabetic patients who receive sulfonylurea derivatives. It is not recommended to take nimesulide at the same time as diuretics that violate renal hemodynamics.

Taking nimesulide in therapeutic doses orally for a short period does not change the serum profile of Digoxin in patients with mild heart failure.

The concentration of lithium in the plasma increases while taking drugs of lithium and nimesulide. Nimesulide may enhance the effect of cyclosporine on the kidneys. Use with GCS, serotonin reuptake inhibitors increases the risk of gastrointestinal bleeding.

Treatment: symptomatic and supportive treatment is recommended. There is no specific antidote. Patients admitted to hospital with symptoms of an overdose of the drug (within 4 hours after taking it or after taking a high dose) are recommended to wash the stomach, take Activated carbon (60–100 mg for adults) and / or osmotic laxatives. Requires regular monitoring of liver and kidney function. There is no data on the possibility of removing nimesulide using hemodialysis. Forced diuresis, hemodialysis are ineffective due to the high association of the drug with proteins.