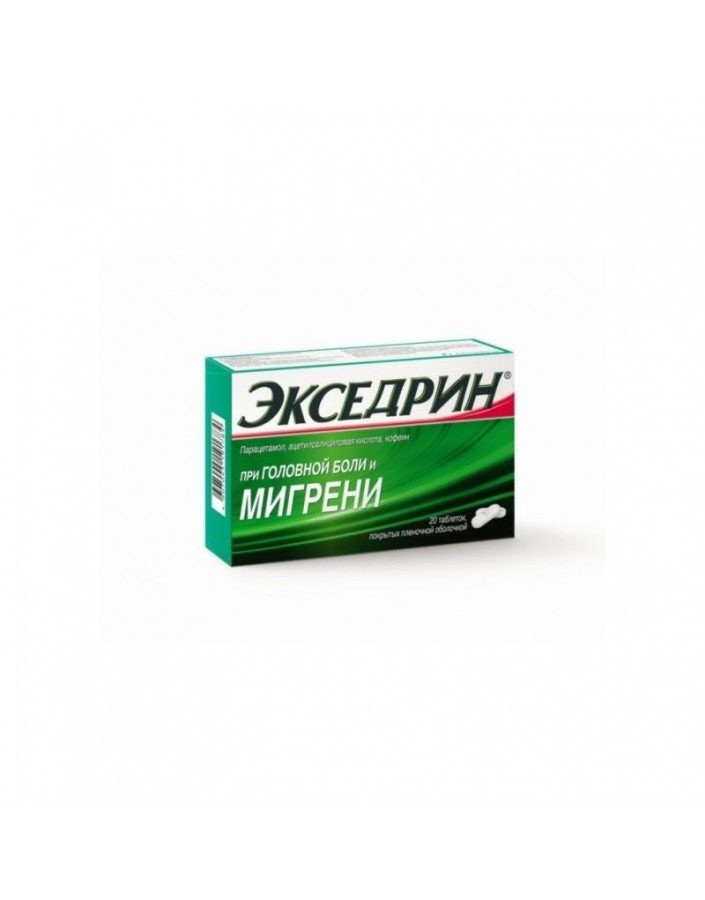 Pain syndrome of medium and light intensity of different origin:

- arthralgia and myalgia (pain in muscles and joints);

The drug is taken orally during or after meals.

Adults and teenagers from 15 years: 1 pill every 4-6 hours

After taking 2 tablets, relief of headache and other types of pain usually comes quickly - after 15 minutes, with migraine, relief usually comes after 30 minutes.

- hypersensitivity to any of the components in the composition of the drug;

- erosive and ulcerative lesions of the gastrointestinal tract in the acute phase;

- complete or incomplete combination of bronchial asthma, recurrent nasal polypnosis and paranasal sinuses and intolerance to Acetylsalicylic acid or other nonsteroidal anti-inflammatory drugs (including in history);

- simultaneous use of other drugs containing Paracetamol, acetylsalicylic acid or other nonsteroidal anti-inflammatory agent;

- children's age up to 15 years (the risk of Reye's syndrome in children with hyperthermia on the background of viral diseases).

Carefully use the drug for gout, liver disease, headaches associated with head injury, taking anticoagulants, hypoglycemic agents, gout or arthritis, as well as while taking drugs containing acetylsalicylic acid or other painkillers and antipyretic components.

Despite the fact that acetylsalicylic acid can be used in the second trimester of pregnancy, the safety of this combination in pregnant and lactating women has not been studied, so the drug is contraindicated in pregnant women (in all trimesters) and lactating.

Prohibited the use of the drug in renal failure.

It is forbidden to use the drug for children under the age of 15 years (the risk of Reye's syndrome in children with hyperthermia on the background of viral diseases).

If after taking the drug the symptoms persist, worsening or new symptoms occur, you should immediately consult a doctor. When taking the drug in the recommended dose, the body receives as much caffeine as is contained in one cup of coffee, therefore, the consumption of caffeine-containing products should be reduced during treatment with this drug in order to avoid the development of nervous excitement, irritability, insomnia and heart palpitations due to caffeine overdose.If you suspect an overdose, you should immediately seek medical help, even if the symptoms are absent. You should refrain from drinking alcohol while taking the drug due to the increased risk of liver damage and gastrointestinal bleeding. Since acetylsalicylic acid slows down blood coagulation, the patient who is to undergo surgery should notify the doctor in advance about taking the drug. Acetylsalicylic acid in low doses reduces the excretion of uric acid, and therefore in patients with predisposition the drug can provoke an attack of gout. With prolonged use of the drug requires monitoring of peripheral blood and the functional state of the liver.

Influence on ability to drive vehicles and work with mechanisms

Not reported on the effect of the drug on the ability to drive and work with mechanisms.

Symptoms due to the presence of paracetamol (when taken in doses of more than 10-15 g / day): for the first 24 hours pale skin, nausea, vomiting, anorexia, abdominal pain, impaired glucose metabolism, metabolic acidosis. Symptoms of abnormal liver function may appear 12-48 hours after an overdose. In severe overdose - hepatic failure with progressive encephalopathy, coma, death; acute renal failure with tubular necrosis (includingin the absence of severe damage to the liver); arrhythmia, pancreatitis. Hepato-toxic effect in adults appears when taking 10 g or more.

Symptoms due to the presence of acetylsalicylic acid (when taken in doses of more than 150 mg / kg): for mild intoxication - nausea, vomiting, tinnitus, blurred vision, dizziness, severe headache. In severe poisoning, hyperventilation of the central lung (dyspnea, asphyxiation, cyanosis, cold sticky sweat, respiratory paralysis), respiratory acidosis. The greatest risk of chronic intoxication is observed in children and the elderly when taking for several days more than 100 mg / kg / day. In case of moderate and severe poisoning, hospitalization is necessary.

Symptoms caused by the presence of caffeine (when taken in doses of more than 300 mg / day): gastralgia, agitation, anxiety, agitation, restlessness, confusion, delirium, dehydration, tachycardia, arrhythmia, hyperthermia, frequent urination, headache, increased tactile or pain sensitivity, tremor, or muscle twitching; nausea and vomiting, sometimes with blood; tinnitus, epileptic seizures (in acute overdose - tonic-clonic). Treatment: control of the acid-base state and electrolyte balance. Depending on the state of metabolism - the introduction of sodium bicarbonate, sodium citrate or sodium lactate. Increasing alkalinity increases the excretion of acetylsalicylic acid due to alkalization of urine.Washing the stomach in the first 4 hours, provoking vomiting, taking Activated carbon, laxative drugs, introducing donators of SH-groups and precursors of the synthesis of glutathione methionine for 8-9 hours after overdose and acetylcysteine ​​- for 8 hours.

The drug can enhance the effects of Heparin, indirect coagulants, reserpine, steroid hormones and hypoglycemic drugs.

Simultaneous use with other NSAIDs, Methotrexate increases the risk of side effects. Reduces the effectiveness of spironolactone, Furosemide, antihypertensive drugs, as well as anti-gout drugs that promote the excretion of uric acid. Barbiturates, rifampicin, salicylamide, antiepileptic drugs and other inducers of liver microsomal enzymes contribute to the formation of toxic paracetamol metabolites that affect liver function. Metoclopramide accelerates the absorption of paracetamol. Under the influence of paracetamol, the half-life of chloramphenicol is increased 5 times. With repeated use of paracetamol can enhance the effect of anticoagulants (coumarin derivatives).

The simultaneous intake of paracetamol, acetylsalicylic acid and alcoholic beverages increases the risk of developing hepatotoxic effects. Caffeine accelerates the absorption of ergotamine.