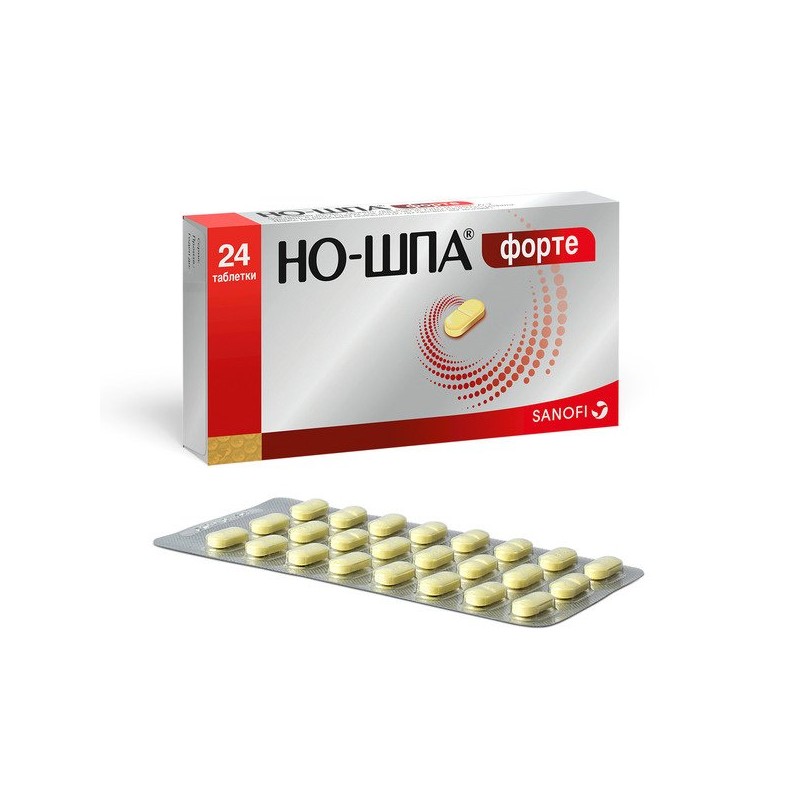 An antispasmodic agent, an isoquinoline derivative, is similar in chemical structure and pharmacological properties to papaverine, but has a stronger and more lasting effect. It has a powerful antispasmodic effect on smooth muscles due to inhibition of the PDE enzyme. The PDE enzyme is necessary for the hydrolysis of cAMP to AMP. Inhibition of PDE leads to an increase in the concentration of cAMP, which triggers the following cascade reaction: high concentrations of cAMP activate cAMP-dependent phosphorylation of myosin light chain kinase (MLCC). Phosphorylation of MLCC leads to a decrease in its affinity for Ca2+-calodulin complex, as a result of this inactivated form of MLCK supports muscle relaxation. In addition, cAMP affects the cytosolic concentration of Ca ion.2+ thanks to the stimulation of sa transport2+ into extracellular space and sarcoplasmic reticulum. This decreasing Ca ion concentration2+ effect of Drotaverine through cAMP explains the antagonistic effect of drotaverine in relation to Ca2+.

In vitro, Drotaverine inhibits PDE4 isoenzyme without inhibiting PDE3 and PDE5 isoenzymes. Therefore, the effectiveness of drotaverine depends on the concentration of PDE4 in the tissues (the content of PDE4 in different tissues varies).PDE4 is most important for suppressing the contractile activity of smooth muscles, and therefore selective inhibition of PDE4 may be useful for the treatment of hyperkinetic dyskinesias and various diseases involving the spastic state of the gastrointestinal tract.

Hydrolysis of cAMP in the myocardium and vascular smooth muscle occurs mainly with the aid of the PDE3 isoenzyme, which explains the fact that with high spasmolytic activity in Drotaverine there are no serious side effects from the heart and vessels and pronounced effects on the cardiovascular system.

Drotaverine is effective for smooth muscle spasms of both neurogenic and muscular origin. Regardless of the type of vegetative innervation, Drotaverine relaxes the smooth muscles of the gastrointestinal tract, the biliary tract, and the urogenital system.

Due to its vasodilating action, Drotaverine improves blood circulation in tissues.

Compared with papaverine, drotaverine when administered orally is faster and more completely absorbed from the gastrointestinal tract. Absorption is 100%. After metabolism, during the "first passage" through the liver, 65% of the dose of drotaverine is fed into the systemic circulation. WITHmaxin blood plasma is reached in 45-60 minutes.

Drotaverine is evenly distributed in the tissues, penetrates into the smooth muscle cells.

As an adjuvant therapy:

- children's age (clinical studies in children were not conducted);

- hereditary lactose intolerance, lactase deficiency, galactosemia, glucose-galactose malabsorption syndrome (due to the presence of lactose in the composition of the tablets);

with caution use the drug for arterial hypotension during pregnancy.

According to a limited number of retrospective data on the use of the drug in humans and research data in animals, the use of drotaverine during pregnancy did not have any teratogenic,neither embryotoxic action, as well as adverse effects on the course of pregnancy.

In pregnancy, the drug should be used with caution and only in cases where the potential benefit of therapy for the mother outweighs the possible risk to the fetus.

Studies on the allocation of drotaverine with breast milk in animals have not been conducted, clinical data are also missing, so the drug is contraindicated during lactation (breastfeeding).

Contraindicated for use in severe liver failure.

Contraindicated for use in severe renal failure.

Clinical studies in children has not been conducted.

When using the drug in patients with arterial hypotension requires increased caution.

Each pill No-spa® Forte contains 104 mg of lactose. When taken in accordance with the recommended dosing regimen, each dose can receive up to 156 mg of lactose (1.5 pills of No-spa® forte), which can cause in patients suffering from lactose intolerance, disorders of the gastrointestinal tract. This form of the drug is unacceptable for patients with lactase deficiency, galactosemia, or glucose / galactose malabsorption syndrome.

When ingested in therapeutic doses, Drotaverine does not affect the ability to drive vehicles and perform work that requires high concentration of attention.

Drotaverine overdose was associated with impaired heart rate and conduction, including complete blockade of the bundle of the His bundle and cardiac arrest, which can be fatal.

Treatment: in case of overdose, patients should be under medical supervision. If necessary, symptomatic treatment aimed at maintaining the basic functions of the body should be carried out.

With simultaneous use of No-spa® Forte may decrease the anti-Parkinsonian effect of levodopa, i.e. increased rigidity and tremor.

With simultaneous use of No-spa® Forte enhances the antispasmodic action of papaverine, bendazole and other antispasmodics (including m-anticholinergics).

With simultaneous use of No-spa® Forte reduces spasmogenic activity of morphine.

With simultaneous use of phenobarbital increases the severity of the antispasmodic action of drotaverine.