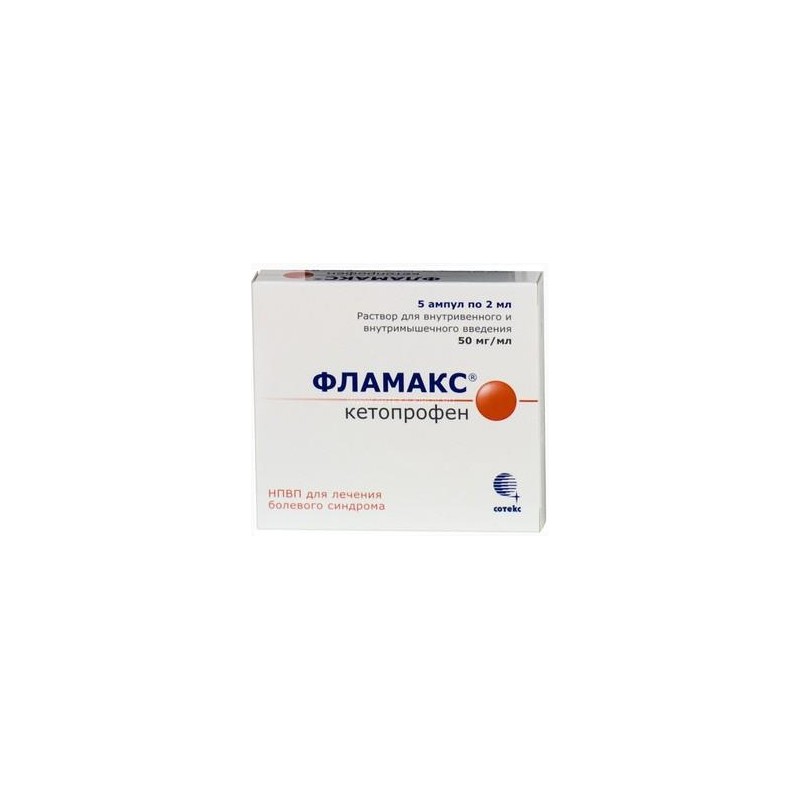 In the package of 5 ampoules of 2 ml.

Flamax - non-steroidal anti-inflammatory drug, a derivative of propionic acid. It has analgesic, anti-inflammatory and antipyretic effects, inhibits platelet aggregation. By acting on the cyclooxygenase and lipoxygenase metabolism of arachidonic acid, Ketoprofen inhibits the synthesis of prostaglandins, leukotrienes and thromboxanes. The analgesic effect is due to both central and peripheral mechanisms. Possesses antibradikininovoy activity, stabilizes lysosomal membranes.

- hypersensitivity to ketoprofen or other components of the drug, as well as salicylates or other nonsteroidal anti-inflammatory drugs;
- bronchial asthma, rhinitis or urticaria in history, caused by the intake of Acetylsalicylic acid or other NSAIDs;
- peptic ulcer of the stomach or duodenum in the acute stage;
- non-specific ulcerative colitis, Crohn's disease in the acute stage;
- hemophilia and other bleeding disorders;
- children's age (up to 15 years);
- severe liver failure;
- severe renal failure (creatinine clearance less than 30 ml / min);
- decompensated heart failure;
- The postoperative period after coronary artery bypass surgery;
- gastrointestinal, cerebrovascular and other bleeding (or suspected bleeding);
- III trimester of pregnancy, lactation.

Contraindicated in the III trimester of pregnancy and lactation.

With simultaneous use of ketoprofen and Warfarin or lithium salts, patients should be under the strict supervision of a physician. Care must be taken when prescribing the drug to patients with ulcerative diseases of the gastrointestinal tract in history, renal or hepatic insufficiency, as well as receiving coumarin anticoagulants. Like the rest of the drugs in this group, it can mask the symptoms of infectious diseases. During treatment, it is necessary to control the picture of peripheral blood and the functional state of the liver and kidneys. If necessary, determine the 17-ketosteroids drug should be canceled 48 hours before the study. In violation of the functions of the liver and kidneys, a dose reduction and careful observation are necessary. During the period of treatment, care must be taken when driving vehicles and engaging in other potentially hazardous activities that require increased concentration and psychomotor speed.

With the simultaneous appointment of ketoprofen and loop diuretics nephrotoxic effect of both drugs is enhanced. Reduces the effectiveness of uricosuric drugs, enhances the effect of anticoagulants, antiplatelet agents, fibrinolytics, ethanol, side effects of glucocorticosteroids and mineralocorticosteroids, estrogens; reduces the effectiveness of antihypertensive drugs and diuretics. Joint reception with other NSAIDs, glucocorticosteroids, ethanol, corticotropin can lead to the formation of ulcers and the development of Gastrointestinal bleeding, to an increase in the risk of development of renal impairment. The simultaneous appointment with oral anticoagulants, Heparin, thrombolytic agents, antiplatelet agents, cefaperazon, cefamundol and cefotetan increases the risk of bleeding. Increases the hypoglycemic effect of insulin and oral hypoglycemic drugs (dose recalculation is required). Inductors of microsomal oxidation in the liver (phenytoin, ethanol, barbiturates, rifampicin, phenylbutazone, tricyclic antidepressants) increase the production of hydroxylated active metabolites. Joint appointment with sodium valproate leads to a decrease in platelet aggregation. Increases plasma concentration of Verapamil and Nifedipine, lithium preparations, Methotrexate . Antacids and colestyramine reduce absorption. Enhances the hematotoxicity of myelotoxic drugs.In order to avoid sediment, do not mix ketoprofen and tramadol in one bottle.