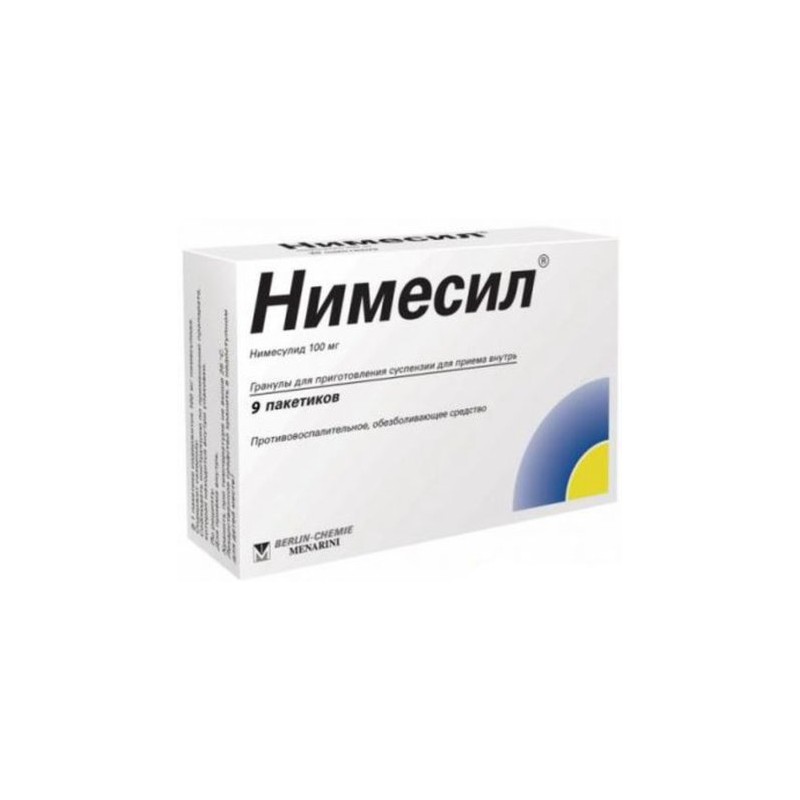 NIMESIL GRANULES FOR THE PREPARATION OF SUSPENSIONS 100MG SACHETS 2G

Hypersensitivity (including to any of the components of the drug, Acetylsalicylic acid or other NSAIDs), acute bleeding in the gastrointestinal tract, gastric ulcer and duodenal ulcer, severe renal impairment, pregnancy, breastfeeding.

Contraindicated in pregnancy. At the time of treatment should stop breastfeeding.

Inside, after eating, adults, 100 mg 2 times a day (the contents of the bag poured into a glass and dissolved in water).A temporary dose increase is possible depending on the severity of the symptoms and the patient's susceptibility. Elderly patients need dose adjustment.

Nimesil is usually well tolerated, however, at the beginning of a course of treatment or at high dosages, the following disorders may occur.

From the side of the central nervous system: rarely - dizziness, headache, drowsiness, encephalopathy (Reye's syndrome), fear, nervousness, nightmares.
With a decrease in dosages and a subsequent more careful increase in dose, these phenomena spontaneously disappear.

Nimesulide enhances the action of drugs that reduce blood clotting; may decrease the effects of Furosemide. Nimesulide may increase the possibility of side effects when taking Methotrexate. Increases the level of lithium in the plasma. Due to the high degree of nimesulide binding to plasma proteins, patients who are simultaneously treated with hydantoin and sulfonamides should be under the supervision of a physician, undergoing examination at short intervals. Nimesulide may enhance the effect of cyclosporine on the kidneys.

Treatment: symptomatic and supportive therapy. The specific antidote is absent.