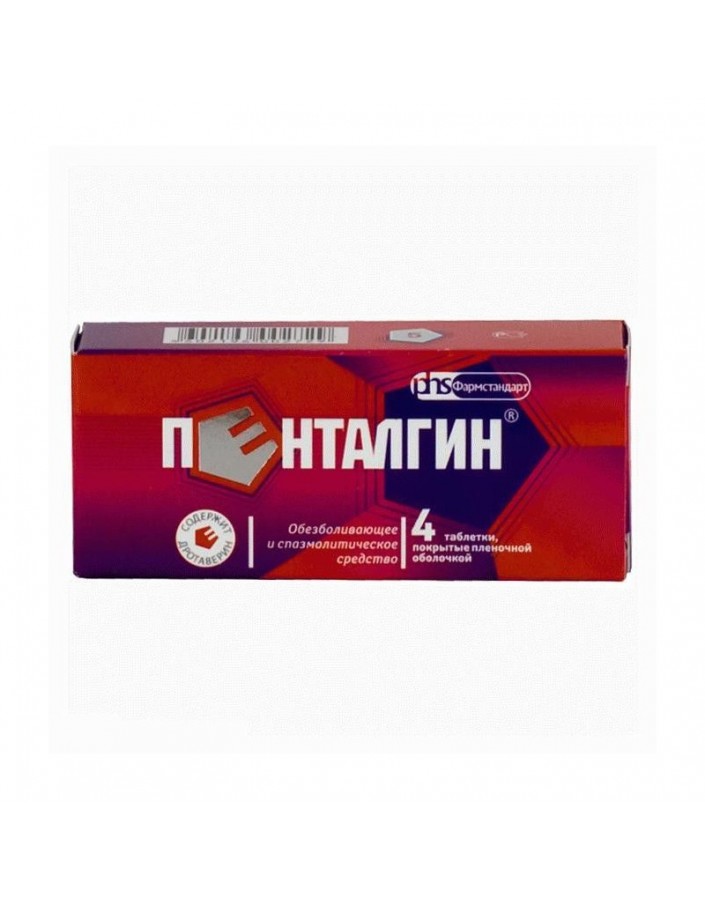 Paracetamol.
Analgesic antipyretic, has antipyretic and analgesic effect due to blockade of COX in the central nervous system and the effect on pain centers and thermoregulation.

NPVS, has anti-inflammatory, analgesic and antipyretic effects associated with non-selective suppression of the activity of COX, which regulates the synthesis of prostaglandins.

Psychogogic, causes dilation of blood vessels of skeletal muscles, heart, kidneys; increases mental and physical performance, helps eliminate fatigue and drowsiness; increases the permeability of histohematogenous barriers and increases the bioavailability of non-narcotic analgesics, thereby enhancing the therapeutic effect. It has a tonic effect on the vessels of the brain.

It has myotropic spasmolytic effect due to inhibition of PDE 4, acts on the smooth muscles of the gastrointestinal tract, biliary tract, genitourinary system, blood vessels.

Histamine H 1 receptor blocker. It has an antispasmodic and mild sedative effect, reduces the effects of exudation, and also enhances the analgesic effect of paracetamol and naproxen.

- Pain syndrome of various genesis, including:
- Pain in the joints, muscles.
- Radiculitis.
- Algodismenorrhea.
- Neuralgia.
- Toothache.
- Headache (including due to spasm of cerebral vessels).

With caution should use the drug in patients with:

If any of the listed diseases and conditions are present, the patient should consult a doctor before using the drug.

The drug is contraindicated during pregnancy and lactation (breastfeeding).

Do not exceed the indicated dose of the drug.

On the part of the digestive system: Erosive and ulcerative lesions of the gastrointestinal tract, nausea, vomiting, epigastric discomfort, abdominal pain, constipation, and impaired liver function.

On the part of the urinary system: Impaired renal function.

On the part of the sense organs: Hearing loss, tinnitus, increased intraocular pressure in patients with angle-closure glaucoma.

Use for violations of the liver: Contraindicated use in severe liver failure.

Application for violations of renal function: Contraindicated use for severe renal failure.

Impact on the ability to drive motor vehicles and control mechanisms: In some cases, the concentration of attention and speed of psychomotor reactions may decrease, therefore, during the treatment period, the patient must be careful when driving vehicles and engaging in other potentially dangerous activities requiring increased concentration and psychomotor reactions.

It is necessary to avoid the simultaneous use of the drug Pentalgin with other agents containing paracetamol and / or NSAIDs, as well as with means to alleviate the symptoms of cold, flu and nasal congestion.

When using the drug Pentalgin for more than 5–7 days, it is necessary to monitor the indicators of peripheral blood and the functional state of the liver.

Paracetamol distorts the results of laboratory studies of glucose and uric acid in plasma.

If it is necessary to determine the 17-ketosteroids, Pentalgin should be discontinued 48 hours before the study. Note that naproxen increases bleeding time.

The effect of caffeine on the central nervous system depends on the type of nervous system and can manifest itself as excitation and inhibition of higher nervous activity.

During the treatment period, the patient should avoid drinking alcohol.

While taking the drug Pentalgin with barbiturates, tricyclic antidepressants, rifampicin, ethanol increases the risk of hepatotoxic action (these combinations should be avoided).

Paracetamol enhances the effect of indirect anticoagulants and reduces the effectiveness of uricosuric drugs.

The simultaneous use of paracetamol with ethanol increases the risk of acute pancreatitis.

Inhibitors of microsomal oxidation (including cimetidine) reduce the risk of hepatotoxic action of paracetamol.

Naproxen can cause a decrease in the diuretic effect of Furosemide, enhance the effect of indirect anticoagulants, increase the toxicity of sulfonamides and Methotrexate, reduces the elimination of lithium and increases its concentration in the blood plasma.

The combined use of caffeine and barbiturates, primidone, anticonvulsants (derivatives of hydantoin, especially phenytoin) may increase metabolism and increase the clearance of caffeine; while taking caffeine and cimetidine, oral contraceptives, disulfiram, Ciprofloxacin, norfloxacin - a decrease in the metabolism of caffeine in the liver (slowing its excretion and increasing blood concentrations).

Simultaneous consumption of caffeinated beverages and other CNS stimulants can lead to excessive stimulation of the CNS.

With simultaneous use of drotaverine may weaken the anti-Parkinsonian effect of levodopa.

With simultaneous use of pheniramine with tranquilizers, hypnotics, MAO inhibitors, ethanol, it is possible to increase the inhibitory effect on the central nervous system.