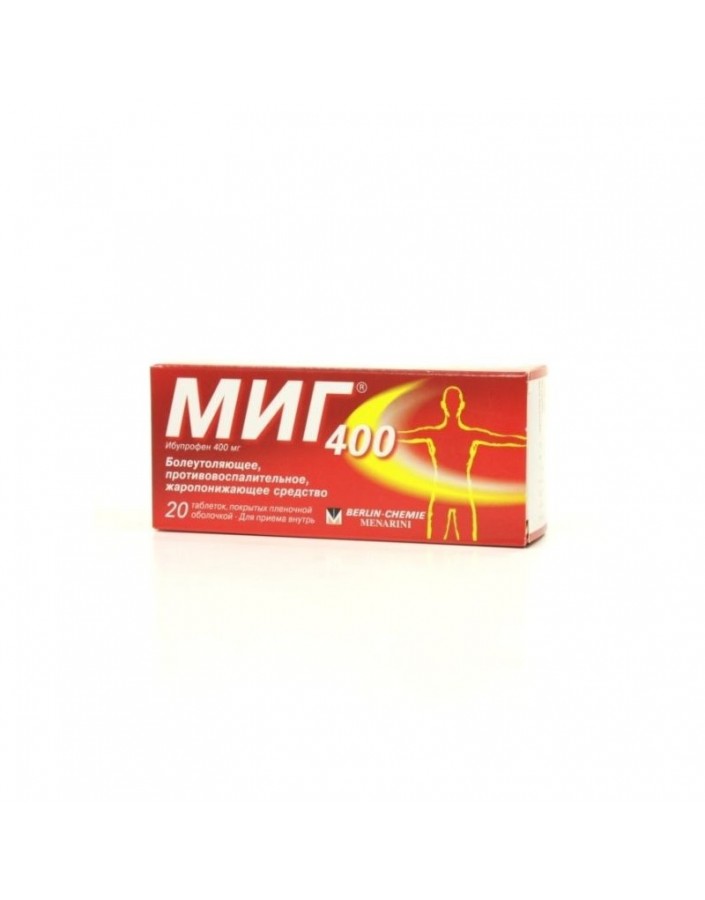 pharmachologic effect
MIG 400 is a nonsteroidal anti-inflammatory drug (NSAIDs). Ibuprofen is a derivative of propionic acid and has analgesic, antipyretic and anti-inflammatory effects due to non-selective blockade of COX-1 and COX-2, as well as an inhibitory effect on the synthesis of prostaglandins.

The analgesic effect is most pronounced for inflammatory pain. Analgesic activity of the drug is not a narcotic type.

Contraindications
Hypersensitivity to the drug;
Hypersensitivity to Acetylsalicylic acid or other NSAIDs in history.
Erosive and ulcerative diseases of the gastrointestinal tract (including gastric ulcer and duodenal ulcer in the acute stage, Crohn's disease, ulcerative colitis).
"Aspirin" asthma.
Hemophilia and other bleeding disorders (including hypocoagulation), hemorrhagic diathesis.
Bleeding of any etiology.
Deficiency of glucose-6-phosphate dehydrogenase.
Pregnancy. and lactation period.
Children's age up to 12 years.
Diseases of the optic nerve.

Dosage and administration
MiG 400 is taken orally. Dosing regimen set individually depending on the evidence.

In patients with impaired renal function, liver or heart, the dose should be reduced.

Side effects
On the part of the digestive system: NPVS-gastropathy - abdominal pain, nausea, vomiting, heartburn, loss of appetite, diarrhea, flatulence,constipation; rarely, ulceration of the gastrointestinal tract mucosa, which in some cases is complicated by perforation and bleeding; possible irritation or dryness of the oral mucosa, pain in the mouth, ulceration of the mucous membrane of the gums, aphthous stomatitis, pancreatitis, hepatitis.

On the part of the senses: hearing loss, ringing or tinnitus, toxic lesion of the optic nerve, blurred vision or double vision, scotoma, dryness and eye irritation, conjunctival edema and eyelid (allergic origin).

With prolonged use of the drug in high doses increases the risk of ulceration of the gastrointestinal tract mucous membrane, bleeding (gastrointestinal, gingival, uterine, hemorrhoidal), visual impairment (color vision disorders, scotomas, damage to the optic nerve).

Storage conditions
In the dark place at a temperature of no higher than 20 ° C.