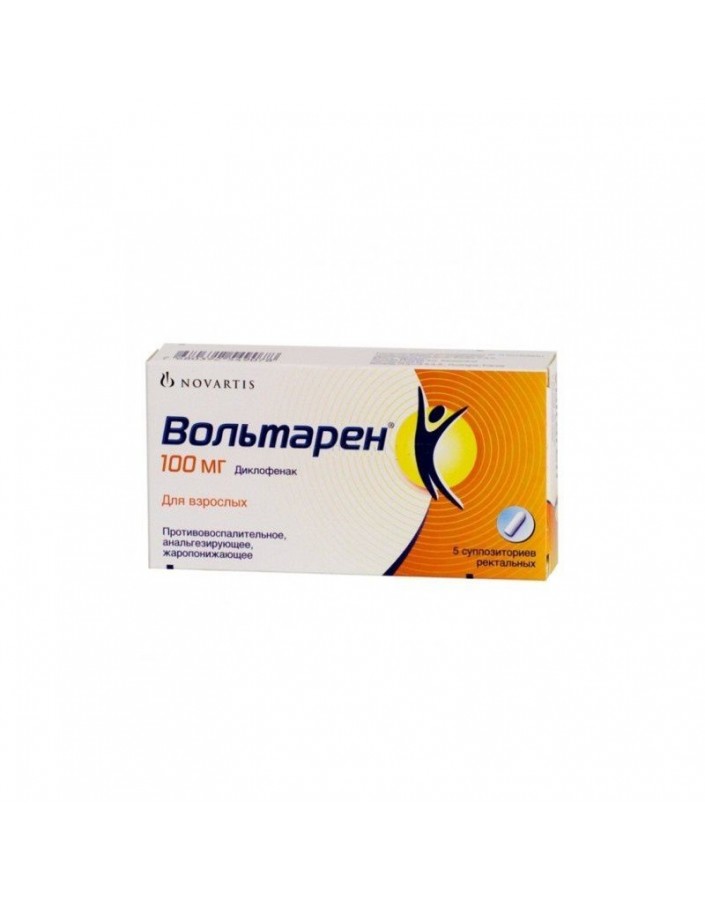 NSAIDs with pronounced anti-inflammatory, analgesic and antipyretic effects. The main role in the mechanism of action of the drug plays the inhibition of the biosynthesis of prostaglandins, which are important in the pathogenesis of inflammation, pain and fever.
In rheumatic diseases, the anti-inflammatory and analgesic action of Voltaren leads to a significant decrease in the severity of pain (both at rest and when moving), morning stiffness, swelling of the joints and, thus, to improve the functional state of the patient.
When nonspecific inflammation that occurs after injuries or operations, Voltaren reduces pain (spontaneous and arising from movements) and inflammatory edema.

Suction
After ingestion of enteric-coated tablets, Voltaren's active ingredient, Diclofenac, is rapidly and completely absorbed from the intestines. Food slows down the rate of absorption, but the amount of active substance to be absorbed does not change.
After oral administration of retard tablets, the systemic bioavailability of diclofenac is 82% of the corresponding figure after oral administration of the enteric Voltaren pill in the same dose.The absorption of diclofenac with the use of suppositories is somewhat slower than when taking enteric Voltaren tablets.
After a single oral administration of Voltaren's enteric pill at a dose of 50 mg Cmax Diclofenac in plasma is reached in approximately 2 hours and is 1.5 μg / ml (5 μmol / l); after a single oral administration of retard pills at a dose of 100 mg (or 75 mg), the corresponding figures are 4 hours and 0.5 μg / ml (1.6 μmol / l) or 0.4 μg / ml (1.25 μmol / l); after a single use of the rectal suppository at a dose of 50 mg - 1 hour and 2/3 of the value of Cmax after ingestion enteric pills at a dose of 50 mg; after a single intramuscular injection of 75 mg of Voltaren — 20 min and 2.5 μg / ml (8 μmol / l); after intravenous administration of 75 mg of Voltaren for 2 h, 1.9 mcg / ml (5.9 mcmol / l). In children, the concentration of diclofenac in plasma at the appointment of equivalent doses of Voltaren (in mg / kg) is similar to the corresponding indicators in adults. The concentration of diclofenac in plasma is linearly dependent on the magnitude of the dose used.
After repeated administration of the drug, its pharmacokinetics does not change.
Distribution
Cumulation of diclofenac is not noted.
99.7% of diclofenac binds to serum proteins, mainly (99.4%) with albumin.
Diclofenac penetrates the synovial fluid: here its maximum concentration is noted 2-4 hours later than in plasma.
Metabolism
After taking Voltaren inside the body, approximately 50% of the active substance is metabolized during the "first pass" through the liver. Diclofenac is extensively metabolized.Among its several metabolites, two are pharmacologically active, but to a lesser extent than diclofenac.
Removal
T1/2 from synovial fluid - 3-6 hours. Thus, the concentration of diclofenac (after taking an enteric tablet) in the joint cavity begins to exceed its concentration in plasma after 4-6 hours and remains higher for 12 hours.
The systemic clearance of the active substance is approximately 263 ml / min. T1/2 - 1-2 hours. Approximately 60% of the dose is excreted in the form of metabolites by the kidneys; less than 1% is excreted in the urine unchanged. The remainder is excreted as bile metabolites.
Pharmacokinetics in special clinical situations
Not found significant differences in pharmacokinetic parameters of diclofenac, depending on age.
In patients with severe impaired renal function (creatinine clearance less than 10 ml / min), the proportion of excretion of metabolites with bile increases, so an increase in their concentration in the blood is not observed.
In patients with chronic hepatitis or compensated liver cirrhosis, the pharmacokinetic parameters of diclofenac are the same as in patients without liver disease.

prescribed in the initial daily dose of 100-150 mg. In cases with relatively mild symptoms, as well as with prolonged therapy, a dose of 75-100 mg / day is sufficient. The daily dose, as a rule, is distributed into 2-3 doses. If necessary, to influence night pain or morning stiffness in addition to taking the drug during the day, Voltaren is prescribed in the form of suppositories at bedtime. The daily dose of the drug should not exceed 150 mg.
At primary algomenorrhea the daily dose is selected individually, it is 50-150 mg. The initial dose may be equal to 50-100 mg; if necessary, for several menstrual cycles, it can be increased to 150 mg / day. The drug intake should be started as soon as possible after the appearance of the first painful symptoms. The duration of the drug is several days and depends on the dynamics of regression of symptoms.
Tablets should be taken whole, without chewing, and drink down with liquid. The preferred drug intake before meals.
For treatment migraine attacks recommend the use of rectal suppositories. Treatment with the drug in a dose of 100 mg begins at the first sign of an approaching attack. If necessary, an additional suppository (100 mg) can be applied on the same day. It is also possible in / m the introduction of Voltaren.
Rectal suppositories should not be cut into pieces.
Voltaren solution for injection should be administered in / m. The duration of parenteral use of the drug should not exceed 2 days; if necessary, treatment is continued with Voltarenum in the form of pills or rectal suppositories.
Voltaren enter deep into / m in the upper outer quadrant of the buttocks; during the day, use no more than 2 ampoules (150 mg) of the drug.
Immediately before i.v. administration, Voltaren should be diluted as follows: 100-500 ml of 0.9% sodium chloride solution or 5% glucose solution is mixed with sodium bicarbonate solution for injection (0.5 ml 8.4%, or 1 ml of 4.2% solution, or an appropriate amount of solution other concentration); To the resulting infusion solution add 1 amp contents. Voltaren (75 mg). Depending on the severity of pain syndrome, infusion is carried out for 30-180 minutes. In order to prevent postoperative pain after surgery, infusion of a “shock” dose of the drug is carried out (25-50 mg in 15-60 minutes), and further infusion of the drug is continued at a rate of 5 mg / h (until a maximum daily dose of 150 mg is reached).
Children and adolescents aged 6 to 15 years appoint only tablets, enteric-coated, 25 mg.The drug is prescribed in a daily dose of 0.5-2 mg / kg of body weight; this dose is divided into 2-3 doses, depending on the severity of symptoms.
In the treatment of juvenile rheumatoid arthritis The daily dose may be increased to 3 mg / kg, which is the maximum daily dose.
Adolescents aged 16 to 18 years You can also prescribe pills of 50 mg.

- peptic ulcer of the stomach or intestines;
- Anamnestic information about attacks of asthma, urticaria, acute rhinitis associated with the use of Acetylsalicylic acid or other nonsteroidal anti-inflammatory drugs;
- known in this patient hypersensitivity to diclofenac sodium or other ingredients of the drug;
- proctitis, hemorrhoids, rectal bleeding (only for rectal suppositories);
- children's and teenage age up to 18 years (only for solution for injections and retard tablets);
- Hypersensitivity to sodium metabisulfite (only for solution).

In pregnancy, Voltaren use should be considered only as a necessary measure, it should be used in the smallest effective dose. Voltaren is not recommended for use in the third trimester of pregnancy (the danger of inhibition of uterine contractility and premature closure of the arterial duct).
When Voltaren was administered orally at 50 mg at 8-hour intervals, its penetration into breast milk of nursing mothers was noted; however, its concentration in milk was so low that unwanted effects in infants were not observed.
The use of Voltaren in the form of a solution for injection during pregnancy and lactation is not recommended.

Caution should be exercised in the appointment of Voltaren in patients with a history of indications of a peptic ulcer of the stomach or intestines, patientswho have complaints indicating gastrointestinal diseases, patients with ulcerative colitis, Crohn's disease, as well as patients with impaired liver function; It is necessary to carefully monitor these categories of patients during the period of use of the drug.
In cases where a decrease in circulating blood volume is possible (particularly when taking diuretics; before or after large surgeries), as well as in patients with impaired renal function, chronic heart failure, arterial hypertension, in elderly patients, Voltaren should be used with caution and under the control of renal function due to the risk of reduced renal blood flow.
Special attention is needed in the treatment of elderly patients (especially in debilitated patients and patients with reduced body weight), since ulceration, perforation and bleeding from the gastrointestinal tract in them lead to more serious consequences, can occur in any period of therapy, without precursors or burdened anamnesis. This cohort of patients Voltaren is prescribed in the smallest effective dose.
If any abnormalities in liver function persist, Voltaren should be abolished. Cancellation of the drug is also shown in cases of skin rash, eosinophilia, in the event of ulcerative lesions of the gastrointestinal tract, bleeding from the gastrointestinal tract.
When using Voltaren in patients with hepatic porphyria, a porphyrin crisis may develop.Therefore, the treatment of such patients requires special care.
Voltaren can temporarily inhibit platelet aggregation, and therefore requires careful monitoring of patients with impaired hemostasis, taking the drug.
The prepared Voltaren infusion solution should be transparent and free of crystals or precipitates.
Control of laboratory parameters
In the process of long-term treatment with Voltaren, systematic monitoring of liver function and peripheral blood picture is necessary.
Use in pediatrics
It is not recommended to use in children pills and rectal suppositories containing 50 mg and a larger amount of the drug, as well as a solution of the drug for injection (due to the relatively large amount of the active substance in them).
Influence on ability to drive motor transport and control mechanisms
If during the treatment with Voltaren, the patient has dizziness or other abnormalities in the central nervous system, the patient should be advised to refrain from practicing potentially hazardous activities that require increased attention and quickness of psychomotor reactions.

Voltaren's overdose is not characterized by a specific clinical picture. It is shown gastric lavage, the appointment of Activated carbon, as well as symptomatic therapy.
The use of forced diuresis, dialysis or blood transfusion is hardly justified.

Voltaren can increase the concentration of lithium and Digoxin in the plasma while using it with these drugs.
Voltaren, like other nonsteroidal anti-inflammatory drugs, can reduce the effects of diuretics. The simultaneous use of Voltaren with potassium-sparing diuretics can lead to an increase in the level of potassium in the blood.
Simultaneous use of Voltaren with other nonsteroidal anti-inflammatory drugs may increase the risk of side effects.
Although clinical studies have not established the effect of Voltaren on the effect of anticoagulants, there are some reports of an increased risk of hemorrhages in cases of their joint use. Careful observation of patients receiving these drugs at the same time is recommended. Separate cases of bleeding with the simultaneous use of Voltaren and anticoagulants are described.
Voltaren can be prescribed in conjunction with oral hypoglycemic drugs and usually does not affect their clinical action. There are, however, reports of the development of hypoglycemia or hyperglycemia in diabetic patients who used Voltaren concurrently with hypoglycemic drugs, which required a revision of their dose.
Caution should be exercised when using nonsteroidal anti-inflammatory drugs less than 24 hours before the use or after the end of therapy with Methotrexate, as its level in the blood (and, consequently, toxicity) may increase. It is also possible to increase the nephrotoxicity of cyclosporine.
There are single reports of the occurrence of seizures in patients who have taken both nonsteroidal anti-inflammatory drugs and quinolone antibacterial drugs.