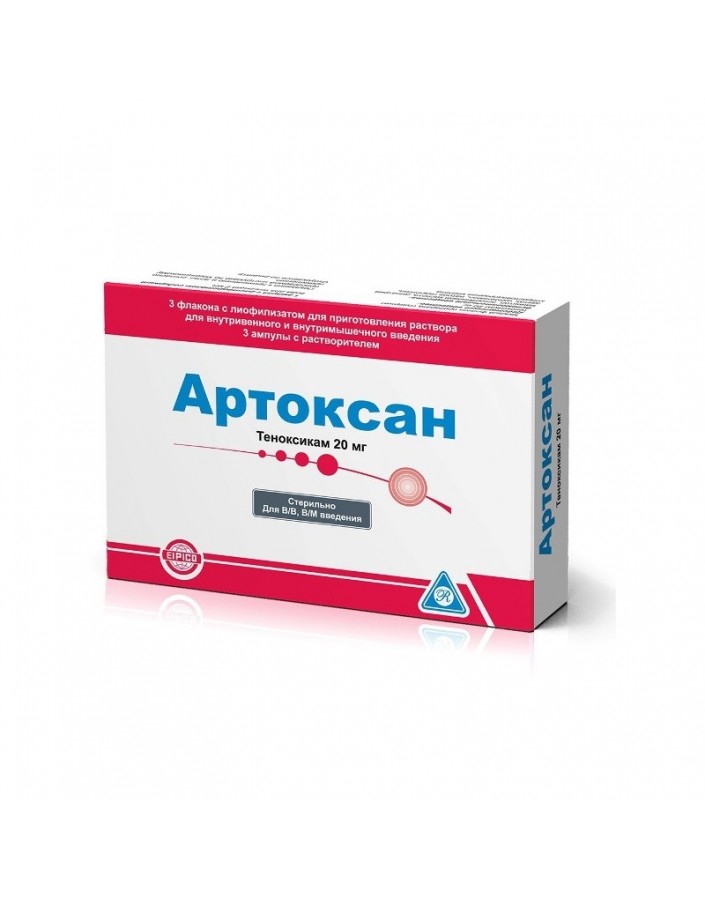 lyophilisate for preparation of solution for intravenous and intramuscular administration.

Each bottle of the drug contains:

Each ampule of solvent contains: water for injection - 2 ml.

Tenoxia, which is a thienothiazine oxycam derivative, is a nonsteroidal anti-inflammatory drug (NSAID). In addition to anti-inflammatory, analgesic and antipyretic effects, the drug also inhibits platelet aggregation. The basis of the mechanism of action is the inhibition of the activity of isoenzymes of cyclooxygenase-1 and cyclooxygenase-2, as a result of which the synthesis of prostaglandins in the focus of inflammation is reduced, as well as in other tissues of the body.In addition, tenoxicam reduces the accumulation of leukocytes in the focus of inflammation, reduces the activity of proteoglycanase and collagenase in human cartilage.

Anti-inflammatory effect develops by the end of the first week of therapy.

Absorption is fast and complete. Bioavailability is 100%.

The maximum concentration in a blood plasma is noted in 2 hours. The distinctive ability of tenoxicam is a long duration of action and a long half-life of 72 hours. The drug is 99% bound to plasma proteins. Tenoxam well penetrates the synovial fluid. Easily penetrates histohematogenous barriers.

Metabolized in the liver by hydroxylation to form 5-hydroxypyridyl.

- hypersensitivity to the active substance or auxiliary components of the drug.There is a possibility of cross-sensitivity to Acetylsalicylic acid, Ibuprofen and other NSAIDs;

- erosive and ulcerative lesions of the stomach and duodenum in the acute stage;

- Gastrointestinal bleeding (including a history);

- complete or incomplete combination of asthma, recurrent nasal polyposis and paranasal sinuses and intolerance to acetylsalicylic acid (ASA) or other NSAIDs (including a history of);

- The established diagnosis of diseases of the blood coagulation system;

The use of the drug during pregnancy and during breastfeeding is contraindicated.

For intramuscular or intravenous administration.

Intramuscular or intravenous administration is used for short-term (1-2 days) treatment at a dose of 20 mg 1 time per day. If necessary, further therapy is transferred to the oral dosage forms of tenoxicam.

The solution for injection is prepared immediately before use by dissolving the contents of the vial with the attached solvent. After preparation, the needle is replaced. Intramuscular injections do deep.The duration of intravenous administration should not be less than 15 seconds.

Violations of the urinary system: Often - an increase in the content of urea nitrogen and creatinine in the blood.

On the background of treatment, mental disorders and metabolic disorders can be observed.

Tenoksikam has a high degree of binding to albumin and can, like all NSAIDs, enhance the anticoagulant effect of Warfarin and other anticoagulants. It is recommended to monitor blood parameters when used together with anticoagulants and hypoglycemic preparations for oral administration, especially in the initial stages of Artok-San.

No possible interaction with Digoxin was noted.

As with the use of other NSAIDs, it is recommended to use the drug along with cyclosporine with caution due to the increased risk of nephrotoxicity.

Combined use with quinolones may increase the risk of seizures.

Salicylates can displace tenoxicam from association with albumin and, accordingly, increase clearance and distribution of the drug.It is necessary to avoid the simultaneous use of salicylates or two or more NSAIDs (increased risk of complications from the gastrointestinal tract).

There is evidence that NSAIDs reduce the excretion of lithium. In this regard, patients receiving therapy with lithium, should often control the concentration of lithium in the blood.

NSAIDs can cause sodium, potassium and fluid retention in the body, causing the action of natriuretic diuretics. This must be remembered when used together with such diuretics in patients with CHF and arterial hypertension.

With caution is recommended to use NSAIDs with Methotrexate, NSAIDs reduce the excretion of methotrexate and may increase its toxicity.

NSAIDs should not be used within 8-12 hours after applying mifepristone, as may reduce its effect.

It is necessary to take into account the increased risk of gastrointestinal bleeding when used together with corticosteroids.

Combined use with antiplatelet agents and selective serotonin reuptake inhibitors increases the risk of gastrointestinal bleeding.

Cardiac glycosides when taken in conjunction with NSAIDs can enhance heart failure, reduce the glomerular filtration rate and increase the plasma level of cardiac glycosides.

The risk of nephrotoxicity increases with the combined use of NSAIDs with tacrolimus.

The risk of hematologic toxicity increases with the use of NSAIDs with zidovudine.

If it is necessary to determine the 17-ketosteroids, the drug should be discontinued 48 hours before the study.

There may be an increase in bleeding time, which should be considered during surgical interventions.

It is necessary to consider the possibility of sodium and water retention in the body when prescribing with diuretics in patients with arterial hypertension and heart failure.