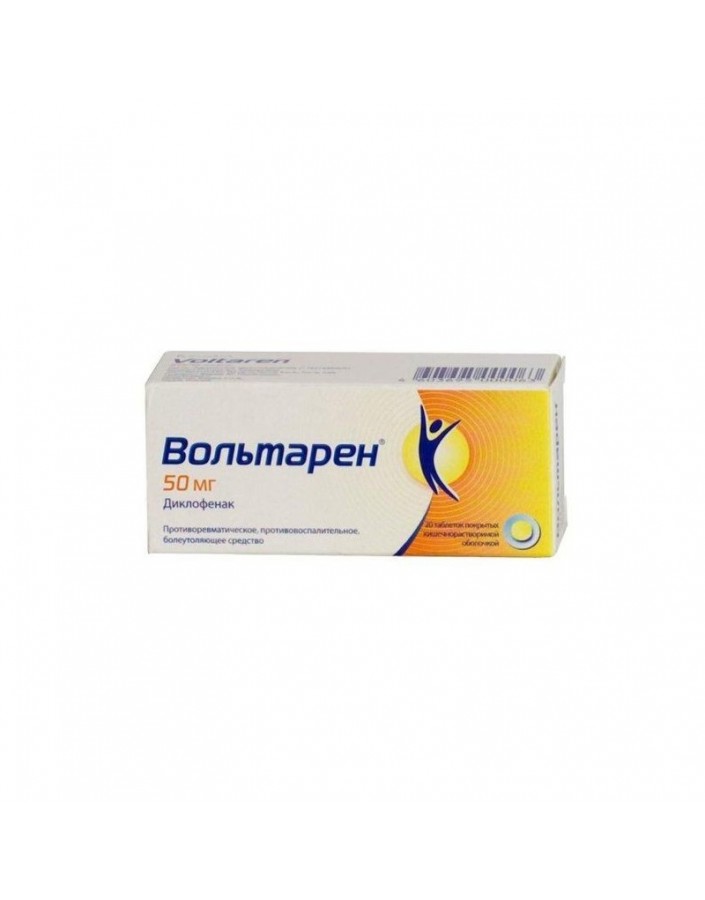 NSAIDs. It has a pronounced analgesic, anti-inflammatory and antipyretic effect.
The main mechanism of action of diclofenac, established in the experimental conditions, is the inhibition of the biosynthesis of prostaglandins. Prostaglandins play an important role in the genesis of inflammation, pain and fever.
In vitro, diclofenac sodium at concentrations equivalent to those achieved in the treatment of patients does not inhibit the biosynthesis of cartilage proteoglycans.
In rheumatic diseases, anti-inflammatory and analgesic properties of Voltaren provide a clinical effect characterized by a significant decrease in the severity of such manifestations of diseases as pain at rest and on movement, morning stiffness and swelling of the joints, as well as an improvement in functional status.
In post-traumatic and postoperative inflammatory events, Voltaren quickly relieves pain (arising both at rest and when moving), reduces inflammatory swelling and swelling of a postoperative wound.
When using Voltaren in pills and suppositories, a marked analgesic effect of the drug was noted with moderate and severe pain of non-rheumatic origin. It was also found that Voltaren is able to reduce pain and reduce blood loss in primary dysmenorrhea.
In addition, Voltaren eases migraine attacks (when used in suppositories).

- inflammatory and degenerative diseases of the musculoskeletal system: rheumatoid arthritis, juvenile rheumatoid arthritis, ankylosing spondylitis, osteoarthritis, spondyloarthritis, osteoarthritis;
- diseases of the spine, accompanied by pain;
- rheumatic diseases of extra-articular soft tissues;
- acute attack of gout (only for enteric-coated tablets);
- post-traumatic and postoperative pain syndromes, accompanied by inflammation and swelling;
- gynecological diseases accompanied by pain and inflammation (for example, primary algodimenorrhea, adnexitis);
- as an additional remedy for severe infectious and inflammatory diseases of the ear, nose and throat, occurring with severe pain, for example, pharyngitis, tonsillitis, otitis media (except for retard tablets). The main treatment of the disease is carried out in accordance with generally accepted principles, incl. with the use of etiotropic therapy. Isolated fever is not an indication for the use of the drug;
- migraine attacks (only for suppositories).

- a stomach or intestinal ulcer;
- Anamnestic information about attacks of asthma, urticaria, acute rhinitis associated with the use of Acetylsalicylic acid or other NSAIDs, as well as any drugs that suppress the production of prostaglandins;
- proctitis (only for suppositories);
- violations of blood formation;
- children's age up to 14 years;
- Hypersensitivity to diclofenac and any other ingredients of the drug.
The drug is not recommended for use in the III trimester of pregnancy / possible suppression of uterine contractility and premature closure of the arterial duct in the fetus /).

Injection
The drug is administered intramuscularly by deep injection into the gluteal region. Do not use injections Voltaren more than 2 days in a row. If necessary, treatment can be continued with Voltaren pills or rectal suppositories.
When conducting intramuscular injection in order to avoid damage to the nerves or other tissues at the injection site, it is recommended to adhere to the following rules.
The drug should be administered deep intramuscularly in the upper outer quadrant of the gluteal region. The dose is usually 75 mg (contents of 1 ampoule) 1 time per day. In severe cases (for example, with colic) as an exception, 2 injections of 75 mg can be given, with an interval of several hours (the second injection should be carried out in the opposite gluteal region). Alternatively, one injection of the drug per day (75 mg) can be combined with taking other Voltaren dosage forms (tablets, rectal suppositories), with a maximum daily dose of 150 mg.

VOLTAREN ACT
For adults and adolescents over 14 years old The initial dose is 2 pills followed by 1-2 pills every 4-6 hours as needed.
The maximum daily dose is 6 pills (75 mg).
Tablets should be taken whole, without chewing and drinking water. To achieve the maximum therapeutic effect of the drug should be taken before meals.
Without a prescription, the duration of Voltaren Akti is 3 days for fever, and 5 days for pain syndrome.

VOLTAREN EMULGEL
The amount of drug used depends on the size of the painful area. For example, 2-4 g of Voltaren Emulgel (which is comparable in volume, respectively, with the size of a cherry or walnut) is sufficient for application to an area of ​​400-800 cm2. The drug is applied to the skin 3-4 times / day and lightly rubbed.
After application of the drug, the hands should be washed, unless this area is treated.
The duration of treatment depends on the indications and the effectiveness of therapy.Indications for continuation of treatment are recommended to be reviewed after 2 weeks.

Voltaren use during pregnancy is possible only in cases where the expected benefit to the mother outweighs the potential risk to the fetus. The drug is prescribed in the minimum effective dose.As in the case of the use of other prostaglandin synthetase inhibitors, these recommendations are especially important in the third trimester of pregnancy (suppression of uterine contractility and premature closure of the arterial duct in the fetus are possible).
When Voltarena is taken orally at a dose of 50 mg every 8 hours, diclofenac passes into breast milk, but in such a small amount that there is no reason to expect any undesirable effects in a breastfed baby.
If necessary, the appointment of Voltaren in lactation should decide on the termination of breastfeeding.

During the application of Voltaren, careful medical supervision of those patients who have complaints pointing to gastrointestinal diseases is necessary; having a history of ulcerative lesions of the stomach or intestines; suffering from ulcerative colitis or Crohn's disease, as well as having impaired liver function.
During the use of Voltaren, as well as other NSAIDs, the level of one or more liver enzymes may increase. Therefore, during prolonged therapy with Voltaren, monitoring of liver function is shown as a precautionary measure. If abnormalities in the functional parameters of the liver persist or worsen, or if clinical manifestations of liver disease or other symptoms occur (for example, eosinophilia, rash, etc.), Voltaren should be abolished.It should be borne in mind that hepatitis against the background of the use of Voltaren can occur without prodromal phenomena.
Caution is needed when Voltaren is prescribed to patients with hepatic porphyria, since The drug may provoke attacks of porphyria.
Since prostaglandins play an important role in maintaining renal blood flow, special care is required when treating patients with impaired heart or kidney function, patients receiving diuretics, as well as patients who have a significant decrease in circulating blood plasma of any etiology, for example, before and after massive surgical interventions. In these cases, during the use of Voltaren, monitoring of renal function is recommended as a precautionary measure. Discontinuation of the drug usually leads to the restoration of renal function to its original level.
Caution must be exercised when applying Voltaren in elderly patients. This is especially true for weakened or low-weight older people; they are recommended to prescribe the drug in the minimum effective dose.
Against the background of Voltaren's use, gastrointestinal bleeding may occur (for the first time or again) or develop ulceration / perforation of the gastrointestinal tract, accompanied by or not accompanied by precursor symptoms. More serious consequences of these complications may occur in elderly patients.In those rare cases where these complications develop in patients receiving Voltaren, the drug should be discontinued.
The first use of Voltaren, as well as other NSAIDs, in rare cases may develop allergic reactions, including anaphylactic and anaphylactoid reactions.
Voltaren, due to its pharmacodynamic properties, can mask the manifestations of infectious diseases.
Voltaren, as well as other NSAIDs, can temporarily inhibit platelet aggregation. Therefore, in patients with impaired hemostasis, careful monitoring of relevant laboratory parameters is necessary.
With long-term use of Voltaren, like other NSAIDs, systematic monitoring of the pattern of peripheral blood is shown.
Influence on ability to drive motor transport and control mechanisms
Patients who develop dizziness or other disorders of the central nervous system, including visual impairment during the use of Voltaren, should not drive a car or operate machinery during the period of use of the drug.

The typical clinical picture, peculiar to an overdose of Voltaren, does not exist.
Treatment of acute poisoning with NSAIDs includes supportive and symptomatic therapy. Supporting and symptomatic treatment is indicated for such complications as lowering blood pressure, renal failure, convulsions, gastrointestinal disturbances and respiratory depression.It is unlikely that forced diuresis, hemodialysis or hemoperfusion will be useful for removing NSAIDs, because The active substances of these drugs are largely associated with plasma proteins and are extensively metabolized.
In the event of an overdose while taking the drug inside, in order to quickly prevent the absorption of diclofenac, it is necessary to wash the stomach and appoint activated charcoal.

Voltaren can increase the concentration of lithium and Digoxin in the plasma while using it with these drugs.
Voltaren, like other NSAIDs, can reduce the effect of diuretics. The simultaneous use of Voltaren with potassium-sparing diuretics can lead to an increase in the level of potassium in the blood (in the case of such a combination of drugs, this indicator should often be monitored).
Simultaneous use of Voltaren with other NSAIDs may increase the risk of side effects.
Although clinical studies have not established the effect of Voltaren on the effect of anticoagulants, there are some reports of an increased risk of bleeding in cases of their joint use. Careful observation of patients receiving these drugs at the same time is recommended.
Voltaren can be prescribed together with oral hypoglycemic drugs and at the same time the effectiveness of the latter does not change.However, there are individual reports of the development in such cases of both hypoglycemia and hyperglycemia, which necessitated a change in the dose of hypoglycemic drugs during the use of Voltaren.
Caution should be exercised when using NSAIDs less than 24 hours before the start of application or after the end of therapy with Methotrexate, because its blood level (and therefore toxicity) may increase.
The effect of NSAIDs on kidney prostaglandin activity may increase cyclosporine nephrotoxicity.
There are isolated reports of seizures in patients who took both NSAIDs and quinolone antibacterial drugs.