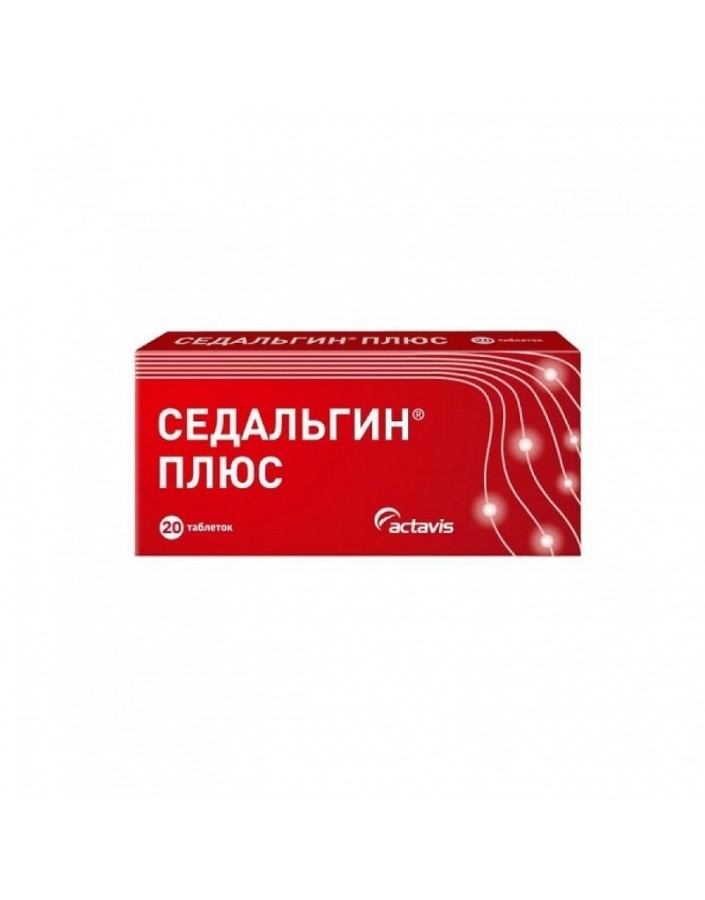 round flat pills from white to almost white color, with a double-sided facet and a risky one side.

Pharmacodynamics
The combined drug has analgesic, antipyretic and anti-inflammatory effects.

Metamizole Sodium is a derivative of pyrazolone and has analgesic, antipyretic and weak anti-inflammatory action, the mechanism of which is associated with the inhibition of prostaglandin synthesis by inhibiting cyclooxygenase.

Thiamine (vitamin B,) is involved in metabolism, and contributes to the improvement of neuro-reflex
conductivity.

Dosage and administration
Inside after eating 1 pill 2-3 times in the morning. The maximum single dose for adults and adolescents from 16 years old - 2 tablets, the maximum daily dose - 6 pills not more than 1-2 days.
Children aged 12 to 16 years old - in half or one pill 2-3 times a day, the maximum daily dose is 4 tablets.
The duration of treatment is no more than 5 days when prescribed as an anesthetic and 3 days as an antipyretic.
If the symptoms of the disease continue or worsen, you should consult a doctor. Increasing the daily dose of the drug or the duration of treatment is possible only under medical supervision.

On the part of the gastrointestinal tract: loss of appetite, nausea, vomiting, cholestasis, jaundice.
From the side of blood-forming organs: thrombocytopenia, leukopenia, agranulocytosis, hemolytic
anemia, purpura.
On the part of the central nervous system: insomnia, dizziness, irritability.
Since the cardiovascular system: feeling of heartbeat, heart rhythm disturbances. Allergic reactions: skin rash, itching, redness, angioedema, anaphylactic shock; bronchospasm.
All side effects should be reported to your doctor.

The simultaneous use of metamizole sodium (aspirin) with other non-narcotic analgesics, nonsteroidal anti-inflammatory drugs can lead to mutual enhancement of toxic effects.
Tricyclic antidepressants, oral contraceptives, Allopurinol violate the metabolism of metamizole sodium in the liver and increase its toxicity.
Barbiturates, phenylbutazone (butadiene) and other inducers of liver microsomal enzymes weaken the effect of metamizole sodium. The simultaneous use of metamizole sodium with cyclosporine reduces the concentration of the latter in the blood.
Sedatives and tranquilizers enhance the analgesic effect of metamizole sodium. special instructions
Excessive consumption of caffeine-containing products (tea, coffee) during treatment may cause symptoms of overdose.
With caution and under medical supervision used in patients with impaired liver or kidney function.
The simultaneous use of the drug with alcohol-containing beverages is not recommended.
Patients with atopic asthma, hay fever, have an increased risk of developing
hypersensitivity reactions.
Influence on ability to drive vehicles and work with mechanisms
Care must be taken when driving and working with mechanisms that require increased concentration and psychomotor speed, since dizziness may develop when taking the drug.

Pills. 10 pills in a blister of three-layer PVC / PVDH / PVC film or two-layer PVC / PVD film and aluminum foil.
1 or 2 blisters along with instructions for use in a carton box.

In a dry, dark place, at a temperature not higher than 25 ° C. Keep out of the reach of children!