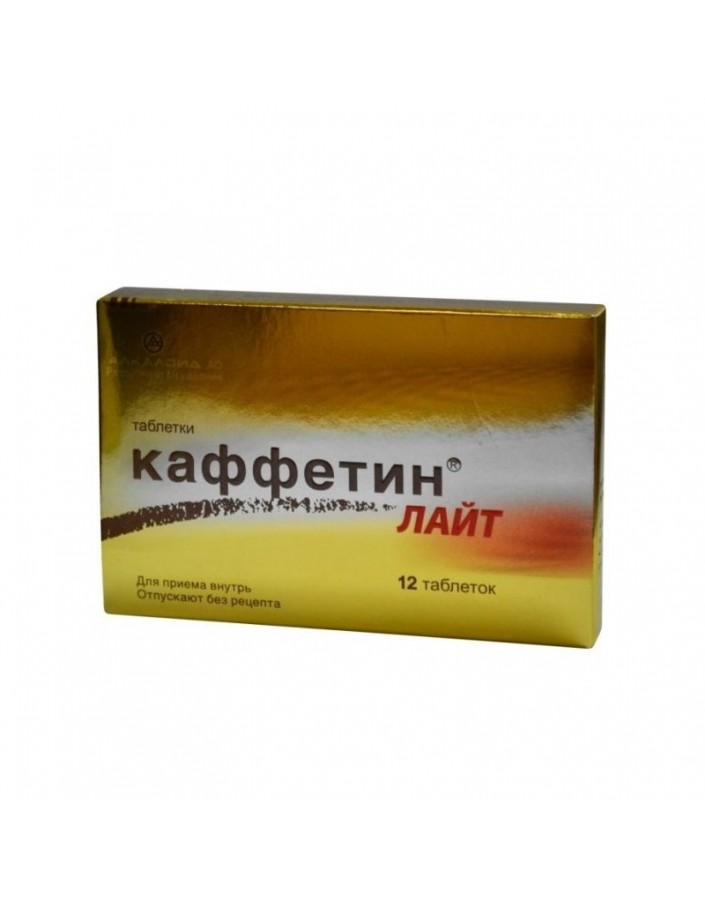 CompositionCaffetine light tablets. Round flat pills of white color with a facet, with the designation of the manufacturer's mark "5" on one side and a risk on the other.1 tab.:- Paracetamol 250 mg- propifenazone 210 mg- caffeine 50 mgexcipients: Magnesium stearate 13.5 mg; sodium lauryl sulfate 1.5 mg; sodium starch glycolate (type A) 14.5 mg; silicon dioxide, colloidal anhydrous 2.5 mg; Povidone 12.5 mg; Calcium phosphate dihydrate 21.1 mg; MCC 28.5 mg; croscarmellose sodium 9.6 mg; glyceryl dibegenat 6.3 mgFarmgroup:Analgesic.Pharmaceutical action:Cuffetin® Light is a combination drug of analgesic action.Paracetamol and propifenazone have analgesic and antipyretic effects. The mechanism of action is associated with inhibition of the synthesis of PG. The presence of caffeine in the combined analgesic means helps to increase the absorption of components.The drug provides a satisfactory analgesic effect, and the use of small amounts of its constituent components reduces the risk of side effects.Pharmacokinetics:The pharmacokinetic characteristics of the combined drugs are not significant, since drugs are not intended for the treatment of chronic diseases and therefore are used as needed or in the form of short-term courses.All active ingredients of Caffetin® Light have a similar pharmacokinetic profile that justifies the rationality of the analgesic combination. They are absorbed very quickly and their plasma Cmax is reached 30–60 minutes after administration.Metabolized in the liver and excreted in the urine.During paracetamol biotransformation, a small amount of the toxic metabolite N-acetil-p-benzo-quinoneimine is created, which can show abnormalities in the liver.Indications:Pain syndrome of moderate severity of various origins:- headache and toothache;- migraine;- neuralgia;- myalgia;- posttraumatic pain;- arthralgia;- Algomenorrhea;- fever with influenza infections.Category of action on the fetus:Cuffetin® light is contraindicated for use during pregnancy and lactation.Contraindications:- increased individual sensitivity to the components of the drug;- liver and / or renal failure;- deficiency of glucose-6-phosphate dehydrogenase;- leukopenia;- violation of blood formation;- increased excitability;- insomnia;- Angina against the background of coronarosclerosis;- pregnancy and lactation;- children's age (up to 7 years).With care: elderly, children's age, glaucoma.Dosing:InsideAdults - on 1 tab. 3-4 times a day. With severe pain, it is recommended reception 2 table. right away The maximum daily dose - 6 tablets.Children older than 7 years appoint 1 / 4-1 / 2 table. 1–4 times a day.The duration of the drug is not more than 5 days. Increasing the daily dose of the drug or the duration of treatment is possible only after consulting a doctor.Side effect:Leukopenia, agranulocytosis, nausea, gastralgia, vomiting, increased activity of hepatic transaminases, increased excitability (especially in children), allergic reactions (skin rash, angioedema, pruritus, urticaria).Overdose:Symptoms: nausea, vomiting, tinnitus, stomach pain, sweating, pallor of the skin, tachycardia. If you suspect a poisoning should immediately seek medical help.Treatment: the victim should do a gastric lavage and administer adsorbents (activated carbon).Interaction:The combination of Caffetine Light with barbiturates, antiepileptic drugs, zidovudine, rifampicin and alcohol-containing beverages should be avoided (the risk of hepatotoxic effect increases).Under the influence of paracetamol, the time of chloramphenicol excretion is increased 5 times. Metoclopramide accelerates the absorption of paracetamol. With repeated use of paracetamol can enhance the effect of anticoagulants (dicoumarin derivatives). Caffeine accelerates the absorption of ergotamine.Special instructions:With prolonged use of the drug Caffetin Light, control of peripheral blood and the functional state of the liver is necessary. During treatment, you should abandon the use of alcohol-containing beverages (increased risk of gastrointestinal bleeding).Excessive consumption of caffeine-containing products (coffee, tea) while taking the drug may cause symptoms of overdose.Taking the drug may make it difficult to establish a diagnosis of acute abdominal pain.In patients with asthma, pollinosis, there is an increased risk of hypersensitivity reactions.Influence on ability to steer vehicles, mechanisms. Does not affect.