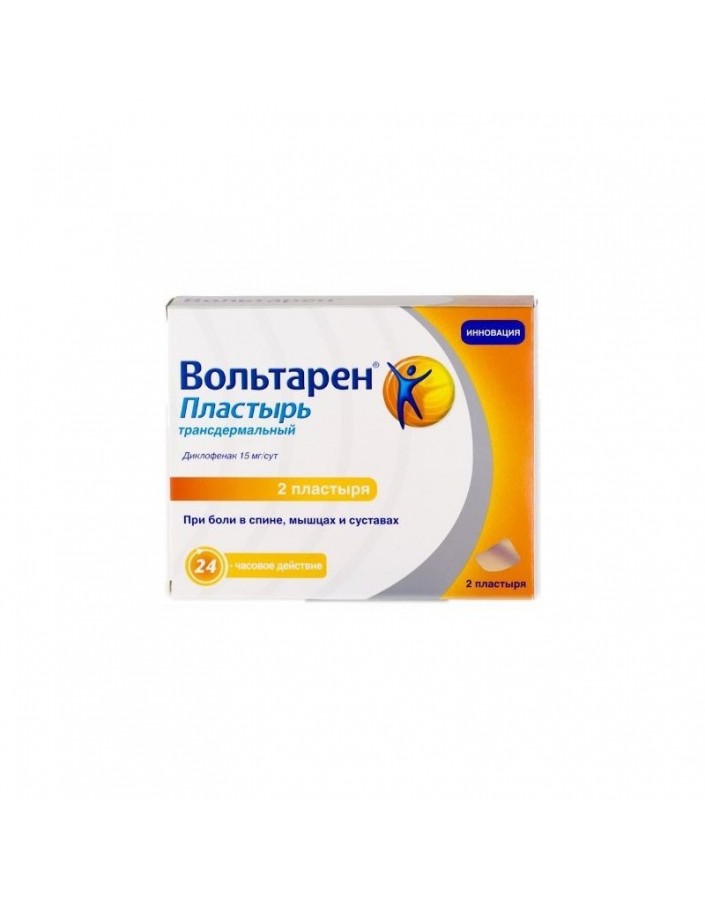 Description: Rectangular plasters with rounded edges consisting of a beige polyester backing with a uniformly applied adhesive layer from colorless to pale yellow with a faint odor. The adhesive surface is covered with a transparent protective film of polyethylene with two transverse incisions, one of which has a wavy line. A pattern showing how to remove the film from the surface of the plaster is applied to the transparent protective film. The size of the patch is 70 x 100 mm.

Voltaren in the form of a transdermal patch is a base coated with an adhesive layer containing diclofenac, which has pronounced analgesic and anti-inflammatory properties. The basis of the mechanisms of action of diclofenac is inhibition of prostaglandin synthesis.

Voltaren's plaster provides anti-inflammatory and analgesic action at the site of application, eliminating pain and reducing the swelling associated with the inflammatory process.

Back pain in inflammatory and degenerative diseases of the spine (radiculitis, osteoarthritis, lumbago, sciatica).

Pain in the joints (joints of the fingers, knee, etc.) in rheumatoid arthritis, osteoarthritis.

Inflammation and swelling of soft tissues and joints due to injuries and rheumatic diseases (tenosynovitis, bursitis, periarticular tissue lesions).

Hypersensitivity to diclofenac or other components of the drug; a tendency to the occurrence of asthma attacks, skin rashes or acute rhinitis with the use of Acetylsalicylic acid or other NSAIDs; pregnancy (III trimester); breastfeeding: children (up to 15 years); violation of the integrity of the skin in the place of alleged sticking the patch.

The use of the drug in pregnant women has not been studied,
therefore, Voltaren Patch should not be used during pregnancy, especially in the third trimester, because of the possibility of reducing the tone of the uterus and / or premature closure of the fetal arterial duct. Animal studies have not revealed any direct or indirect negative effects on pregnancy, childbirth, fetal and postembryonic development. There is no data on the penetration of the drug into breast milk, so the Voltaren plaster is not recommended for use during breastfeeding.

Externally in the form of applications on the skin.

Voltaren plaster stick on the skin over
painful area for 24 hours. During the day
only 1 patch is allowed.

In the treatment of soft tissue damage plaster
Voltaren® is used no more
14 days, and in the treatment of diseases of the muscles and joints - not
more than 21 days if there are no special recommendations of the doctor.

If there is no improvement after 7 days and
with a deterioration of health, it is necessary
consult a doctor.

The use of Voltaren8 plaster in children under the age of 15 years is not recommended.

Extremely low systemic absorption of active ingredients and the dosage form of the drug for external use makes overdose almost impossible.

Interaction with other drugs
Voltaren® plaster may enhance the effect of drugs that cause photosensitization. Clinically significant interactions with other drugs are not described.
Influence on ability of driving of motor transport and control of mechanisms
The drug does not affect the speed of psychomotor reactions when driving and working with mechanisms.

special instructions
The Voltaren Patch should be applied only to intact skin, avoiding contact with open wounds. Do not allow contact with the eyes and mucous membranes.

When applying the Voltaren patch for too long a time, the possibility of developing systemic adverse reactions cannot be excluded.

With the additional use of other dosage forms of diclofenac, its quantitative content in the patch should be considered in order not to exceed the maximum daily dose of diclofenac (150 mg / day).

Store at a temperature not higher than 25 "C in the original packaging.
Keep out of the reach of children.