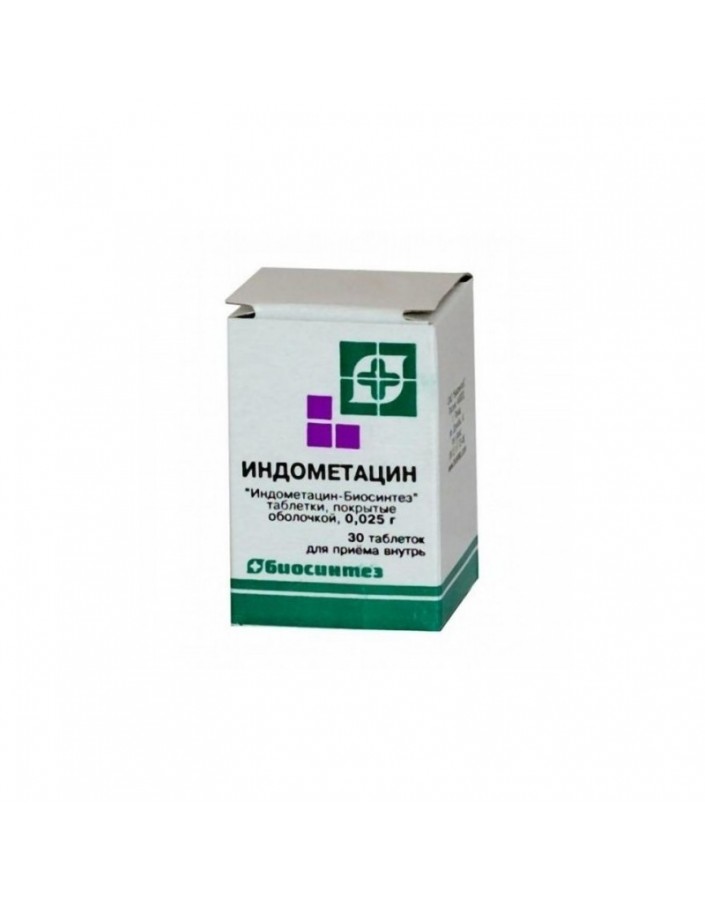 pharmachologic effect
Indomethacin has anti-inflammatory, analgesic and antipyretic, as well as some antiplatelet effects. Suppresses the activity of anti-inflammatory factors, reduces platelet aggregation. Inhibiting cyclooxygenase 1 and 2, violates the metabolism of arachidonic acid, reduces the number of prostaglandins (Pg) in the inflammation and in healthy tissues, suppresses the exudative and proliferative phases of inflammation.
When applied externally, it causes weakening or disappearance of pain syndrome of a rheumatic and non-rheumatic nature (including with pains in the joints at rest and during movement, reduces morning stiffness and swelling of the joints, contributes to an increase in the volume of movements; during inflammatory processes that occur after surgery and injuries, quickly relieves both spontaneous pain and pain when moving, reduces inflammatory swelling at the wound site).

Pharmacokinetics
When ingestion bioavailability is 98%, with rectal - 85%. Intensively binds to plasma proteins. T1/2 - 4–9 h. Metabolized mainly in the liver. Mainly excreted in the urine (60-75%), 30% - through the gastrointestinal tract. Not removed during dialysis. Penetrates into breast milk.
When applied topically, indomethacin is practically not absorbed into the systemic circulation.

Contraindications
- Individual hypersensitivity to indomethacin, Aspirin or another NSAID (in the history of bronchospasm, urticaria or rhinitis, caused by the administration of Acetylsalicylic acid or other NSAIDs);
- peptic ulcer of the stomach and / or intestines in the acute phase;
- pregnancy and lactation;
- children's age (up to 14 years).
- violations of blood formation;
- severe impaired function of the liver and / or kidneys;
- severe forms of chronic heart failure, arterial hypertension, pancreatitis;
- for rectal use: proctitis, recent rectal bleeding.

Ointment rub a thin layer into the skin of painful areas of the body 2-3 times a day. The total amount per day should not exceed 15 cm ointment for adults and 7.5 cm for children over 14 years old.

For local use in ophthalmology, the dose frequency and duration of use are determined individually.

Pills: Inside, during or after a meal, drinking milk, adults - in the initial dose of 25 mg 2-3 times a day. With insufficient severity of the clinical effect, the dose is increased to 50 mg 3 times a day. The maximum daily dose is 200 mg. When effect is achieved, treatment is continued for 4 weeks in the same or reduced dose. With prolonged use, the maximum daily dose is 75 mg.

special instructions
With caution used in elderly patients, as well as in diseases of the liver, kidney, gastrointestinal tract in history, with dyspeptic symptoms at the time of application, hypertension, heart failure, immediately after serious surgical interventions, with Parkinson's disease, epilepsy.
When instructions in the history of allergic reactions to NSAIDs are used only in emergency cases.
During the period of treatment requires systematic monitoring of liver and kidney function, peripheral blood picture.
Not recommended for simultaneous use with acetylsalicylic acid and other NSAIDs.
Indomethacin should not be used simultaneously with diflunisal.
With simultaneous use of indomethacin with lithium preparations, one should keep in mind the possibility of the onset of symptoms of the toxic effect of lithium.
When applied topically should not be applied to the wound surface of the skin, as well as avoid contact with eyes or mucous membranes.
Influence on ability to drive motor transport and control mechanisms
During the period of treatment, you should refrain from potentially hazardous activities associated with the need for concentration and increased speed of psychomotor reactions.

With the simultaneous use of indomethacin and diflunisal there is a risk of severe bleeding from the gastrointestinal tract.

With simultaneous use of probenecid may increase the concentration of indomethacin in the blood plasma.

Indomethacin can reduce the tubular secretion of Methotrexate, which leads to an increase in its toxicity.

At simultaneous use with NPVS toxicity of cyclosporine increases.

Indomethacin in a dose of 50 mg 3 times / day increases the concentration of lithium in the blood plasma and reduces the clearance of lithium from the body in patients with mental illness.