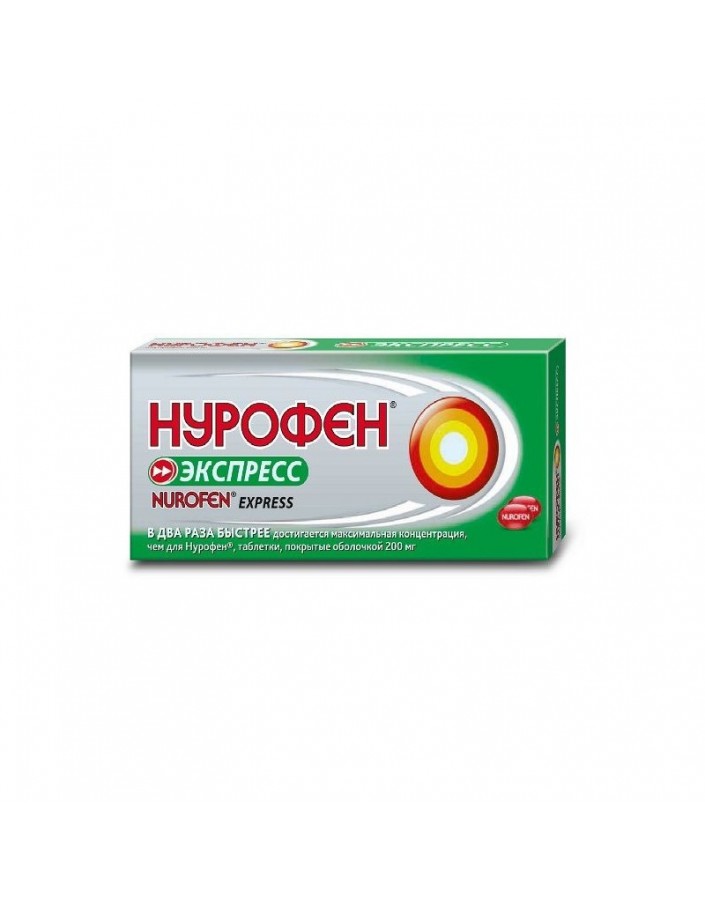 - Fever with flu and ARVI.

To achieve a rapid therapeutic effect, the dose can be increased to 400 mg (2 capsules) 3 times / day.

Do not take more than 6 caps / day. Maximum Daily Dose for adults is 1.2 g. The maximum daily dose for children and adolescents aged 12 to 17 years is 1 year

Capsules should be washed down with water.

The patient should be warned that if the symptoms of the disease persist when taking the drug for 2-3 days, it is necessary to stop treatment and consult a doctor.

Gastrointestinal: NPVS-gastropathy (abdominal pain, nausea, vomiting, heartburn, loss of appetite, diarrhea, flatulence, constipation; possibly increased activity of hepatic transaminases; rarely - erosive and ulcerative lesions of the gastrointestinal mucosa, which in some cases are complicated by perforation and bleeding); irritation or dryness of the oral mucosa, pain in the mouth, ulceration of the mucous membrane of the gums, aphthous stomatitis, pancreatitis, hepatitis.

Hemic and lymphatic: anemia (including hemolytic and aplastic), thrombocytopenia, thrombocytopenic purpura, agranulocytosis, leukopenia; possibly an increase in bleeding time, a decrease in hematocrit or hemoglobin.

Other: increased sweating; may decrease the concentration of glucose in the blood.

When using the drug for 2-3 days, side effects are very rare.

- erosive and ulcerative lesions of the gastrointestinal tract in the acute phase (including gastric ulcer and duodenal ulcer, Crohn's disease, UC);

WITH caution prescribe the drug to elderly patients, patients with heart failure, arterial hypertension, ischemic heart disease, cerebrovascular diseases, dyslipidemia / hyperlipidemia, diabetes, peripheral artery disease, smokers, with frequent use of alcohol,with cirrhosis of the liver with portal hypertension, with CC <60 ml / min, hepatic and / or renal failure, patients with nephrotic syndrome, hyperbilirubinemia, with indications of a history of gastric ulcer and duodenal ulcer, patients with gastritis, enteritis, colitis, the presence of Helicobacter pylori infection, with blood diseases of unknown etiology (leukopenia and anemia), during lactation, with prolonged use of NSAIDs, patients with severe somatic diseases, simultaneously with oral GCS (including zolone), with anticoagulants (including with warfarin), with antiplatelet agents (including with acetylsalicylic acid, clopidogrel), selective serotonin reuptake inhibitors (including with citalopram, Fluoxetine, paroxetine, sertraline ).

Nurofen® UltraCap is contraindicated for use in the third trimester of pregnancy.

The use of the drug in the I and II trimesters of pregnancy and lactation is possible only in the case when the intended benefit to the mother outweighs the potential risk to the fetus or baby.

If necessary, the appointment of the drug during lactation should decide on the termination of breastfeeding.

WITH caution should be prescribed in the presence of concomitant liver diseases.

The drug is contraindicated in severe renal impairment.

WITH caution should be prescribed in the presence of concomitant kidney disease.

Treatment with the drug should be carried out in the minimum effective dose, the shortest possible course.

The patient should be informed that if side effects occur, the drug should be stopped and the doctor should be consulted. During the period of treatment is not recommended to use ethanol.

During long-term treatment, it is necessary to control the picture of peripheral blood and the functional state of the liver and kidneys. When symptoms of gastropathy appear, a careful monitoring is shown, including esophagogastroduodenoscopy, complete blood count (hemoglobin determination), fecal occult blood test.

Patients should refrain from all activities that require increased attention and high-speed psychomotor reactions.

The simultaneous use of Nurofen UltraCap with acetylsalicylic acid and other NSAIDs is not recommended.

With simultaneous use with anticoagulants and thrombolytic drugs (including alteplazy, streptokinase, urokinase) increases the risk of bleeding.

With the combined use of cyclosporine and gold preparations enhance the effect of ibuprofen on the synthesis of prostaglandin in the kidneys, which leads to increased nephrotoxicity. Ibuprofen increases the plasma concentration of cyclosporine and the likelihood of its hepatotoxic effects.

Drugs that block tubular secretion, with simultaneous use, reduce excretion and increase the plasma concentration of ibuprofen.

Inhibitors of microsomal oxidation reduce the risk of the development of the hepatotoxic effect of ibuprofen.

With the combined use of ibuprofen reduces the hypotensive activity of vasodilators, the natriuretic effect of Furosemide and hydrochlorothiazide.

Enhances the side effects of mineralocorticoids, GCS, estrogen, ethanol.

When used together, it enhances the effect of oral hypoglycemic drugs (sulfonylurea derivatives) and insulin .

While taking antacids and Kolestiramin reduce the absorption of ibuprofen.

With the combined use of ibuprofen increases the concentration in the blood of Digoxin, lithium preparations, Methotrexate .

The drug should be stored in a dry place inaccessible to children at a temperature not higher than 25 ° C.