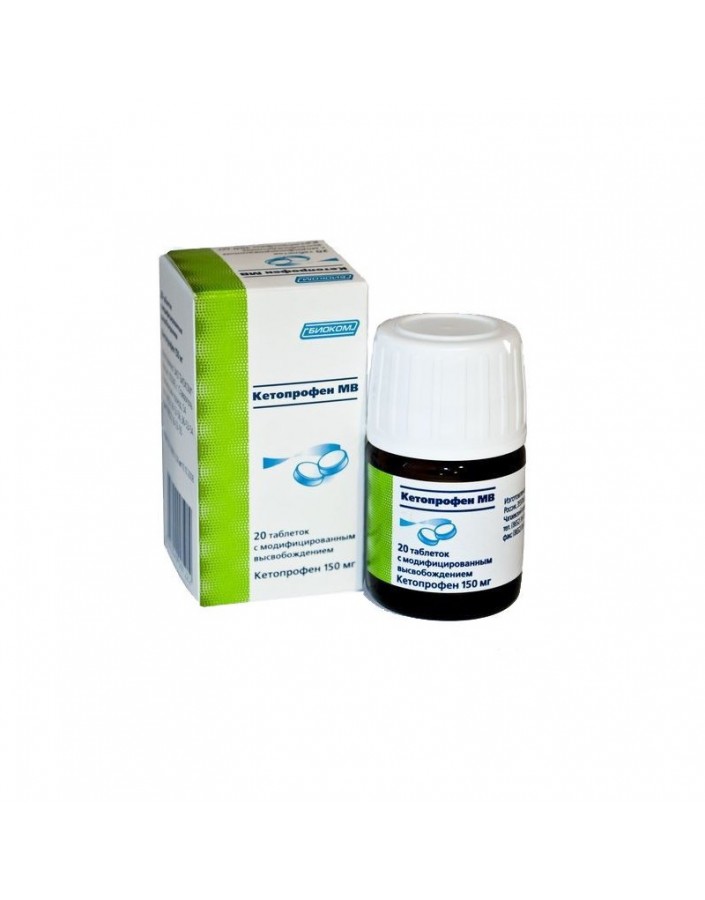 Ketoprofen is a non-steroidal anti-inflammatory drug, has anti-inflammatory, analgesic and antipyretic effects associated with the suppression of the activity of cyclooxygenases 1 and 2, which regulate the synthesis of prostaglandins and bradykinin; stabilizes lysosomal membranes.
Does not adversely affect the condition of the articular cartilage.

Ketoprofena is contraindicated in the third trimester of pregnancy.
In the first and second trimesters of pregnancy, prescribing is possible only if the intended benefit to the mother outweighs the potential risk to the fetus.
In the period of lactation while taking the drug, it is necessary to resolve the issue of stopping breastfeeding.

The drug should be taken orally, during or after a meal, 1 pill (150 mg) 1 time per day. pills should be swallowed whole, without chewing, with a large amount (at least 100 ml) of water or milk.
The minimum effective dose should be used with the shortest possible short course.

Ketoprofen can be taken with milk or taken with antacids to reduce the frequency of gastrointestinal disorders; Antacids and milk do not affect the absorbability of the drug.
During treatment, it is necessary to control the picture of peripheral blood and the functional state of the liver and kidneys, especially in elderly patients.
In case of impaired renal and liver function, a dose reduction and careful observation is necessary.
If necessary, determine the 17-ketosteroids drug should be canceled 48 hours before the study.
The drug may mask the signs of an infectious disease.
Do not use the drug at the same time as other NSAIDs.
During the period of treatment, care must be taken when driving vehicles and engaging in other potentially hazardous activities that require increased concentration and psychomotor reactions.

Ketoprofen may weaken the effect of diuretics and antihypertensive drugs and enhance the effects of oral hypoglycemic and some anticonvulsants (phenytoin).
Joint reception with other NSAIDs, glucocorticosteroids, salicylates, ethanol, corticotropin increases the risk of adverse effects from the gastrointestinal tract.
The simultaneous appointment with anticoagulants, thrombolytics, antiplatelet agents, as well as with cefaperazon, cefamandol, cefotetan and moxalactam increases the risk of bleeding.
At the same time taking nonsteroidal anti-inflammatory drugs with diuretics and ACE inhibitors increases the risk of renal dysfunction.
Increases plasma concentration of cardiac glycosides, slow Calcium channel blockers, lithium preparations, cyclosporine, Methotrexate.
Non-steroidal anti-inflammatory drugs may decrease the effectiveness of mifepristone. NSAID administration should begin no earlier than 8-12 days after the abolition of mifepristone.
Inductors of microsomal oxidation in the liver (phenytoin, ethanol, barbiturates, rifampicin, phenylbutazone, tricyclic antidepressants) increase the production of hydroxylated active metabolites.
Joint appointment with sodium valproate causes a violation of platelet aggregation.
Increases the hypoglycemic effect of insulin and oral hypoglycemic drugs (dose recalculation is required).
Myelotoxic drugs increase the hematotoxicity of the drug.

With ketoprofen overdose, like other nonsteroidal anti-inflammatory drugs, nausea, vomiting, vomiting with blood, abdominal pain, melena, impaired consciousness, respiratory depression, convulsions, impaired renal function and renal failure may occur.
There is no specific antidote.Treatment - symptomatic. The effects of ketoprofen on the gastrointestinal tract can be reduced by using H2 receptor antagonists, proton pump inhibitors and prostaglandins. Shown gastric lavage and the use of Activated carbon.