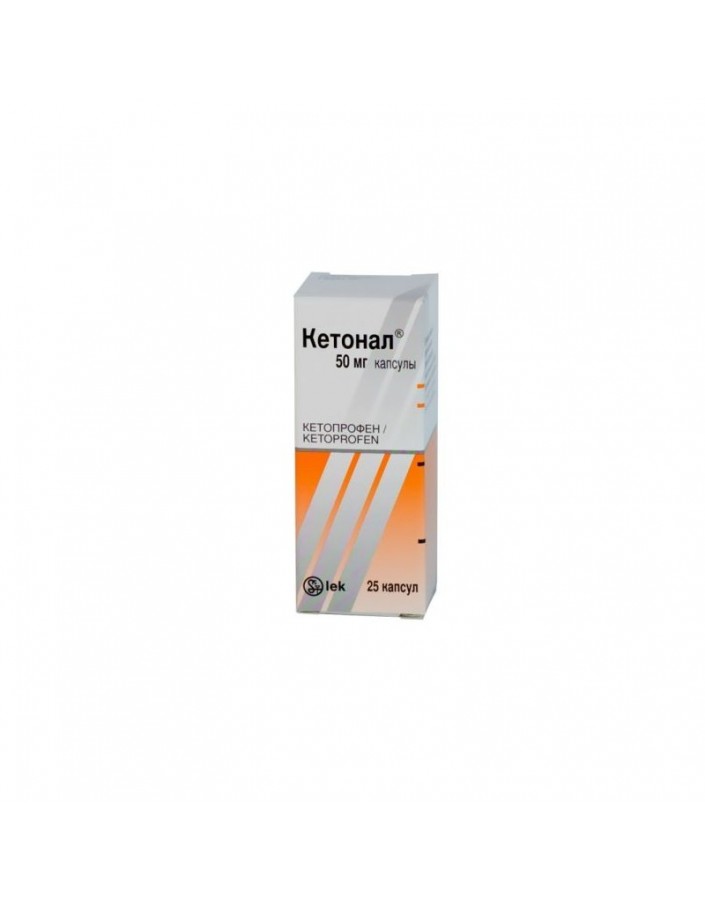 inflammatory and degenerative diseases of the musculoskeletal system:

Oral forms can be combined with the use of rectal suppositories or Ketonal dosage forms for external use (cream, gel).

The maximum daily dose (including the use of various dosage forms) is 200 mg.

From the urinary system: rare - impaired renal function, interstitial nephritis, nephrotic syndrome, hematuria (with long-term use of NSAIDs and diuretics).

- bronchial asthma, rhinitis, urticaria in history, caused by the intake of Acetylsalicylic acid or other NSAIDs;

- peptic ulcer of the stomach and duodenum in the acute phase;

- hemophilia and other bleeding disorders;

- gastrointestinal, cerebrovascular and other bleeding (or suspected bleeding);

- hypersensitivity to Ketoprofen or other components of the drug, as well as salicylates or other NSAIDs.

WITH caution It should be prescribed for a history of peptic ulcer disease, a history of bronchial asthma, clinically significant cardiovascular, cerebrovascular diseases, diseases of the peripheral arteries, dyslipidemias, hepatic failure, hyperbilirubinemia, alcoholic cirrhosis of the liver, renal failure, chronic heart failure, and in hysterism, and if you need to be hardened., dehydration, diabetes, anamnestic data on the development of ulcerative lesions of the gastrointestinal tract, smoking,concomitant therapy with anticoagulants (for example, warfarin), antiplatelet agents (for example, acetylsalicylic acid), oral GCS (for example, prednisolone), selective serotonin reuptake inhibitors (for example, citalopram, sertralin).

The use of ketoprofen in the third trimester of pregnancy is contraindicated. In the first and second trimesters of pregnancy, prescribing is possible only if the intended benefit to the mother outweighs the potential risk to the fetus.

When taking the drug during lactation should decide on the termination of breastfeeding.

Contraindications: children up to 15 years.

With prolonged use of NSAIDs, it is necessary to monitor the state of the blood, as well as the function of the kidneys and liver, especially in elderly patients (over 65).

Ketonal® you can drink milk or take it with antacid drugs in order to reduce the frequency of gastrointestinal disorders (milk and antacids do not affect the absorption of ketoprofen).

With long-term use of NSAIDs, it is necessary to monitor the state of the blood, as well as the function of the liver and kidneys, especially in elderly patients.

Care must be taken and more often to control blood pressure when using ketoprofen for the treatment of patients with hypertension, cardiovascular diseases that lead to fluid retention.

Like other NSAIDs, ketoprofen can mask the symptoms of infectious diseases.

There are no data on the negative effect of Ketonal in recommended doses on the ability to drive a car or work with mechanisms. However, patients who notice non-standard effects while taking the drug Ketonal®Care should be taken when practicing potentially hazardous activities that require increased concentration and psychomotor reactions.

Treatment: gastric lavage, the appointment of activated charcoal, spend symptomatic therapy. The use of histamine H blockers is shown.2-receptors, proton pump inhibitors, prostaglandin inhibitors. There is no specific antidote.

Enhances the effect of some anticonvulsants (for example, phenytoin).

With simultaneous use with other NSAIDs, salicylates, corticosteroids and ethanol increases the risk of Gastrointestinal bleeding.

When used simultaneously with anticoagulants, thrombolytics, antiplatelet agents, the risk of bleeding increases.

The risk of developing impaired renal function is increased when taken simultaneously with diuretics or ACE inhibitors.