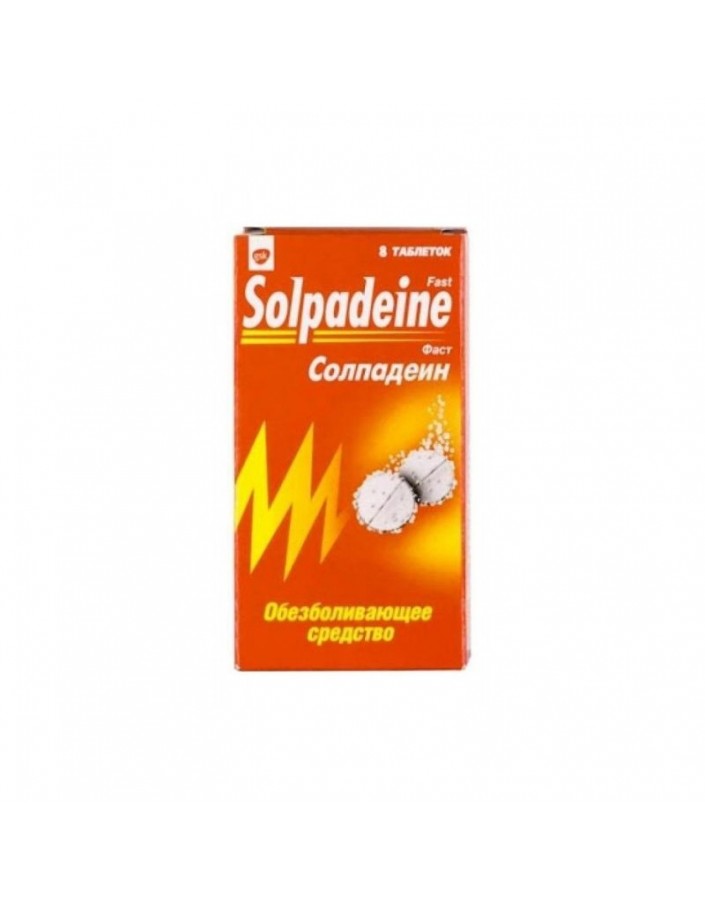 Solpadeine FAST - analgesic antipyretic of the combined composition, contains a combination of two active ingredients: Paracetamol and caffeine. Has antipyretic and analgesic effect.

Paracetamol blocks cyclooxygenase in the central nervous system, affecting the centers of pain and thermoregulation (cellular tissue peroxidases neutralize the effect of paracetamol on COX in inflammatory tissues), which explains the almost complete absence of anti-inflammatory effect. The lack of influence on the synthesis of prostaglandins in peripheral tissues determines the absence of a negative effect on the water-salt metabolism (sodium and water retention) and the gastrointestinal mucosa.

Caffeine stimulates the psychomotor centers of the brain, has analeptic effect, enhances the effect of analgesics, eliminates drowsiness and fatigue, increases physical and mental performance.

- to reduce fever and symptomatic treatment of colds and flu.

- pronounced violations of the liver or kidneys;

- simultaneous reception with other paracetamol-containing drugs;

- increased individual sensitivity to the components of the drug.

The drug should be used with caution in benign hyperbilirubinemia (including Gilbert's syndrome), viral hepatitis, alcoholic liver damage, deficiency of glucose-6-phosphate dehydrogenase, alcoholism, pregnancy, during lactation.

Tablets Solpadeine Fast before ingestion should be dissolved in at least 100 ml (half a cup) of water.

Adults (including the elderly) and children over 12 years old are prescribed 1-2 pills of 3-4, if necessary. The interval between doses of at least 4 hours. The maximum single dose - 2 tablets, the maximum daily dose - 8 tablets.

The drug is not recommended for more than 5 days when prescribed as an anesthetic and more than 3 days as an antipyretic without the appointment and observation of a doctor.

Increasing the daily dose of the drug or the duration of treatment is possible only under medical supervision.

When taken for a long time, the drug enhances the effect of indirect anticoagulants (warfarin and other coumarins), which increases the risk of bleeding.

Enhances the effect of MAO inhibitors.

Under the influence of paracetamol T1 / 2 chloramphenicol is increased 5 times.

Caffeine accelerates the absorption of ergotamine.

The simultaneous intake of paracetamol and ethanol increases the risk of hepatotoxic effects and acute pancreatitis.

Metoclopramide and Domperidone increase, and Kolestiramin reduces the rate of absorption of paracetamol.

The drug can reduce the effectiveness of uricosuric drugs.