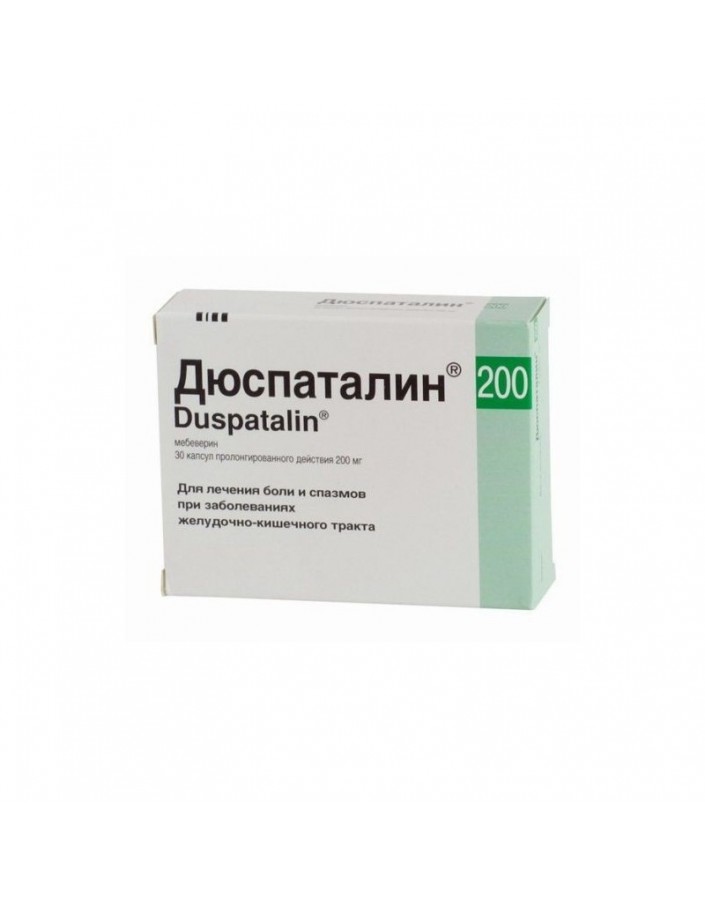 Myotropic antispasmodic. It has a direct relaxing effect on the smooth muscles of the gastrointestinal tract. It lowers the tone and reduces the contractile activity of smooth muscles, without affecting the normal intestinal motility. Since this action is not mediated by the autonomic nervous system, there are no usual anticholinergic side effects. Mebeverin can be prescribed to patients with prostatic hypertrophy.
Retard capsules are a special form of release, providing a gradual release of the active substance and a prolonged effect of the drug.

Absorption and metabolism
When ingested, mebeverine hydrochloride is absorbed from the gastrointestinal tract and is fully metabolized in the body. The first stage of biotransformation is hydrolysis of mebeverin to veratric acid and mebeverine alcohol. Mebeverine alcohol is metabolized to the corresponding carboxylic acid, and part to the demethylated carboxylic acid.
Removal
Excreted in the form of metabolites in the urine.

The use of Duspatalin in pregnancy is possible only if the expected benefit of therapy for the mother outweighs the potential risk to the fetus.
It is possible to use the drug during lactation (breastfeeding) according to indications, because when taken in moderate therapeutic doses, mebeverin is not excreted in breast milk.
AT experimental studies no evidence of tebertogenic mebeverin was detected.

In connection with the absence of the drug m-anticholinergic action, it can be prescribed to patients with prostatic hyperplasia.
Influence on ability to drive motor transport and control mechanisms
There are separate reports on the development of vertigo under the action of mebeverin, which indicates a possible effect of the drug on the psychomotor skills associated with driving a car and operating machines and mechanisms.

Symptoms: theoretically, in some cases, it is possible to increase the excitability of the central nervous system.
Treatment: gastric lavage and symptomatic therapy is recommended. There is no specific antidote.

The drug should be stored in a dry place in the original intact packaging at a temperature of from 0 ° to 25 ° C. Shelf life - 3 years.