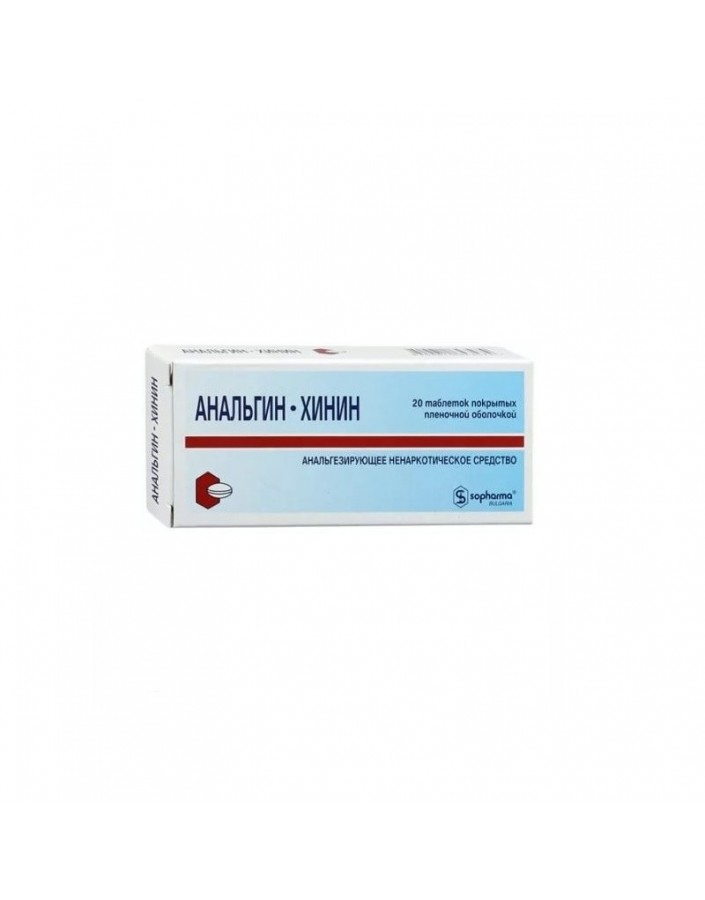 Analgin-quinine - a combined drug, refers to analgesic non-narcotic drugs.
Metamizole sodium is a derivative of pyrazolone and has analgesic, antipyretic and minor anti-inflammatory action, the mechanism of which is associated with inhibition of prostaglandin synthesis.
Quinine is an alkaloid of the cinchona bark, it has antipyretic effect, reduces the excitability of the heart muscle, increases the contractility of the myometrium, causes a contraction of the spleen capsule, and has a slight suppressive effect on the central nervous system.

- moderately or weakly expressed pain syndrome (including headache, toothache, migraine, neuralgia, arthralgia, myalgia, root pain, algomenorrhea);
- pain and fever in acute viral and bacterial diseases of the upper respiratory tract, as well as other infectious and inflammatory diseases;
- fever of various genesis. Use as an antipyretic is advisable after the diagnosis of the disease. The need to use the drug is solved in each case, depending on the severity, nature and tolerability of fever.

- pronounced disorders of the liver and kidneys;
- a tendency to bronchospasm;
- genetic absence of glucose-6-phosphate dehydrogenase;
- diseases of the blood system;
- severe myasthenia gravis;
- inflammation of the middle and inner ear;
- atrial fibrillation and flutter;
- the period of pregnancy (quinine can cause a reduction in myometrium) and breastfeeding;
- children's age up to 6 years;
- hypersensitivity to the components of the drug, as well as to other pyrazolone derivatives (butadione, tribuzone, antipyrine, amidopyrine)

Carefully Analgin-quinine should be prescribed to patients with impaired liver and kidney function, vision and hearing impairment, with angina pectoris and heart failure.
With a long (more than a week) use of the drug, it is necessary to control the picture of peripheral blood and the functional state of the liver. It is advisable to monitor the ECG.
Influence on ability to drive motor transport and control mechanisms
During the period of taking the drug should not perform work that requires increased attention and speed of psychomotor reactions.