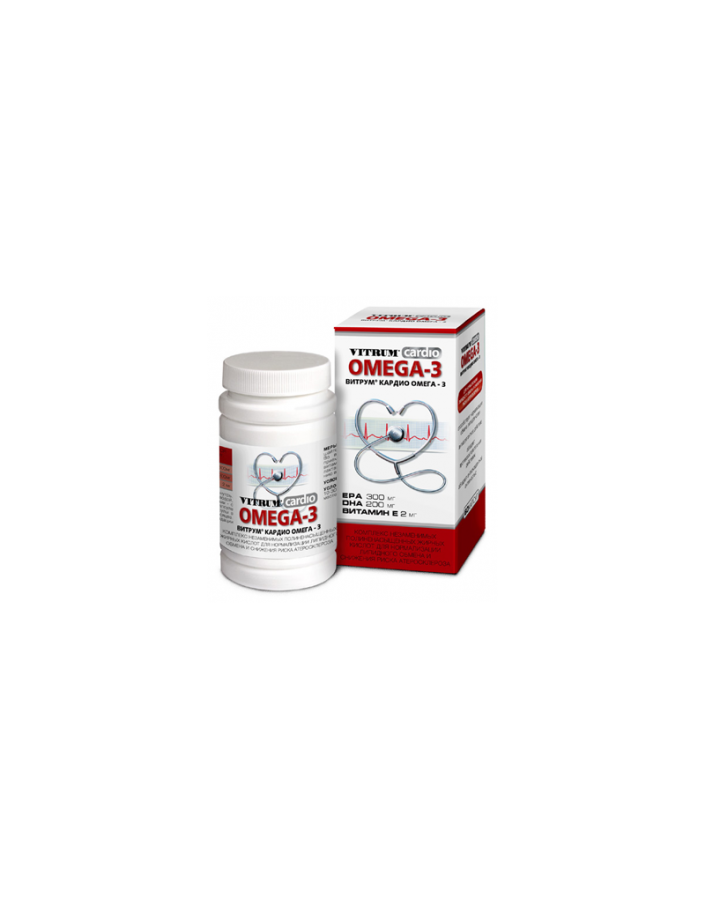 Vitrum® CARDIO OMEGA-3 - natural medicinal product for the effective prevention and complex treatment of atherosclerosis and its complications.
A drug Vitrum® CARDIO OMEGA-3 is a complex of essential polyunsaturated fatty acids of the omega-3 family (omega-3 PUFA) - eicosapentaenoic acid (EPA) and docosahexaene (DHA). A feature of the drug is the optimally selected therapeutically effective dosage of omega-3 PUFA in one capsule and the absence of saturated fatty acids in it.

&№183; Has a normalizing effect on blood lipid metabolism

&№183; Reduces the risk of heart attack and stroke

&№183; Has a normalizing effect on blood pressure

Pharmacological properties
The drug is a combination of polyunsaturated fatty acids (PUFA) of the Omega-3 family of eicosapentaenoic acid (EPA), docosahexaenoic acid (DHA) and vitamin E.
The drug is used in disorders of lipid metabolism, due to severe hypertriglyceridemia, has anti-inflammatory effect. It contributes to the normalization of LDL and VLDL, changes in the liquid properties of cell membranes and increase the functional activity of membrane receptors, which contributes to the improvement of lipid-cell interaction of lipoproteins with enzymes, improvement of lipoprotein metabolism. Contributes to the normalization of blood lipid metabolism. The antiaggregate effect of the drug is associated with the replacement of arachidonic acid in the phospholipid composition of the cell membrane or with the inhibition of platelet aggregation as a result of the influence on the lipid properties of receptors with A2 / prostaglandin H2 thromboxane. Anti-inflammatory effect due to a decrease in the production of metabolites of prostaglandin E2, achieved by the inclusion in the biosynthesis of essential fatty acids. Omega-3 polyunsaturated fatty acids inhibit inflammation, reduce the ability of the arteries to vasoconstriction, reduce platelet aggregation.
This complex of essential polyunsaturated fatty acids is used to normalize lipid metabolism and reduce the risk of atherosclerosis.
Vitamin E has antioxidant activity, is involved in tissue respiration and other important processes of tissue metabolism; protects cells and tissues from the damaging effects of excess free radicals and peroxide products.

Contraindications
Hypersensitivity to the components of the drug, exacerbation of chronic cholecystitis and pancreatitis, exacerbation of diseases of the hepatobiliary system, cholelithiasis; pathological conditions, including hemorrhagic syndrome. Children's age up to 18 years.

Side effect
Allergic reactions. Disorders from the gastrointestinal tract: gastroesophageal reflux or belching with the smell or taste of fish, nausea, vomiting, diarrhea.
With prolonged use in large doses, possible exacerbation of chronic pancreatitis.

Interaction with other drugs
Simultaneous use with oral anticoagulants contributes to the risk of increased bleeding time. Simultaneous administration with Warfarin does not lead to the development of hemorrhagic complications (however, when combined with or after discontinuation of the course of drug treatment, control of prothrombin time is necessary).
Not recommended simultaneous reception with fibrates. While taking the drug "Vitrum"® CARDIO OMEGA-3 ”is not recommended to take other drugs containing vitamin E.

special instructions
Do not exceed the recommended daily dose.

Release form
Capsules
On 30, 60, 100 or 120 capsules in a bottle from polyethylene with the screwed cover from the same material and the safety valve from a foil and a protective strip from polyethylene. A label is stuck on the bottle, the bottle is tightened with plastic wrap and together with the instructions for use are placed in a cardboard box.

Storage conditions
In a dry place at a temperature of 10-30 ° C.
Keep out of the reach of children.