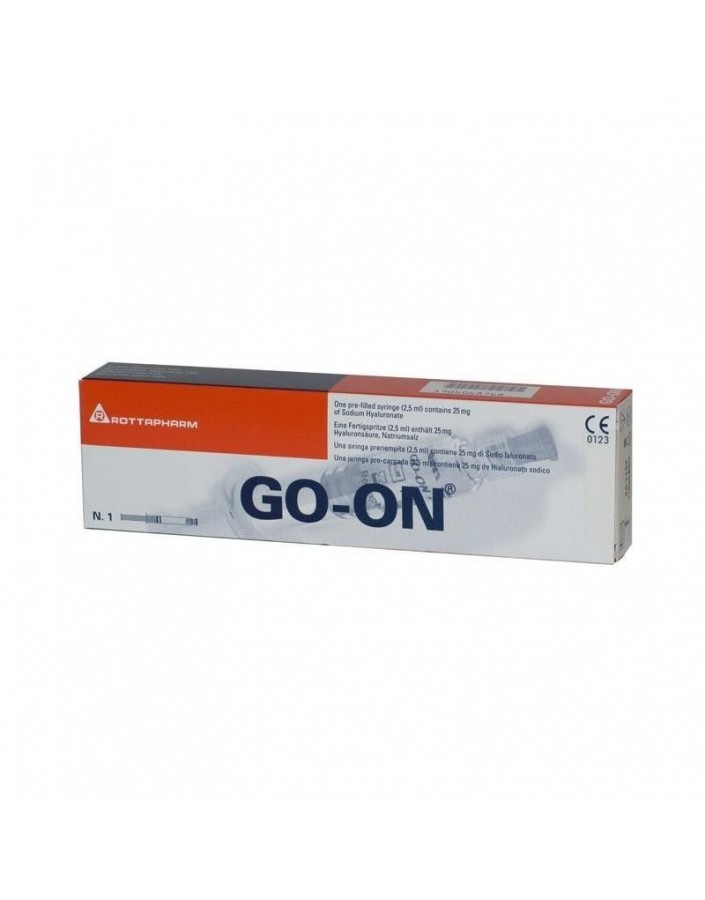 Performing the function of tissue lubrication, sodium hyaluronan plays an important role in regulating the physical and mechanical interaction between the surrounding tissues, in addition, it acts as a viscoelastic element that prevents adhesion of tissues. Different forms of sodium hyaluronan have a different molecular weight, but the same chemical structure. The drug GO-ON is a 1% solution of sodium hyaluronan, which is obtained from a culture of Streptococcus Equi by fermentation and subsequent purification. It was found that as a result of intra-articular injection of sodium hyaluronan solutions, the visco-elastic properties of synovial fluid are improved. In addition, it improves lubrication and shock-absorbing functions, which reduces the mechanical effect on the joint. As a result, pain is reduced and joint mobility is improved. The improvements observed after a course of 5 injections can last up to 6 months or more.

Individual intolerance (including history of hypersensitivity) of sodium hyaluronate.

Although the teratogenic effect of this drug in animals has not been identified, the safety of its use in women has not been determined. The drug is recommended to be prescribed with caution to pregnant women or women planning pregnancy. It was found that sodium hyaluronan in animals is excreted in milk, therefore during the period of treatment it is not recommended to breastfeed.

GO-ON should be injected into the affected joint 5 times at weekly intervals. Several joints can be treated at the same time. Depending on the severity of the joint disease, the effect of the drug after a five-fold administration course may last up to six months or more.If necessary, you can conduct a course of re-treatment. When an articular effusion is formed, it is recommended to puncture, immobilize the joint, put an ice pack and / or insert corticosteroids inside the joint. Treatment with GO-ON can be repeated in 2-3 days. As long as the integrity of the sterile container is not compromised, the contents and surface of the filled syringe remain sterile.

This adverse effect can be removed by attaching an ice bladder to the affected joint for 5-10 minutes.

Some of the preparations of sodium hyaluronate contain a small amount of chicken protein, therefore, in the treatment of patients with appropriate hypersensitivity, caution should be exercised. Special attention should be given to patients suffering from hypersensitivity to drugs.
Sodium hyaluronate should not be administered if there is a significant intra-articular effusion.
General precautions for intra-articular injections should be observed. When treating the skin before the injection can not be used disinfectants containing quaternary ammonium salts.
Before the introduction of the solution must be heated to room temperature.
Sodium hyaluronate should be gently injected into the joint cavity. It is impossible to enter extra-articular, including, into the synovial tissue or joint capsule. In this case, local adverse reactions may occur. It is necessary to prevent the ingestion of the drug in the blood vessels!
As after any other invasive procedure on the joint, after the injection of sodium hyaluronate, the patient is advised to adhere to a gentle regimen and avoid unnecessary strain on the joint for several days.
Do not use if the pre-filled syringe or sterile package is damaged.
The efficacy of a course of treatment containing less than three injections has not been established.
The efficacy and safety of sodium hyaluronate when used for other indications other than osteoarthritis or osteoarthritis has not been established.
Sodium hyaluronate has not been used to treat pregnant women and children under 18 years of age.
During the course of treatment with sodium hyaluronate, anesthetics or other pharmacological preparations are not allowed to be introduced into the cavity of the affected joint.

Data on the incompatibility of the drug GO-ON with other solutions for intra-articular administration is not received.In the first days of treatment with GO-ON, the patient can be prescribed analgesics and anti-inflammatory drugs.