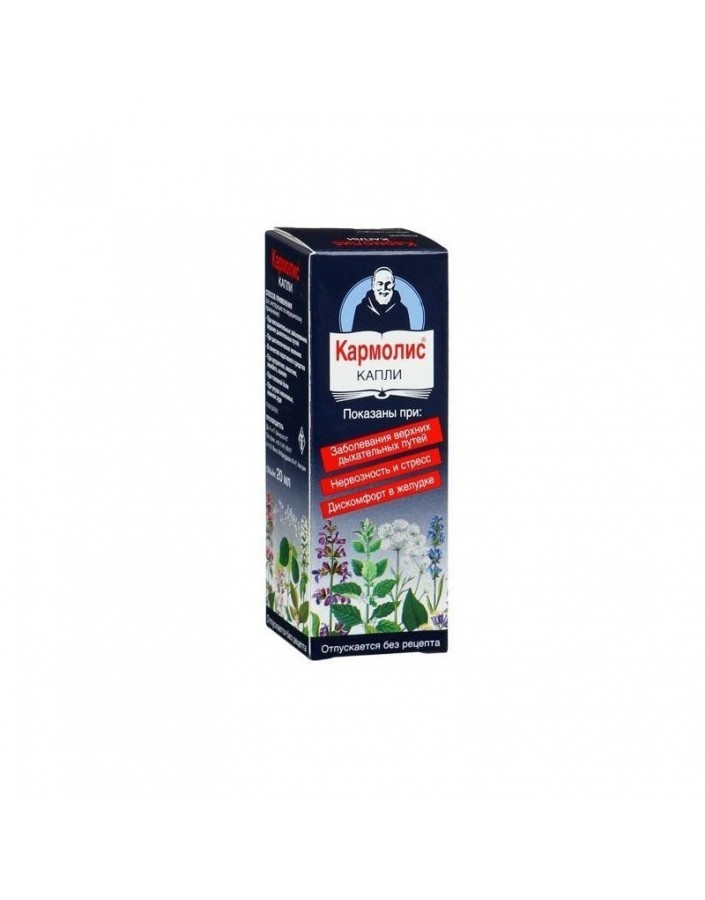 In a bottle of 20 ml drops for oral administration and external use. In packing 1 bottle with a stopper dropper on 1.5 ml.

Carmolis - dietary supplement, combined herbal remedies, the action of which is due to the properties of its constituent components.

Thyme oil has an expectorant effect due to the dilution of sputum, reducing its viscosity and accelerating the evacuation of the bronchi, and also has an antimicrobial and bronchodilatory effect.

Anise oil has an expectorant effect due to increased activity of the ciliated epithelium of the bronchi, as well as antispasmodic and antimicrobial action.

Clove oil has antimicrobial, antifungal and antiviral, as well as antispasmodic action. When applied topically, it has a local irritant and analgesic effect.

Lemon oil increases the functional activity of the stomach.

Muscat oil stimulates the digestive tract, has a choleretic effect.

Menthol has a carminative, choleretic, antispasmodic effect. When applied topically, it has a local irritant and analgesic effect, reduces skin itching.

In the complex therapy of the following diseases and conditions:
- Treatment and prevention of inflammatory diseases of the upper respiratory tract (including influenza and SARS).
- Phenomena of dyspepsia (including nausea, heaviness in the epigastric region, flatulence).
- Increased nervous irritability and irritability, a sense of internal tension.

- Inflammatory diseases of the upper respiratory tract, accompanied by a cough.

For the treatment and prevention of inflammatory diseases of the upper respiratory tract, adults are prescribed orally for 10-20 drops diluted in a glass of water or 3-5 drops per piece of sugar up to 5 times / day. For inhalations, 20-25 drops are added to 1 liter of hot water, mixed and breathed with steam under a towel. When coughing, the drug is applied to the skin of the breast and the interscapular region and is well ground, after which the indicated areas are covered with a warm cloth.

In arthralgia, myalgia, lumbago, sciatica, the drug is applied to the affected area. To enhance the therapeutic effect of the painful area should be kept warm (cover with a warm cloth or bandage).

When symptoms of dyspepsia and as a sedative, the drug is administered orally 3-4 times / day for 10-20 drops on a piece of sugar or diluted in a glass of water.

Wash hands thoroughly after using the product for grinding.

It should be borne in mind that the drug contains 64% ethanol. The average recommended dose contains 540 mg of ethanol. The content of ethanol should also be considered when simultaneously prescribing other drugs.