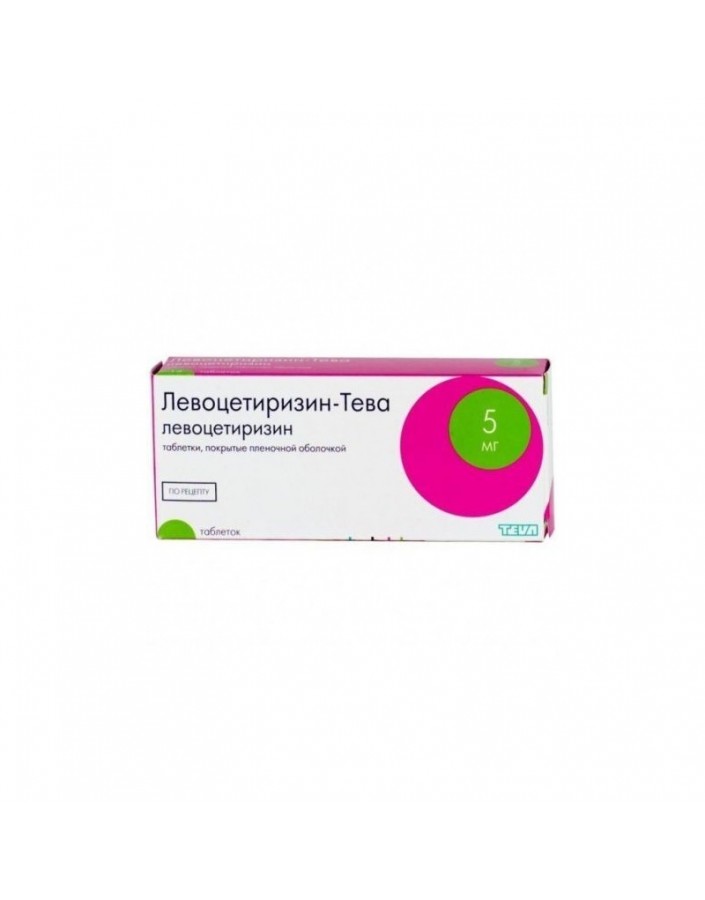 Pharmacological properties
Pharmacodynamics
Levocetirizine - Cetirizine enantiomer, belongs to the group of competitive histamine antagonists, blocks the H1-histamine receptors (H1-GR), has a high level of selectivity for H1-GR. Levocetirizine has an effect on the histamine-dependent stage of allergic reactions, inhibiting eotaxins that promote transendothelial migration of eosinophils, blocking the expression of vascular cell adhesion molecule 1, reduces eosinophil migration, reduces vascular permeability, limits the release of inflammatory mediators. It prevents the development and facilitates the course of an allergic reaction, has anti-exudative, antipruritic action, practically does not have anticholinergic and antiserotonin action.In therapeutic doses, it has almost no sedative effect, does not change the electrocardiogram (ECG) indices, in particular, the QT interval.

Pharmacokinetics
The pharmacokinetic parameters of levocetirizine vary linearly and are practically the same as cetirizine pharmacokinetics.
Suction. After oral administration, levocetirizine is rapidly absorbed in the gastrointestinal tract. Meal does not affect the degree of absorption, although its rate decreases. After a single ingestion in a therapeutic dose, the maximum concentration (Cmax) in the blood plasma in adults is reached after 0.9 h and is 207 ng / ml, after repeated administration at a dose of 5 mg / day - 308 ng / ml. Bioavailability is 100%.
Distribution. Equilibrium concentration is reached after 2 days. The binding of levocetirizine to plasma proteins is 90%. The volume of distribution of the drug is 0.4 l / kg.
Metabolism. Less than 14% is metabolized in the liver by including the processes of oxidation of aromatic compounds, N- and O-dealkylation and conjugation of Taurine. Dealkylation occurs in the presence of a CYP3A4 isoenzyme, and numerous and / or unidentified P450 isoenzymes are involved in the oxidation of aromatic compounds. Levocetirizine does not affect the activity of CYP1A2, CYP2C9, CYP2C19, CYP2D6, CYP2E1, and CYP3A4 isoenzymes at a concentration significantly higher than C max after a 5 mg oral dose. Due to the low level of metabolism and the lack of metabolic potential, the interaction of levocetirizine with other drugs seems unlikely.
Inference.In adults, the elimination half-life (T1 / 2) is 7.9 ± 1.9 h, the total clearance is 0.63 ml / min / kg. Fully excreted from the body within 96 hours. About 85.4% of the dose is excreted by the kidneys unchanged by glomerular filtration and tubular secretion; about 12.9% is excreted in the feces.
Pharmacokinetics in special clinical situations. In patients with renal insufficiency (creatinine clearance (CC) less than 40 ml / min), the clearance of levocetirizine decreases, and T1 / 2 increases (in patients on hemodialysis, the total clearance decreases by 80%), which requires a corresponding change in dosing regimen. Less than 10% of levocetirizine is removed during the standard 4-hour hemodialysis procedure. In children of the younger age group T1 / 2 decreases.

Indications for use
Symptomatic treatment:

Dosage and administration
Inside, regardless of the meal. The pills are chewed and washed down with water.
Adults and children over 6 years: 5 mg once a day, daily.
The duration of application depends on the duration of symptoms of the disease. On average, use 3-6 weeks, in the case of a short period of exposure to the allergen may be enough use within 1 week. With a long chronic course of the disease, treatment can last up to 6 months.
Elderly patients: no need to adjust the dose.
Patients with impaired renal function: the dose should be adjusted depending on the CC (see table).

Overdose
Symptoms: drowsiness (in adults), agitation and anxiety, alternating with sleepiness (in children).
Symptomatic treatment: immediately after taking the drug hold a gastric lavage or induce artificial vomiting.The use of activated charcoal, symptomatic and supportive therapy is recommended. There is no specific antidote. Hemodialysis is ineffective.

Interaction with other drugs
When studying drug interactions of levocetirizine with pseudoephedrine, cimetidine, Ketoconazole, Erythromycin, Azithromycin, glipizide and diazepam, no clinically significant undesirable interaction was revealed. Simultaneous use with macrolides or ketoconazole did not cause significant changes in the ECG.
With simultaneous use with theophylline (400 mg / day), the total clearance of cetirizine is reduced by 16%, the pharmacokinetic parameters of theophylline do not change.
In some cases, the simultaneous use of levocetirizine with ethanol or drugs that have a depressant effect on the central nervous system (CNS) may increase their influence on the central nervous system, although it has been proven that levocetirizine does not enhance the effect of ethanol.

special instructions
Do not exceed the recommended daily dose.
The patient must be warned that drinking alcohol during treatment with levocetirizine is not recommended.

Influence on ability to drive motor transport and control mechanisms
The ability to drive motor vehicles and work with mechanisms when applying levocetirizine at the recommended dose does not change. However, given that during the treatment period, adverse reactions may develop (drowsiness,dizziness) care must be taken during the occupation of potentially hazardous activities that require increased concentration and psychomotor speed.

Storage conditions
Store at a temperature not higher than 25 ° С.
Keep out of the reach of children.