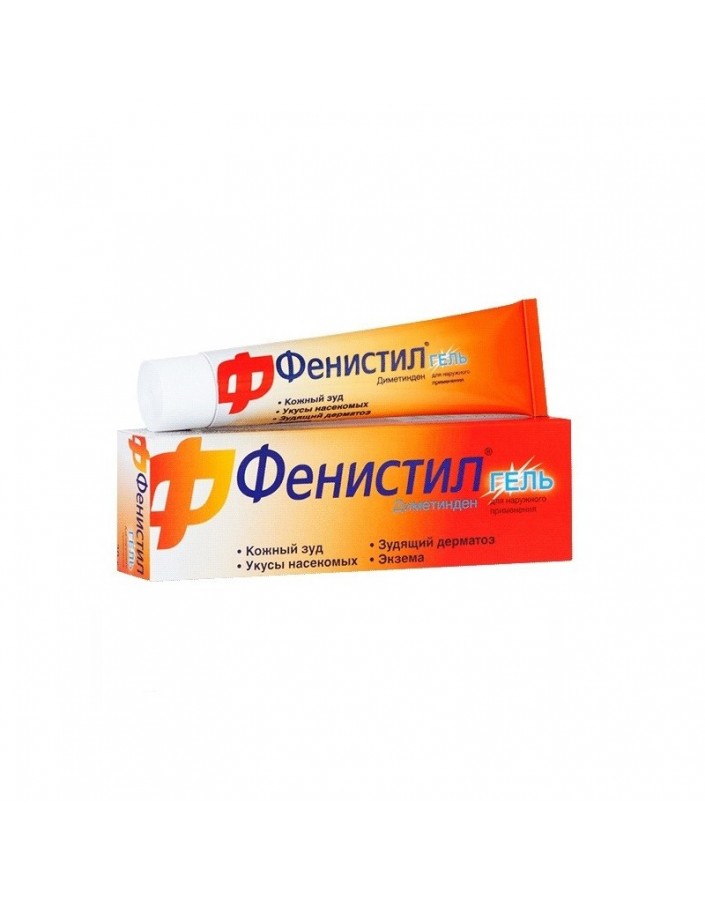 Preparation with antiallergic action for external use

Histamine H blocker1-receptors. It has anti-allergic and antipruritic effect. Reduces the increased capillary permeability associated with allergic reactions. When applied to the skin, it reduces itching and irritation caused by skin-allergic reactions.

The drug also has a pronounced local anesthetic effect.

Blocks the action of kinins, has a weak anticholinergic effect.

When applied externally due to the gel basis, the action begins after a few minutes and reaches a maximum after 1-4 hours.

When applied topically, it penetrates the skin well. Systemic bioavailability of the active substance is 10%.

Pruritus of various origin (except associated with cholestasis) with:

Apply externally. The gel should be applied to the affected skin 2-4 times / day. In cases of severe itching or common skin lesions, simultaneous oral administration is recommended.

- Hypersensitivity to dimetindenu and other components that make up the drug.

WITH caution Fenistil should be prescribed® during pregnancy (I term) and during lactation (breastfeeding).

Application Fenistil in the first trimester of pregnancy is possible only after consulting a doctor.

In the second and third trimesters of pregnancy and during lactation, the gel should not be used on large areas of the skin, especially in the presence of inflammation and bleeding.

Nursing mothers should not put the drug on the nipples of the mammary glands.

In infants and young children should not use the drug in large areas of the skin, especially in the presence of signs of inflammation or bleeding.

In cases of severe itching or damage to large areas of the skin, the drug can be used only after consulting a doctor.

When applying Fenistil gel over large areas of the skin should avoid exposure to sunlight.

If during the period of Fenistil use, the severity of symptoms of the disease does not diminish or increases, consultation with a doctor is necessary.

The drug is ineffective with itching associated with cholestasis.

No cases of drug overdose have been reported.

Drug interaction of the drug Fenistil® not described.

The drug should be stored out of reach of children at a temperature not exceeding 25 ° C.