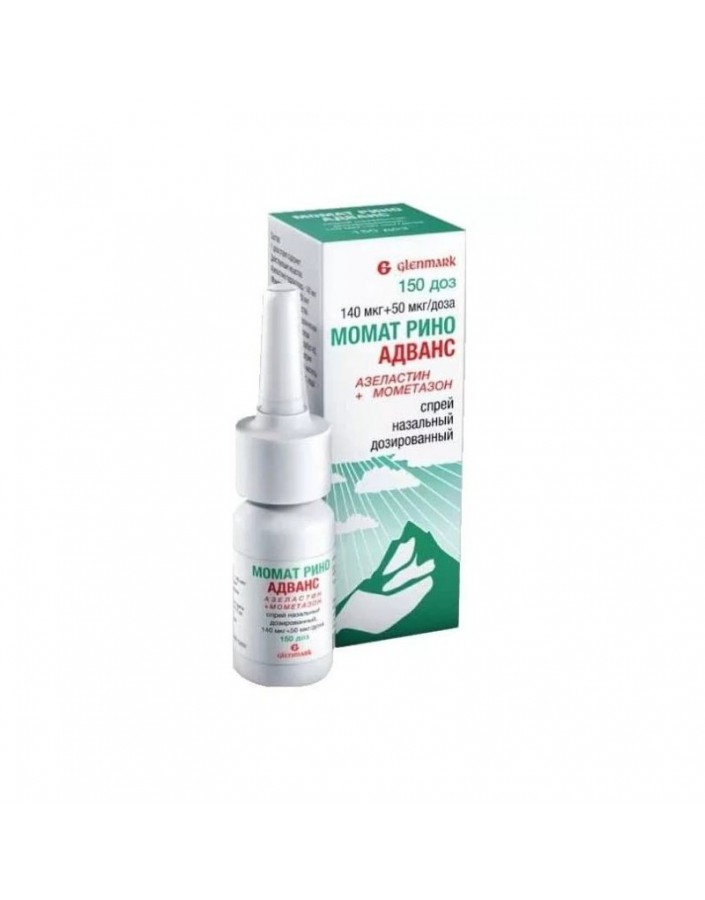 mometasone is a synthetic glucocorticosteroid (GCS) for topical use. It has anti-inflammatory and anti-allergic effects when used in doses that do not cause systemic effects. Slows down the release of inflammatory mediators. Increases the production of lipomodulin, which is an inhibitor of phospholipase A, which leads to a decrease in the release of arachidonic acid and, respectively. inhibition of the synthesis of products of the metabolism of arachidonic acid - cyclic endoperoxides, prostaglandins.It warns the regional accumulation of neutrophils, which reduces inflammatory exudate and production of lymphokines, inhibits the migration of macrophages, leads to a decrease in the processes of infiltration and granulation. Reduces inflammation by reducing the formation of chemotaxis substance (the effect on late allergy reactions), inhibits the development of an immediate type of allergic reaction (due to inhibition of the production of arachidonic acid metabolites and reduced release of inflammatory mediators from mast cells).

Mometasone furoate. With intranasal use, the systemic bioavailability of the momet-furoate zone is <1% (with a detection method sensitivity of 0.25 pg / ml). The mometasone suspension is very poorly absorbed in the gastrointestinal tract, and the small amount of mometasone suspension that can enter the gastrointestinal tract after nasal inhalation, even before excretion with urine or bile, is subjected to an active primary metabolism.

Hypersensitivity to any of the components of the drug.

- Recent surgery or injury of the nose with damage to the mucous membrane of the nasal cavity - until the wound heals (due to the inhibitory effect of the SCS on the healing process).

Children's age up to 18 years - due to the lack of relevant data.

Tuberculosis infection (active and latent) of the respiratory tract, untreated fungal, bacterial, systemic viral infection or Herpes simplex infection with eye damage (as an exception, the drug may be prescribed for the listed infections as directed by the doctor), the presence of an untreated infection involving the mucous process shell of the nasal cavity.

A properly planned and buried controlled study of the drug in pregnant women has not been conducted.

Azelastine hydrochloride can cause toxicity during fetal development in mice, rats and rabbits.

The use of the drug during pregnancy and during breastfeeding is contraindicated.

It is intranasal. Inhalation of the suspension contained in the vial is carried out using a special dispensing nozzle on the vial. On 1 dose of spray (azelastine hydrochloride - 140 µg / momstazona furoate - 50 µg) in each nostril 2 times a day, morning and evening. Duration of treatment is 2 weeks.

Often: headache, dysgeusia (unpleasant taste) as a result of misuse. namely, when the head is excessively deflected back during administration.

Very rarely, dizziness (may be caused by the disease itself).

Seldom: feeling of irritation of a mucous membrane of a throat, nausea.

Disturbances of the respiratory system, organs of the chest and mediastinum: Often: nasal bleeding, discomfort in the nasal cavity (burning sensation, itching), ulceration of the nasal mucosa, sneezing, pharyngitis, sinusitis, infections of the upper respiratory tract.

Violations of the skin and subcutaneous tissues:

Very rarely: fatigue, drowsiness, weakness (may be caused by the disease itself).

With long-term use of glucocorticosteroids (GCS) in high doses, systemic side effects, including glaucoma and cataracts, may develop.

Azelastine. There were no clinically significant interactions with other drugs with the intranasal use of azelastip.

At the moment, cases of overdose of the drug with inranasal application is unknown. In case of an overdose of azelastine as a result of accidental ingestion, there may be disturbances in the nervous system (drowsiness, confusion, tachycardia, hypotension). Therapy for these disorders is symptomatic. With prolonged use of glucocorticosteroids in high doses, as well as with the simultaneous use of several corticosteroids, the hypothalamic-pituitary-adrenal system may be inhibited. Due to the low systemic bioavailability of the drug is unlikelythat in case of an accidental or deliberate overdose, it will be necessary to take any measures other than observation, with possible subsequent resumption of the drug in the recommended dose.

Do not use after the expiration date printed on the package.