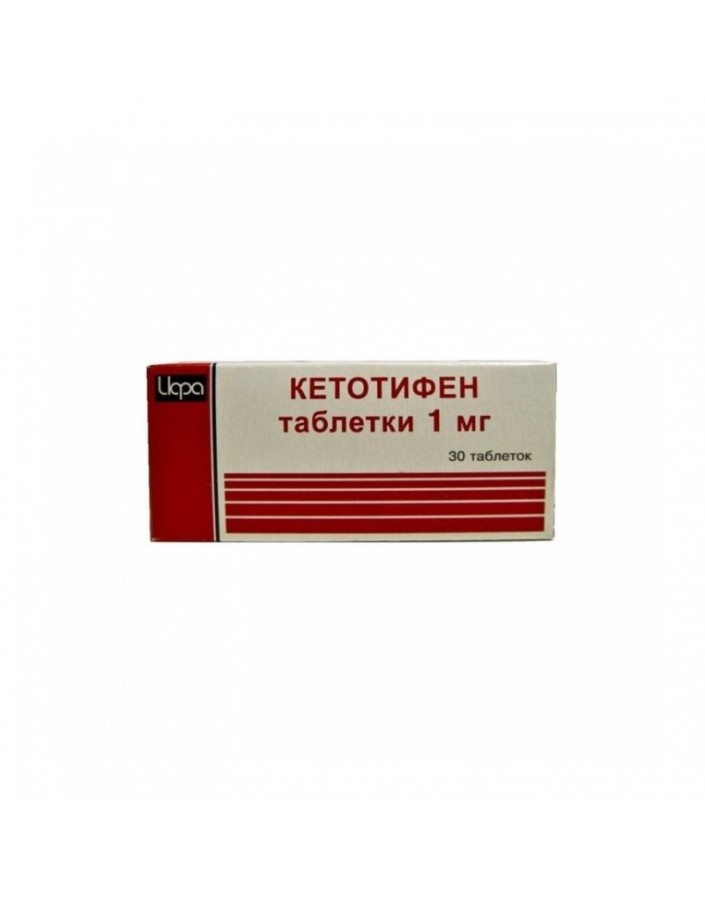 In a blister pack of 10 tablets. In a cardboard bundle 3 packs.

Ketotifen - a stabilizer of mast cell membranes, has moderate H 1 -histamino blocking activity, inhibits the release of histamine, leukotrienes from basophils and neutrophils, reduces the accumulation of eosinophils in the respiratory tract and the reaction to histamine, suppresses early and late asthmatic reactions to the allergen.

Prevents the development of bronchospasm, does not have a bronchodilating effect.

Inhibits phosphodiesterase, resulting in an increased content of cAMP in the cells of adipose tissue.

The therapeutic effect is fully manifested in 1.5-2 months. from the start of therapy.

Contraindicated use during pregnancy and breastfeeding.

The duration of treatment is at least 3 months.

The abolition of therapy is carried out gradually, within 2-4 weeks.

On the part of urination: dysuria, cystitis.

The abrupt cancellation of the previous treatment with beta-adrenostimulants, glucocorticosteroids, ACTH in patients with bronchial asthma and bronchospastic syndrome after joining Ketotifen therapy is undesirable, and the withdrawal is carried out for at least 2 weeks, gradually reducing the dose.

Persons sensitive to sedative action, in the first 2 weeks, the drug is prescribed in small doses.

Not intended for the relief of an asthma attack.

In patients receiving oral hypoglycemic agents at the same time, the number of platelets in the peripheral blood should be monitored.

During the period of treatment, it is necessary to refrain from driving vehicles and practicing potentially hazardous activities that require increased concentration and psychomotor speed.

In combination with hypoglycemic drugs increases the likelihood of thrombocytopenia.