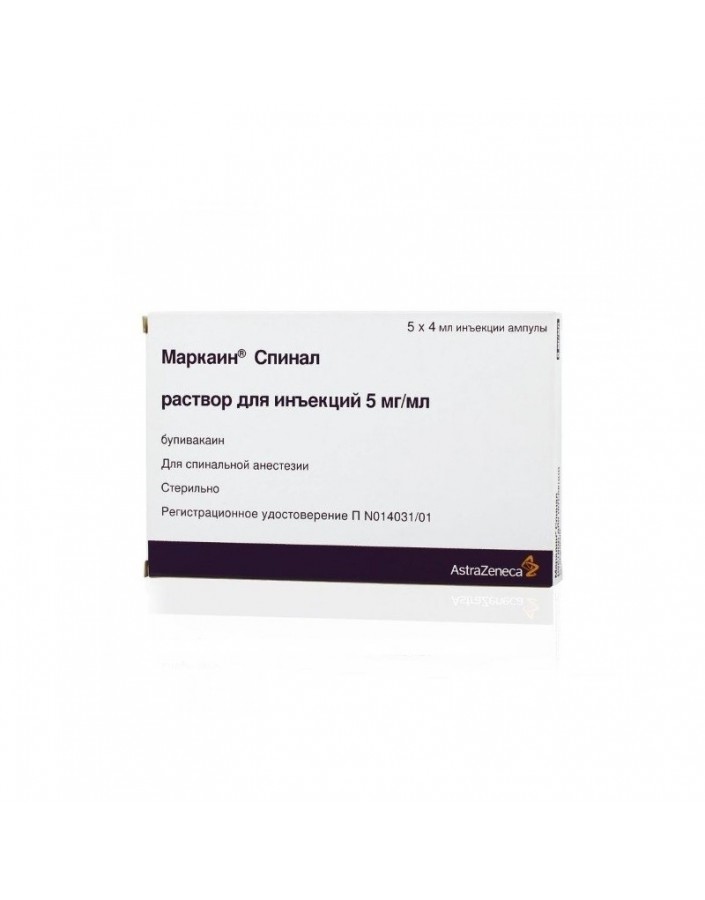 Markain spinal - a local amide type anesthetic. With intrathecal administration, the effect is rapid, and its duration varies from moderate to prolonged. The duration of the effect depends on the dose.
The solution of the drug is hyperbaric and its distribution in the subarachnoid space is affected by gravity. A small volume of distribution in the intrathecal space leads to a lower average concentration and a decrease in the duration of the effect of the drug as compared with the isobaric solution. Solutions that do not contain dextrose give a less predictable level of blockade. The relative density at a temperature of 20 ° C is 1.026 (which corresponds to 1.021 at a temperature of 37 ° C). The pH of the solution is 4.0-6.0.
Bupivacaine reversibly inhibits the conduction of impulses along the nerve fiber by blocking the passage of sodium ions through the cell membrane.

Intrathecal anesthesia (subarachnoid, spinal) with surgical and obstetric interventions:
- On the lower abdomen (including caesarean section).
- On the lower limbs (including the hip joint).
- In urological operations lasting 1.5-3 hours.

- Hypersensitivity to any of the components of the drug or to other local anesthetics of the amide type.
- General contraindications for intrathecal anesthesia should be taken into account: acute diseases of the central nervous system (CNS), such as meningitis, poliomyelitis, intracranial hemorrhage, and also CNS neoplasms; narrowing of the spinal canal and spinal cord disease in the acute phase (spondylitis, tumor) or a recent injury (fracture) of the spine; septicemia; pernicious anemia with subacute combined degeneration of the spinal cord; pustular skin lesion at the site of the intended puncture or adjacent to the puncture site; cardiogenic or hypovolemic shock; bleeding disorder or concomitant anticoagulant therapy.
Carefully:
- Weakened elderly patients or patients with severe concomitant diseases such as: atrioventricular block II and III; severe renal or hepatic impairment, however, regional anesthesia is preferable to these patient groups.
- Patients taking antiarrhythmic drugs of class III (eg, amiodarone) need careful observation and monitoring of the ECG due to the possibility of the development of adverse events from the cardiovascular system.
- There is an increased risk of high or complete spinal blockade: in elderly patients; in patients in late pregnancy. Therefore, in these patients it is recommended to use reduced doses of the drug.
- When performing intrathecal anesthesia in patients with neurological diseases such as multiple sclerosis, hemiplegia, paraplegia and neuromuscular disorders, although it is not proven that intrathecal anesthesia leads to a worsening of the condition in these diseases. Before performing intrathecal anesthesia in such cases, it is necessary to ensure that the potential benefit to the patient outweighs the potential risk.
- In patients receiving other local anesthetics or drugs that are structurally similar to local amide-type anesthetics, such as antiarrhythmic drugs (for example, Lidocaine, meksiletin), because of the possibility of an additive toxic effect.

Bupivacaine was used in a large number of pregnant women and women of childbearing age. No effect of the drug on reproductive function or an increase in the incidence of malformations was noted.In patients in late pregnancy it is recommended to use reduced doses of the drug.
Bupivacaine penetrates into breast milk in quantities that do not pose a danger to the baby.

Intrathecal anesthesia should only be carried out under the supervision of an experienced specialist in a properly equipped operating room.
Medicines and medical equipment for resuscitation should be prepared for use. Before intrathecal anesthesia, venous access should be provided, for example, in the form of a venous catheter.
Anesthesia personnel should be adequately trained and trained in the diagnosis and treatment of possible side effects, systemic toxic reactions or other possible complications.
Like other local anesthetics, bupivacaine can cause acute toxic reactions from the central nervous and cardiovascular systems, if its use for local anesthesia leads to a high concentration of the drug in the blood. This can especially be the case in case of an unintentional intravascular injection. Against the background of a high concentration of bupivacaine in plasma, cases of ventricular arrhythmia, ventricular fibrillation, sudden cardiovascular collapse and death have been recorded.However, the doses commonly used for intrathecal anesthesia do not lead to a high systemic concentration of the drug.
A rare, but at the same time, serious adverse reaction that can develop during spinal anesthesia is a high or complete spinal block, leading to inhibition of the activity of the cardiovascular and respiratory systems.
Disorders of the cardiovascular system are caused by extensive sympathetic blockade, which can lead to hypotension, bradycardia, and even cardiac arrest. The blockade of innervation of the respiratory muscles, including the diaphragm, causes respiratory failure.
In patients with hypovolemia during intrathecal anesthesia, severe hypotension may develop, regardless of the local anesthetic used. Hypotension, which usually occurs in adults after intrathecal blockade, is rarely observed in children under the age of 8 years.
Nerve damage is a rare complication of intrathecal anesthesia and can lead to paresthesia, anesthesia, muscle weakness, and paraplegia. Occasionally, these violations are permanent.
Markain Spinal contains no preservatives, the ampoule is intended for single use. Residual solution should be discarded.
Since dextrose is part of Markain Spinal, caramelization is possible during autoclaving, and therefore, repeated sterilization is not recommended.

Bupivacaine should be used with caution in patients receiving other local anesthetics or drugs that are similar in structure to local amide-type anesthetics, such as antiarrhythmic drugs (eg, lidocaine, meksiletin), because of the possibility of an additive toxic effect. The combined use of bupivacaine with class III antiarrhythmic drugs (eg, amiodarone) has not been studied separately, but caution is advised when taking these drugs at the same time.
When processing the injection site of a local anesthetic with disinfectant solutions containing heavy metals, the risk of developing a local reaction in the form of pain and swelling increases.
When combined with drugs that inhibit the central nervous system, local anesthetics enhance the oppression of the central nervous system.
Monoamine oxidase inhibitors or tricyclic antidepressants together with bupivacaine increase the risk of a pronounced increase in blood pressure.
The combination of bupivakina with general inhalation anesthesia with halothane increases the risk of arrhythmia.
It is not recommended to mix solutions for intrathecal anesthesia with other drugs.

Symptoms of acute systemic toxicity: the use of Markain Spinal Heavy in accordance with the recommendations does not lead to such a concentration of the drug in the plasma at which systemic toxic manifestations may occur.However, when using Markaina Spinal Hevi in ​​combination with other local anesthetics, acute systemic toxicity may develop due to the summation of toxic effects.
Like other local anesthetics, bupivacaine can cause acute toxic reactions from the central nervous and cardiovascular systems, if its use for local anesthesia leads to a high concentration of the drug in the blood. This can especially occur in the case of unintentional intravascular injection. Against the background of a high concentration of bupivacaine in plasma, cases of ventricular arrhythmia, ventricular fibrillation, sudden cardiovascular collapse and death have been recorded. However, the doses commonly used for intrathecal anesthesia do not lead to a high systemic concentration of the drug.
Symptoms of the central nervous system: with the use of bupivacaine, intoxication appears gradually in the form of signs and symptoms of dysfunction of the central nervous system with increasing severity. The initial manifestations of intoxication are: paresthesia around the mouth, dizziness, numbness of the tongue, pathologically increased perception of ordinary sounds and tinnitus. Impaired vision and tremor are more serious symptoms and precede the development of generalized seizures. These phenomena should not be mistakenly regarded as neurotic behavior.Following them, loss of consciousness and the development of large convulsive seizures are possible, which can last from a few seconds to a few minutes. Due to increased muscular activity, disturbances in the normal respiratory process after the onset of seizures quickly appear hypoxia and hypercapnia. In severe cases, apnea may develop. Acidosis enhances the toxic effect of local anesthetics. These phenomena are due to the redistribution of local anesthetic from the central nervous system and drug metabolism. The relief of toxic effects can occur quickly, unless an anesthetic has been introduced in very large quantities.
Treatment of acute systemic toxicity: when the first signs of acute systemic toxicity or total spinal block appear, the administration of the drug should be immediately stopped and symptomatic therapy of cardiovascular and neurological (convulsions, CNS depression) disorder should be performed. In the case of cardiac arrest, should immediately resort to cardiopulmonary resuscitation. It is vital to maintain the ventilation of the lungs, blood circulation and adequate oxygenation, as well as to correct the acidosis. When oppressing the activity of the cardiovascular system (arterial hypotension, bradycardia), intravenous administration of 5-1.0 mg of ephedrine is necessary, which, if necessary, can be repeated after 2-3 minutes. Children should be given a dose of ephedrine in accordance with their age and weight. In the event of convulsions, therapy should be carried out aimed at maintaining the activity of the cardiovascular system, ensuring adequate oxygenation and stopping the convulsions. If necessary, oxygen supply and artificial ventilation of the lungs should be provided (using an Ambu bag or tracheal intubation). If convulsions do not stop on their own within 15–20 seconds, anticonvulsant agents should be used: sodium thiopental 1-3 mg / kg IV ensures rapid relief of convulsions; 0.1 mg / kg of diazepam can be used in / in (the action develops more slowly compared to the action of thiopental). Prolonged cramps can interfere with ventilation and oxygenation. In such cases, for rapid relief of seizures, one can resort to tracheal intubation and the introduction of muscle relaxant (for example, succinylcholine 1 mg / kg).