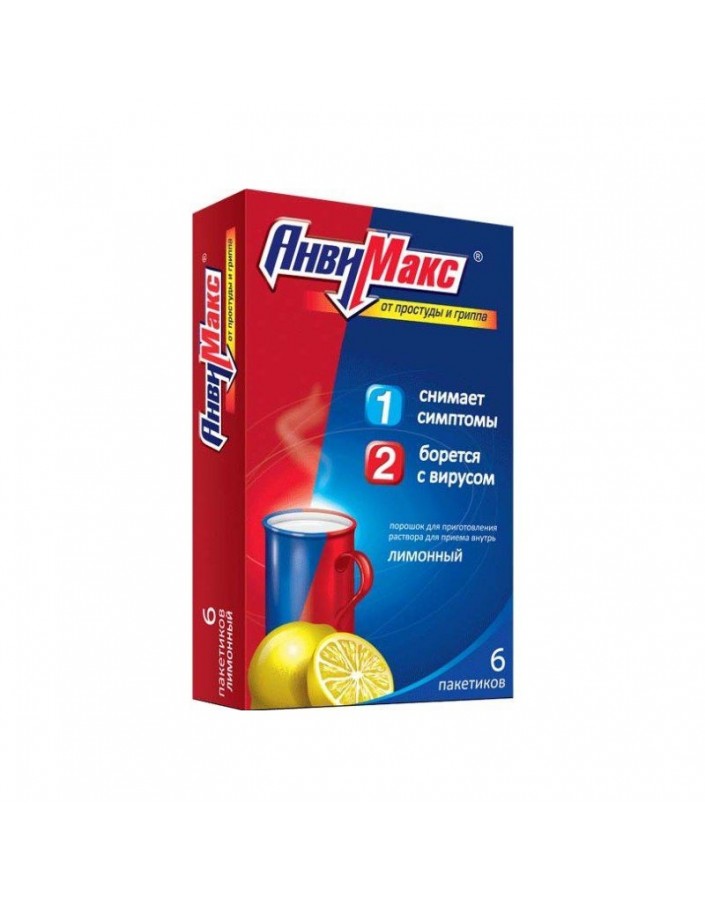 ANVIMAX POWDER FOR INTERNAL USE LEMON

Paracetamol. Absorption is high. Communication with plasma proteins - 15%. It penetrates the blood-brain barrier. Metabolized in the liver in three main ways: conjugation with glucuronides, conjugation with sulfates, oxidation by microsomal liver enzymes. In the latter case, toxic intermediate metabolites are formed, which are subsequently conjugated with glutathione, and then with cysteine ​​and mercapturic acid. The main isoenzymes of cytochrome P450 for this pathway are the isoenzyme CYP2E1 (predominantly), CYP1A2, and CYP3A4 (secondary role). When glutathione is deficient, these metabolites can cause damage and necrosis of hepatocytes. Additional metabolic pathways are hydroxylation to 3-hydroxy paracetamol and methoxylation to 3-methoxy paracetamol, which are subsequently conjugated with glucuronides or sulfates. In adults, glucuronidation prevails. Conjugated paracetamol metabolites (glucuronides, sulfates and conjugates with glutathione) have low pharmacological (including toxic) activity. Excreted by the kidneys as metabolites, mainly conjugates, only 3% unchanged. In elderly patients, the clearance of the drug decreases and the half-life increases. According to the results of clinical studies, the following pharmacokinetic parameters of paracetamol were established: the maximum plasma concentration is achieved with the use of powder after 0.7 ± 0.39 h and is 4.79 ± 1.81 mcg / ml, the half-life is 2.73 ± 0, 76 hours

Vitamin C absorbed in the gastrointestinal tract (mainly in the jejunum). Communication with plasma proteins - 25%. Diseases of the gastrointestinal tract (peptic ulcer and 12 duodenal ulcers, constipation or diarrhea, worm infestation, giardiasis), the use of fresh fruit and vegetable juices, alkaline drinking reduces the absorption of ascorbic acid in the intestine. The plasma ascorbic acid concentration is normally around 10-20 μg / ml. The time of maximum concentration in the blood plasma after oral administration is 4 h. It penetrates easily into leukocytes, platelets, and then into all tissues; the greatest concentration is reached in the glandular organs, leukocytes, liver and lens of the eye; penetrates through the placenta. The concentration of ascorbic acid in leukocytes and platelets is higher than in erythrocytes and in plasma. In deficient states, the concentration in leukocytes decreases later and more slowly and is considered as a better criterion for assessing the deficit than the concentration in plasma. Metabolized predominantly in the liver to deoxyascorbic and then to oxaloacetic acid and ascorbate 2-sulfate. Excreted by the kidneys, through the intestines, with then unchanged and in the form of metabolites. Smoking and the use of ethanol accelerate the destruction of ascorbic acid (turning into inactive metabolites), sharply reducing reserves in the body. It is derived during hemodialysis.

Calcium gluconate Approximately 1 / 5-1 / 3 of orally administered Calcium gluconate is absorbed in the small intestine; this process depends on the presence of ergocalciferol, the pH, dietary patterns and the presence of factors capable of binding calcium ions.Absorption of calcium ions increases with its deficiency and the use of a diet with a reduced content of calcium ions. About 20% is excreted by the kidneys, the rest (80%) - by the intestines.

Rimantadine After ingestion is almost completely absorbed in the intestine. Absorption is slow. Communication with plasma proteins is about 40%. Distribution volume - 17-25 l / kg. Concentration in nasal secretion is 50% higher than plasma. Metabolized in the liver. More than 90% is excreted by the kidneys within 72 hours, mainly in the form of metabolites, 15% - unchanged. In chronic renal failure, the half-life increases by 2 times. In patients with renal insufficiency and in elderly people, it can accumulate in toxic concentrations if the dose is not adjusted in proportion to the decrease in creatinine clearance. Hemodialysis has a minor effect on the clearance of rimantadine. According to the results of clinical studies, the following pharmacokinetic parameters of rimantadine were established: the maximum plasma concentration is achieved with the use of the powder after 5.28 ± 2.54 h and is 69.0 ± 19.7 ng / ml, the half-life is 33.26 ± 12, 76 hours

Loratadine. Quickly and completely absorbed in the gastrointestinal tract. The maximum concentration in the elderly increases by 50%. Communication with plasma proteins - 97%.Metabolized in the liver to form the active metabolite of descarboethoxyloratadine with the participation of cytochrome CYP3A4 isoenzymes and to a lesser extent CYP2D6. Does not penetrate the blood-brain barrier. Excreted by the kidneys and with bile. In patients with chronic renal failure and during hemodialysis, the pharmacokinetics are virtually unchanged. According to the results of clinical studies, the following pharmacokinetic parameters of loratadine were established: the maximum plasma concentration is reached after 3.28 ± 1.25 h and is 1.85 ± 0.95 ng / ml, the half-life is 11.29 ± 5.52 h .

Restricting use of epilepsy ), hypercalciuria. Elderly patients with arterial hypertension (increased risk of hemorrhagic stroke due to rimantadine, which is part of the drug).

Dissolve the contents of one sachet in half a glass of boiled warm water. Use immediately after dissolving. Before use, stir the solution. Adults: take 1 sachet 2-3 times a day after meals for 3-5 days (no more than 5 days) until the symptoms of the disease disappear.

From the side of the central nervous system: Increased excitability, drowsiness, tremor, hyperkinesia, dizziness, headache, "flushes" of blood to the face.

From the digestive system: Lesions of the mucous membrane of the stomach and duodenum, dyspepsia, dry mucous membranes in the mouth, lack of appetite, bloating (flatulence), diarrhea (diarrhea).

From the urinary system: Moderate pollakiuria.

From the side of blood-forming organs: Changes in blood counts. Control is needed

Other: Inhibition of the insular apparatus of the pancreas (hyperglycemia, glycosuria).

Treatment: the introduction of SH-group donators and precursors of the synthesis of glutathione - methionine within 8-9 hours after overdose and acetylcysteine ​​- within 8 hours. Gastric lavage, symptomatic therapy. The need for additional therapeutic measures (further introduction of methionine, acetylcysteine) is determined depending on the concentration of paracetamol in the blood, as well as the time elapsed after its administration.

Paracetamol reduces the effectiveness of uricosuric drugs. The concomitant use of paracetamol in high doses increases the effect of anticoagulant drugs. Inductors of microsomal oxidation in the liver (phenytoin, barbiturates, rifampicin, phenylbutazone, tricyclic antidepressants), ethanol and hepatotoxic drugs increase the production of hydroxylated active metabolites, which makes it possible to develop severe intoxication even with a small overdose. With simultaneous use with Metoclopramide may increase the rate of absorption of paracetamol. Prolonged use of barbiturates reduces the effectiveness of paracetamol. Inhibitors of microsomal oxidation reduce the risk of hepatotoxic action. Rimantadine enhances the stimulating effect of caffeine. Cimetidine reduces the clearance of rimantadine by 18%.

Duration of use - no more than 5 days. Do not use in the presence of metastatic tumors. Persons prone to ethanol use should consult a doctor before starting treatment with the drug, since paracetamol may have a damaging effect on the liver.

Influence on the ability to drive vehicles and other mechanisms that require increased concentration of attention.

In a dry place at a temperature not higher than 25 ° C.

Keep out of reach of children.