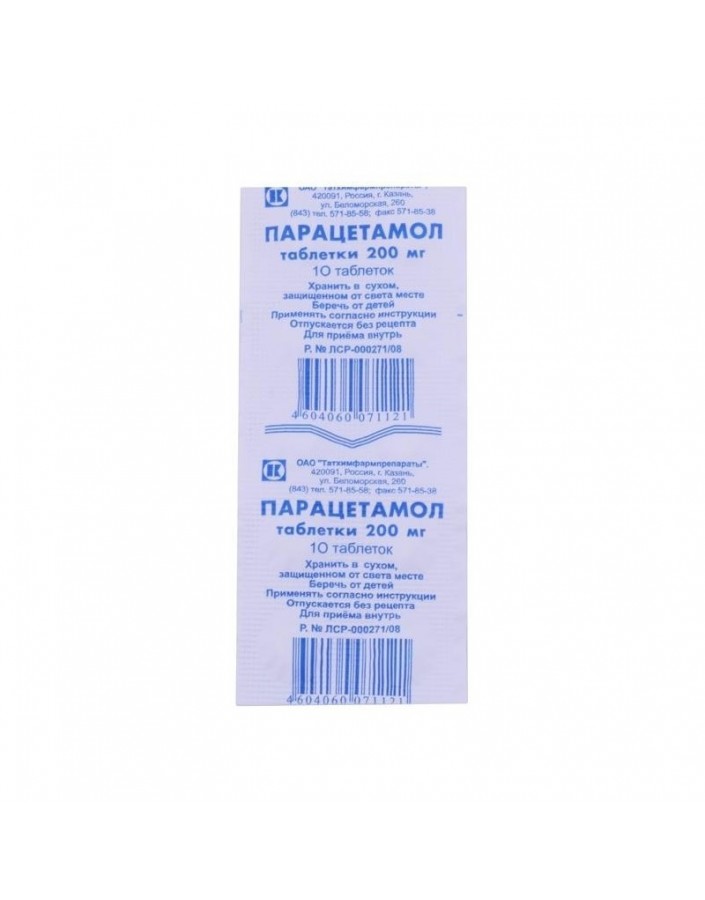 Paracetamol has analgesic and antipyretic effects. Paracetamol blocks cyclooxygenase I and II only in the central nervous system, affecting the centers of pain and thermoregulation (cellular tissue peroxidase neutralizes the effect of paracetamol on cyclooxygenase in inflammatory tissues), which explains the almost complete absence of anti-inflammatory effect. The lack of influence on the synthesis of prostaglandins in peripheral tissues causes the absence of a negative effect on the water-salt metabolism (sodium and water retention) and the gastrointestinal mucosa. The possibility of the formation of methemoglobin is unlikely.

Apply inside with a large amount of liquid 0.5 g-1 g 2-3 times a day at intervals of not less than 4 hours. The maximum single dose for adults and adolescents over 12 years old (body weight more than 40 kg) is 1 g, daily - 4 g.
In patients with impaired liver or kidney function, with Gilbert's syndrome and in elderly patients, the interval between doses of the drug should be at least 8 hours and the daily dose should be reduced.
Children are prescribed at the rate of 10-15 mg / kg of body weight 3-4 times a day. The maximum daily dose for children from 8 to 9 years old (body weight up to 30 kg) is 1.5 g, up to 12 years old (body weight up to 40 kg) is 2 g.
The duration of treatment is not more than 5 days when prescribed as an anesthetic and 3 days as an antipyretic.

Distorts the performance of laboratory tests in the quantitative determination of uric acid in plasma.
In order to avoid toxic damage to the liver, paracetamol should not be combined with the intake of alcoholic beverages, as well as be taken by persons prone to chronic alcohol consumption.
The risk of liver damage increases in patients with alcoholic hepatosis.
With prolonged use of the drug is necessary to control the picture of peripheral blood and the functional state of the liver.

Stimulants of microsomal oxidation in the liver (phenytoin, ethanol, barbiturates, rifampicin, phenylbutazone, tricyclic antidepressants), ethanol, and hepatotoxic drugs increase the production of hydroxylated active metabolites, which leads to the possibility of the development of severe intoxications with minor overdoses. Prolonged use of barbiturates reduces the effectiveness of paracetamol.
Ethanol contributes to the development of acute pancreatitis. Inhibitors of microsomal oxidation (including cimetidine) reduce the risk of hepatotoxic action. Prolonged joint use of paracetamol and other NSAIDs increases the risk of developing "analgesic" nephropathy and renal papillary necrosis, the onset of end-stage renal failure.
The simultaneous long-term administration of paracetamol in high doses and salicylates increases the risk of developing kidney or bladder cancer. The concomitant use of paracetamol in high doses increases the effect of anticoagulants (a decrease in the synthesis of procoagulant factors in the liver).
Diflunisal increases the concentration of paracetamol in the blood plasma by 50% - the risk of developing hepatotoxicity increases.
Reduces the effectiveness of uricosuric drugs.

Symptoms: during the first 24 hours after ingestion - pallor of the skin, nausea, vomiting, anorexia, abdominal pain; violation of glucose metabolism, metabolic acidosis.Symptoms of abnormal liver function may appear 12-48 hours after an overdose. In severe overdose - liver failure with progressive encephalopathy, coma, death; acute renal failure with tubular necrosis (including in the absence of severe damage to the liver); arrhythmia, pancreatitis. Hepatotoxic effect in adults appears when taking 10 g or more.
Treatment: the introduction of SH-group donators and precursors of the synthesis of glutathione - methionine after 8-9 hours after overdose and N-acetylcysteine ​​- after 12 hours on the concentration of paracetamol in the blood, as well as on the time elapsed after its administration.