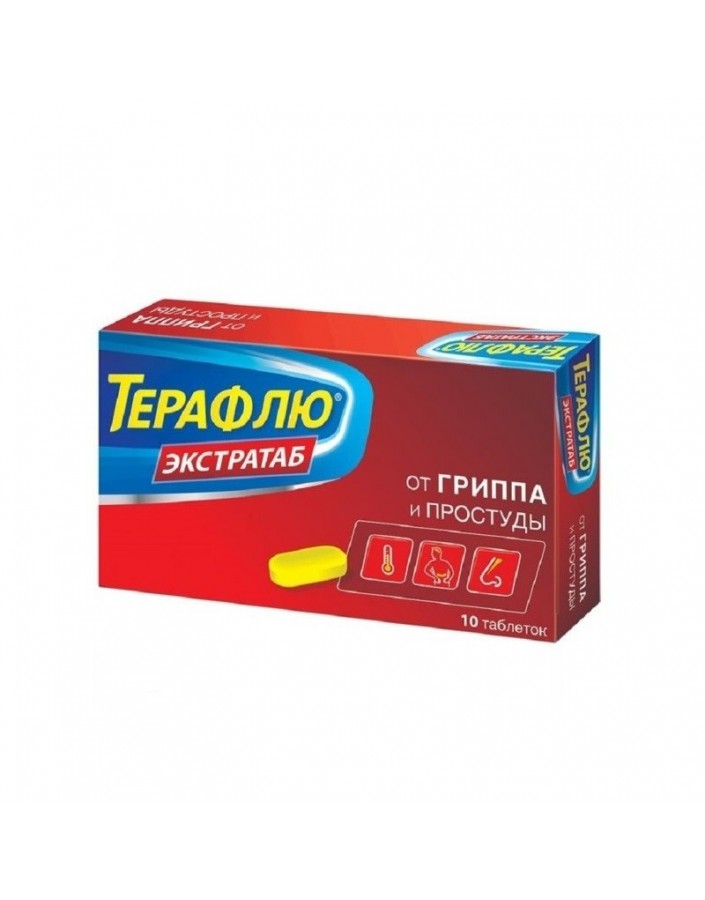 light yellow oblong tablets, film-coated, with beveled edges. On the break, the pill is light yellow.

Combined tool that has antipyretic, anti-inflammatory, anti-edema, analgesic and anti-allergic effect, eliminates the symptoms of "cold".

The action of the drug due to its constituent components.Paracetamol has an antipyretic effect by blocking cyclooxygenase predominantly in the central nervous system, affecting the centers of pain and thermoregulation. Practically does not possess anti-inflammatory action.

Paracetamol does not affect the synthesis of prostaglandins in peripheral tissues, thus not adversely affecting the water-salt metabolism (delayed Na+ and water) and the mucous membrane of the gastrointestinal tract.
Phenylephrine - alpha adrenergic, narrows blood vessels, eliminates swelling and hyperemia of the mucous membrane of the nasal cavity, nasopharynx and paranasal sinuses, reduces exudative manifestations (runny nose).

Paracetamol is rapidly and almost completely absorbed from the gastrointestinal tract. Maximum plasma concentrations are reached 10-60 minutes after ingestion.

Paracetamol is widely distributed in all tissues of the body. It penetrates the placental barrier and is eliminated with breast milk. Binding to plasma proteins is not significant at normal therapeutic concentrations, but increases with increasing concentrations.

Paracetamol is metabolized in the liver primarily in two ways: glucuronidation and sulfation. It is excreted by the kidneys, mainly in the form of conjugates of glucuronide and sulfate.The half-life is from 1 to 3 hours.

In severe impaired renal function (creatinine clearance less than 30 ml / min) the excretion of paracetamol and its metabolites is delayed.

Phenylephrine hydrochloride is absorbed from the gastrointestinal tract and is metabolized by monoamine oxidase during the initial passage through the intestinal wall and in the liver, therefore, when ingested phenylephrine hydrochloride has limited bioavailability. It is excreted by the kidneys almost entirely as a sulfate conjugate. The maximum concentration of the drug in plasma is achieved within 45 minutes - 2 hours, and the half-life of the drug from plasma is 2-3 hours.

Chlorphenamine is relatively slowly absorbed from the gastrointestinal tract, the maximum concentration of chlorphenamine in the blood plasma is reached after 2.5 - 6 hours after taking the drug.

The substance has a low bioavailability of 25 - 50%. About 70% of chlorphenamine in the bloodstream binds to plasma proteins. It is widely distributed in body tissues, including the central nervous system.

Chlorphenamine undergoes significant metabolism during the initial passage. Duration of action is 4-6 hours. Children had a faster and more complete absorption, faster clearance and a shorter half-life.

The half-life is from 2 to 43 hours, even with an average duration of 4-6 hours.Part of chlorphenamine unchanged with metabolites excreted by the kidneys.

You should not take other paracetamol-containing drugs at the same time, as well as other drugs that affect liver function.

It should be taken with caution in patients with alcohol dependence.

Application of Theraflu ®ExtraTab is not recommended during pregnancy and during breastfeeding.

Epidemiological studies during pregnancy showed no adverse effect when using oral paracetamol at the recommended dose. Reproductive studies on the assessment of oral medication showed no signs of malformations or fetotoxicity. Under normal conditions of use, paracetamol can be used throughout pregnancy after assessing the benefit-risk ratio.

There are limited data on the use of phenylephrine in pregnant women. Constriction of uterine vessels and reduced blood flow in the uterus when using phenylephrine can lead to fetal hypoxia. Phenylephrine should be avoided during pregnancy.

Epidemiological data on the use in humans revealed no association between chlorpheniramine and congenital malformations. However, due to the lack of controlled clinical studies, the use of chlorpheniramine maleate should be avoided during pregnancy.

Paracetamol is excreted in breast milk, but in amounts that are not clinically significant. In accordance with the published data, the drug is not contraindicated during the breastfeeding period.

There are no data on the allocation of phenylephrine in breast milk. You should avoid taking this drug during lactation.

No information is available on the use of chlorpheniramine during lactation in humans. It should be avoided by women who are breastfeeding.

Children over 12 years old - 1 pill every 4-6 hours, but not more than 4 pills per day. It is recommended to swallow the pill whole, without chewing, drinking water.

The course of treatment should not exceed 5 days.

If there is no relief of symptoms within 3 days after the start of the drug, you should consult a doctor.

Doses for special categories of patients:

In patients with impaired liver function or Gilbert's syndrome, it is necessary to reduce the dose or increase the interval between doses.

In the case of severe renal failure (creatinine clearance <10 ml / min), the interval between doses should be at least 8 hours.

For elderly patients, dose adjustment is not required.

From the blood and lymphatic system:

From the side of the heart:

From the side of the vessels:

Symptoms of overdose are mainly due to the presence of paracetamol..

In acute overdose, paracetamol can have a hepatotoxic effect and even cause liver necrosis. Paracetamol overdose, including a general high dose level after a long period of therapy, can lead to analgesic nephropathy with irreversible liver failure.Patients should be warned about the inadmissibility of the simultaneous administration of other drugs containing paracetamol.

There is a risk of poisoning, especially in elderly patients and young children, persons with liver disease, in the case of chronic alcoholism, patients with chronic malnutrition and patients receiving inductors of microsomal enzymes.

An overdose of paracetamol can lead to liver failure, encephalopathy, coma and death.

Symptoms of a paracetamol overdose on the first day include pallor, nausea, vomiting, and anorexia. Abdominal pain can be the first sign of liver damage, and it can appear only after 24-48 hours, and sometimes even