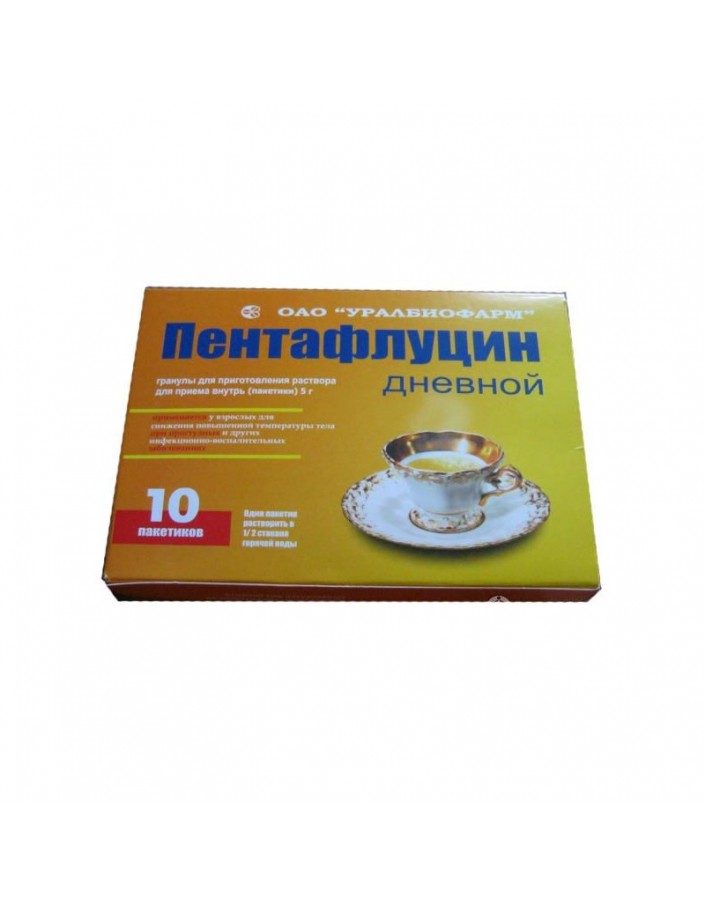 Pentaflucin has antipyretic and anti-inflammatory agent.
Ascorbic acid plays an important role in the regulation of redox processes, carbohydrate metabolism, blood clotting, tissue regeneration, contributes to an increase in body resistance.
Dimedrol has antihistamine, anti-allergic and anti-inflammatory activity, as well as sedative and hypnotic action.
Calcium gluconate is a regulator of Calcium and phosphorus metabolism.
Paracetamol has antipyretic, analgesic effect.
Rutin reduces capillary permeability and fragility, has antioxidant properties.

Pentaflucin is used in adults to reduce fever, colds and other infectious and inflammatory diseases.

One packet of the drug is stirred in a glass of hot water. A slight sediment in the glass is allowed.
Pentaflucin is administered orally after meals, 1 packet 3-4 times a day for 3 to 5 days.

Increased individual sensitivity to the components of the drug. Peptic ulcer and duodenal ulcer, Gastrointestinal bleeding, marked impaired liver or kidney function. Blood diseases with a tendency to hemorrhage.

The drug enhances the action of drugs that reduce blood coagulation and platelet aggregation, as well as side effects of glucocorticoids, sulfonylurea derivatives, Methotrexate, non-narcotic analgesics and nonsteroidal anti-inflammatory drugs.
The combination of the drug with barbiturates, anticonvulsants, rifampicin and alcohol should be avoided.