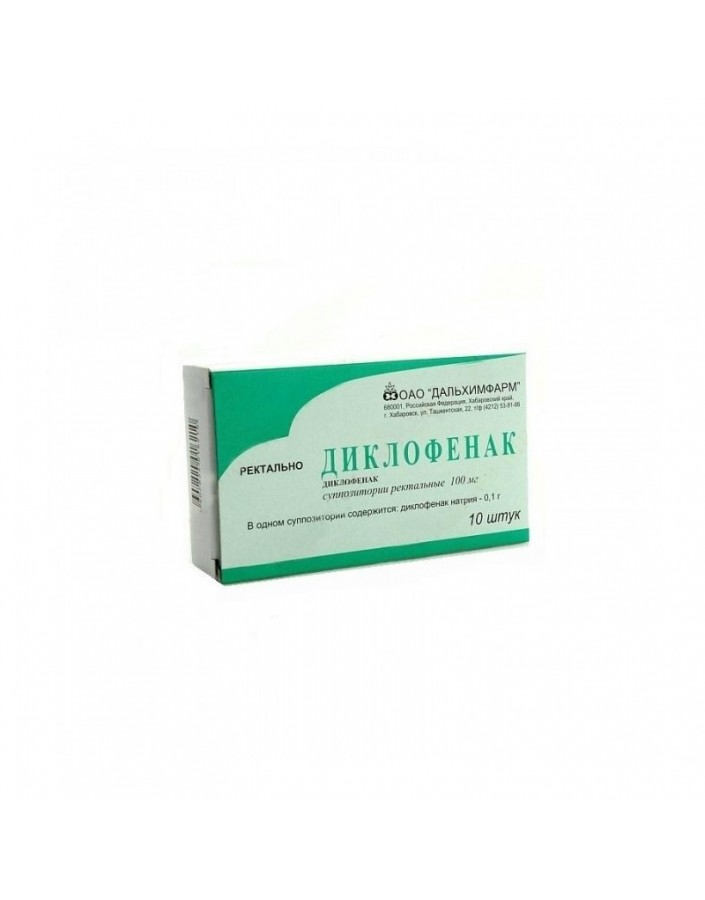 Diclofenac solution for i / m introduction transparent, slightly colored, with a faint smell of benzyl alcohol.
1 ml of solution contains 25 mg of Diclofenac sodium, 1 ampoule (3 ml) - 75 mg;
Excipients: benzyl alcohol, water for injection;
in ampoules of 3 ml, 5 or 10 ampoules in a carton box.

Note: the use of injection solution is indicated if it is necessary to achieve a quick effect, or it is impossible to receive candles.

- Pathological changes in the blood picture of unclear genesis;
- gastric ulcer and duodenal ulcer;
- destructive-inflammatory bowel disease in the acute phase;
- pregnancy;
- the period of lactation (breastfeeding should be abandoned);
- children and adolescents up to 12 years (in / m introduction, supp.);
- children's age up to 6 years (tablets, ointment);
- hypersensitivity to Acetylsalicylic acid or other NSAIDs (including the "aspirin triad");
- Hypersensitivity to diclofenac and other components of the drug;
- inflammation of the rectum - proctitis (suppositories)

Taking Diclofenac is possible only under the strict supervision of a physician after careful evaluation of the benefit / risk ratio. under the following conditions: congenital hematopoietic disorder (induced porphyria); systemic lupus erythematosus and other systemic diseases of connective tissue; the presence of complaints on the function of the gastrointestinal tract, or in case of suspected gastric or duodenal ulcer, as well as erosive and ulcerative lesions (ulcerative colitis, Crohn's disease); in patients with previous kidney disease and / or severe liver dysfunction; with severe hypertension and / or heart failure; in elderly patients; immediately after surgery.

With great care and only under the direct supervision of a physician can Diclofenac be used in patients with bronchial asthma, allergic rhinitis,polyps of the mucous membrane of the nasal cavity, as well as in chronic obstructive respiratory diseases and chronic infections of the respiratory tract due to the risk of an asthma attack, angioedema or urticaria.

Solution for i / m administration
Diclofenac is administered at the beginning of treatment once a / m at a dose of 75 mg (1 ampoule) or maximum 150 mg (2 ampoules) per day only for adults and only in those cases when it is necessary to obtain a particularly rapid therapeutic effect.
Usually, injections are prescribed for 1-5 days.
If it is necessary to continue therapy, they switch to the administration of diclofenac in the form of tablets, capsules, and the use of suppositories.
V / m injection can be combined with the use of the drug orally or rectally, while the maximum daily dose should not exceed 150 mg.

Pills
Adults are recommended to take from 50 to 150 mg of diclofenac per day, divided into 2-3 separate doses.
In the absence of other prescriptions, it is recommended to take 100–150 mg per day as initial therapy, and 75–100 mg divided by 2-3 separate doses for long-term therapy.
Children over 6 years old Diclofenac is prescribed in a dose of 2 mg / kg of body weight, and the daily dose is also divided into several doses.

Diclofenac ointment (gel) on the damaged surface of the skin, open wounds, eyes and mucous membranes should be avoided.
The use of Diclofenac in the form of an ointment is possible only on prescription in the following cases: a history of gastric ulcer and duodenal ulcer; abnormal liver and kidney function; severe violations of the hematopoietic system; bronchial asthma, rhinitis, polyps of the nasal mucosa; allergic reactions in history.
With caution, use the drug simultaneously with other NSAIDs.
Use in pediatrics
If necessary, use the drug in the form of ointment in children under 6 years old required medical supervision.
Influence on ability to driving of the car and control of mechanisms
Due to the fact that the use of the drug in high doses may develop such side effects as dizziness and fatigue, in some cases the ability to drive a car or other moving objects is impaired. These phenomena are intensified while taking alcohol.

With the simultaneous use of the drug Diclofenac with Digoxin,phenytoin or lithium preparations may increase the plasma concentrations of these drugs; with diuretics and antihypertensives - perhaps reducing the action of these drugs; with potassium-sparing diuretics, hyperkalemia may develop; with acetisalicylic acid - a decrease in the concentration of diclofenac in the blood plasma and an increase in the risk of side effects.
Diclofenac may enhance the toxic effects of cyclosporine on the kidneys.
Diclofenc may cause hypo-or hyperglycemia, therefore, when used simultaneously with hypoglycemic agents, it is necessary to control the concentration of glucose in the blood.
When using Methotrexate for 24 hours before or after taking Diclofenac, it is possible to increase the concentration of methotrexate and enhance its toxic effect.
With simultaneous use with anticoagulants requires regular monitoring of blood coagulation.