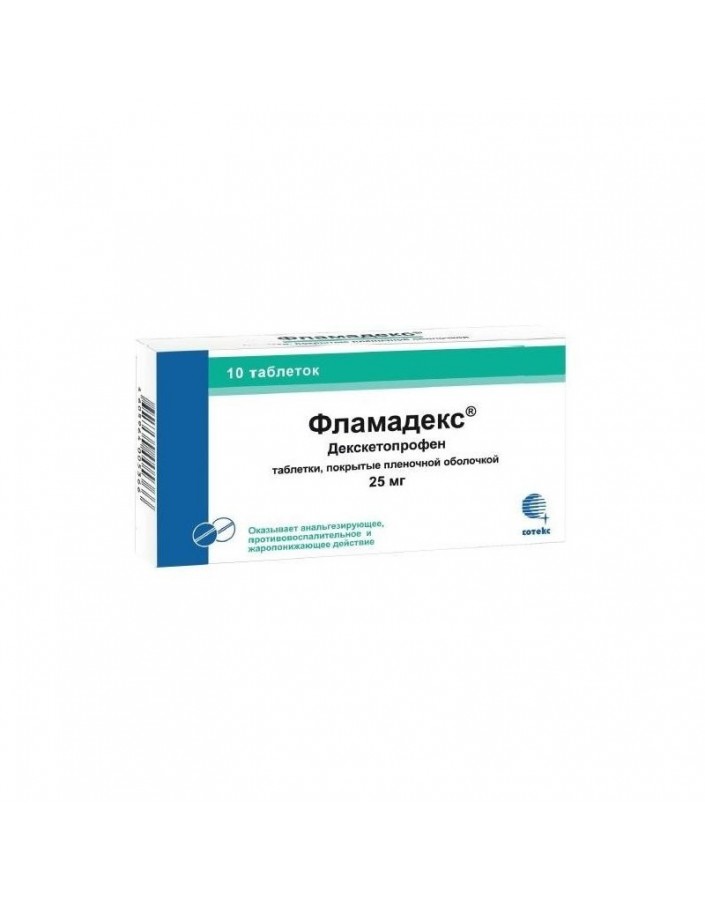 NSAIDs, a derivative of propionic acid. It has an analgesic, anti-inflammatory and antipyretic effect. The mechanism of action is associated with inhibition of prostaglandin synthesis at the COX-1 and COX-2 levels.

When combined with opioid analgesics, dexketoprofen significantly (up to 30-45%) reduces the need for opioids.

After taking the drug inside CmaxDexketoprofen in human serum is reached on average in 30 minutes (15-60 minutes). Simultaneous ingestion slows down the absorption of the drug. The values ​​of AUC after single and repeated doses are similar, which indicates the absence of drug accumulation.

After i / m administration of dexketoprofen Cmaxin serum is reached on average after 20 minutes (10-45 minutes). AUC after a single injection in a dose of 25-50 mg is proportional to the dose, as with the / m, and with a / in the introduction. The corresponding pharmacokinetic parameters are similar after a single and repeated intramuscular or intravenous injection, which indicates the absence of drug accumulation.

Dexketoprofena is characterized by a high level of plasma protein binding - 99%. Average v valuedis less than 0.25 l / kg, half-time is about 0.35 h.

Metabolism of dexketoprofen mainly occurs by conjugation with glucuronic acid, followed by excretion by the kidneys.

In the elderly, there is an increase in the duration of T1/2 (both after a single dose, and after repeated intramuscular injection or intravenous administration), on average, up to 48% and a decrease in the total clearance of the drug.

The maximum daily dose is 75 mg.

Flamadex® not intended for long-term therapy, the course of drug treatment should not exceed 3-5 days.

Recommended Dose foradults: 50 mg every 8-12 hours. If necessary, repeated administration of the drug with a 6-hour interval is possible. The daily dose should not exceed 150 mg.

Flamadex® indicated for short-term use, treatment should be limited to a period of acute symptoms (no more than 2 days).

Dose adjustment forelderly patientsAs a rule, it is not required, however, due to the physiological decline in renal function, it is recommended to reduce the dose of the drug:lung renal dysfunction in elderly patients The total daily dose is 50 mg.

Terms of preparation of the solution for IV infusion

From the reproductive system: rarely, in women, menstrual disorders, in men, dysfunction of the prostate gland.

- Hypersensitivity to dexketoprofen or other NSAIDs or to any of the excipients that make up the drug (including sulfites);

- complete or incomplete combination of bronchial asthma, recurrent nasal polyposis and paranasal sinuses and intolerance to Acetylsalicylic acid or other NSAIDs (including a history of);

- erosive and ulcerative lesions of the gastrointestinal tract and duodenum;

- a history of Gastrointestinal bleeding, other active bleeding (including suspected intracranial bleeding);

- hemophilia and other disorders of blood coagulation;

- children and adolescents up to 18 years of age (there are no clinical data on the efficacy and safety of the use of the drug in pediatric practice).

Flamadex® solution for in / in and in / m administration is contraindicated for neuroaxial (epidural or intrathecal) administration due to the ethanol contained in the preparation.

Use of the drug Flamadex® during pregnancy and lactation is contraindicated.

Havepatients with mild and moderately impaired liver function (5-9 points on the Child-Pugh scale) The total daily dose should be reduced to 50 mg and frequent monitoring of liver function should be performed. Flamadex®should not be prescribed to patients withsevere liver dysfunction.

Dose adjustment forelderly patientsAs a rule, it is not required, however, due to the physiological decline in renal function, it is recommended to reduce the dose of the drug:lung renal dysfunction in elderly patients The total daily dose is 50 mg.

Flamadex® should be used with caution in patients with a history of allergies.

It has been clinically proven that the simultaneous use of dexketoprofen and preparations of low molecular weight Heparin in prophylactic doses in the postoperative period does not change the clotting parameters. However, with simultaneous use of the drug Flamadex® With other drugs that affect blood clotting, careful medical monitoring of the blood clotting system is necessary. Dexketoprofen may cause reversible inhibition of platelet aggregation.

Like other NSAIDs, Flamadex® can lead to increased creatinine concentrations and plasma nitrogen levels. Like other prostaglandin synthesis inhibitors, Flamadex® can have a side effect on the urinary system, which can lead to the development of glomerulonephritis, intestinal nephritis, papillary necrosis, nephrotic syndrome and acute renal failure .

Flamadex® should be used with caution in patients with chronic heart failure I-II functional class by NYHA.