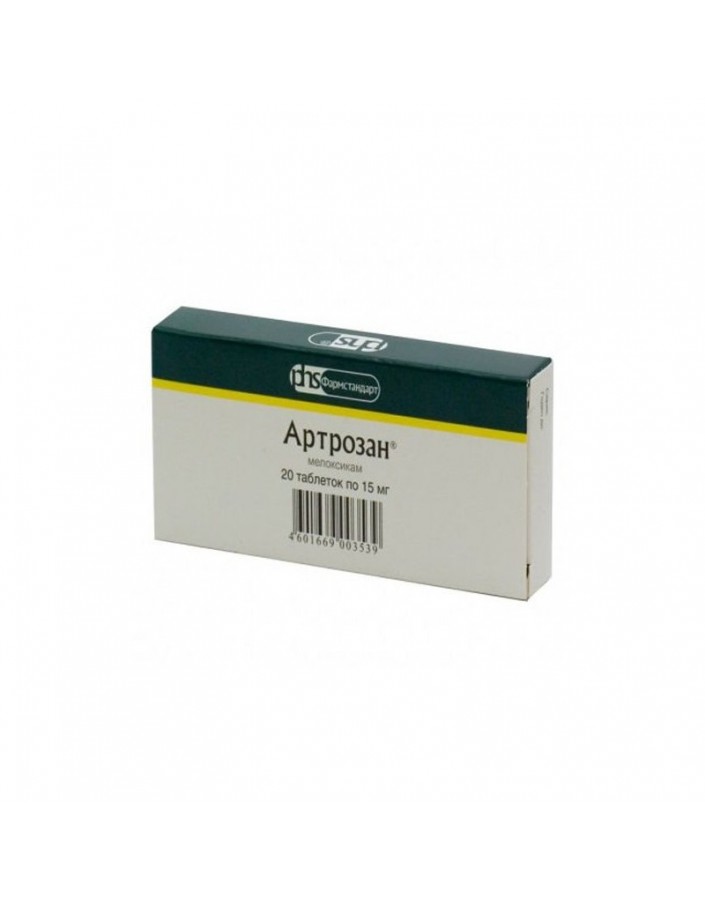 pills from light yellow to yellow color of a flat-cylindrical form with a facet and risky. Minor marbling is allowed.

Artrozan - nonsteroidal anti-inflammatory drug with analgesic, antipyretic and analgesic effects. The anti-inflammatory effect is associated with inhibition of the enzymatic activity of cyclooxygenase-2 (COX-2), which is involved in the biosynthesis of prostaglandins in the area of ​​inflammation. To a lesser extent, meloxicam acts on cyclooxygenase-1 (COX-1), which is involved in the synthesis of prostaglandin, which protects the mucous membrane of the gastrointestinal tract and is involved in the regulation of blood flow in the kidneys.

Hypersensitivity to any component of the drug;
- Aspirin bronchial asthma;
- exacerbation of gastric ulcer and duodenal ulcer;
- severe renal failure (if hemodialysis is not performed);
- severe liver failure;
- children under the age of 15 years;
- pregnancy and lactation.
Carefully the drug should be used in elderly patients, in patients with erosive and ulcerative lesions of the gastrointestinal tract in history.

Symptoms: impairment of consciousness, nausea, vomiting, epigastric pain, gastrointestinal tract, bleeding, acute renal failure, liver failure, respiratory arrest, asystole.
Treatment: there is no specific antidote; With an overdose of the drug should be a gastric lavage, taking activated charcoal (within the next hour), symptomatic therapy. Cholestyramine accelerates the excretion of the drug from the body. Forced diuresis, alkalization of urine, hemodialysis are ineffective due to the high association of the drug with blood proteins.

Care should be taken when using the drug in patients with a history of peptic ulcer or duodenal ulcer, as well as in patients undergoing anticoagulation therapy. These patients have an increased risk of ulcerative erosive diseases of the gastrointestinal tract.
Caution should be exercised and monitor renal function when using the drug in elderly patients, patients with chronic heart failure with symptoms of circulatory failure, in patients with cirrhosis of the liver, as well as in patients with hypovolemia as a result of surgical interventions.
In patients with renal failure, if creatinine clearance is more than 25 ml / min, no adjustment of the dosage regimen is required.
In patients on dialysis, the dosage of the drug should not exceed 7.5 mg / day.
Patients taking both diuretics and meloxicam should take a sufficient amount of fluid.
If during treatment there are allergic reactions (itching, skin rash, urticaria,photo-sesibilization) it is necessary to consult a doctor with a view to deciding whether to stop taking the drug.

In a dry and dark place. Keep out of the reach of children.
Shelf life - 2 years.