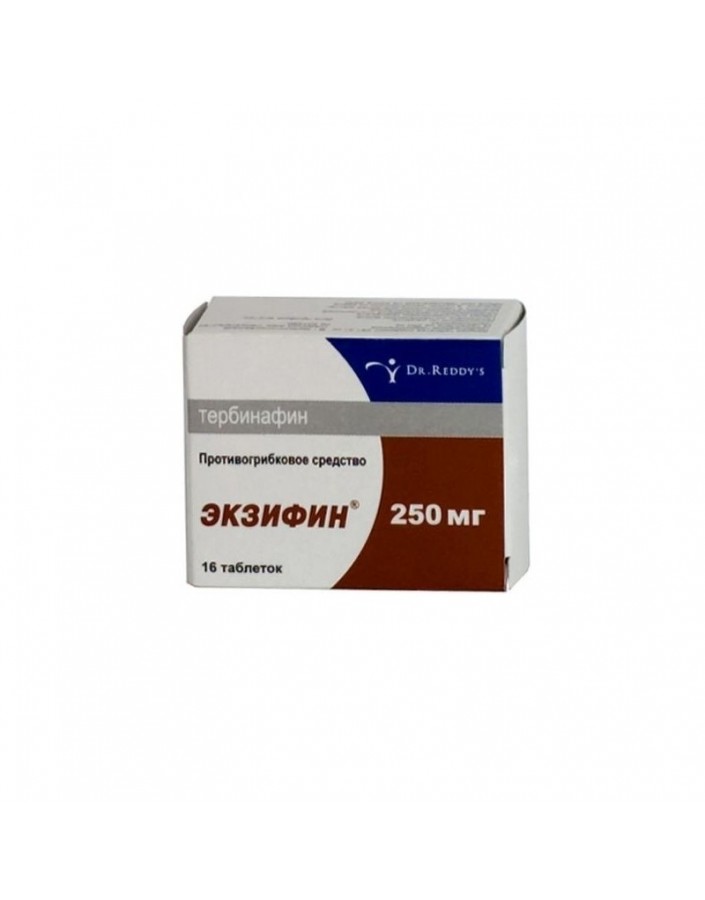 severe, widespread dermatomycosis of the smooth skin of the trunk and extremities, requiring systemic treatment;

candidiasis of the skin and mucous membranes.

yeast infections of the skin, mainly those caused by the Candida genus (for example, Candida albicans), in particular diaper rash;

Hypersensitivity to any component of Exifin;

children's age up to 2 years, because there is not enough data on the use of the drug in children weighing less than 12 kg;

- liver and / or renal failure;

- occlusive vascular diseases of the limbs;

- children's age up to 12 years (lack of sufficient clinical experience).

Exifin tablets: side effects are usually moderate and mild and temporary.

On the part of the digestive system: often - a feeling of a full stomach, dyspepsia, nausea, loss of appetite, abdominal pain, diarrhea; not often - a violation of taste perception, incl. loss of taste, which is restored within a few weeks after cessation of treatment; rarely - cholestasis, jaundice, hepatitis, asymptomatic increase in the level of liver transaminases. Despite the unproven causation of these disorders with the use of terbinafine, in case of development of hepatobiliary dysfunction, treatment with Exifin should be stopped.

From the side of the central nervous system: rarely - paresthesia, hypoesthesia, dizziness; very rarely - depression, anxiety.

On the part of the musculoskeletal system: often - arthralgia, myalgia.

On the part of the hematopoietic system: very rarely - neutropenia, agranulocytosis, thrombocytopenia.

Exifin pills are taken orally. The duration of the course of treatment and the dosage regimen are set individually and depend on the localization of the process and the severity of the disease.

Exifin cream is applied externally. Before applying the cream must be cleaned and dried the affected areas. The cream is applied 1-2 times a day with a thin layer on the affected skin and surrounding areas and lightly rubbed. For infections accompanied by diaper rash (under the mammary glands, in the interdigital spaces, between the buttocks, in the groin area), the places of application of the cream can be covered with gauze, especially at night.