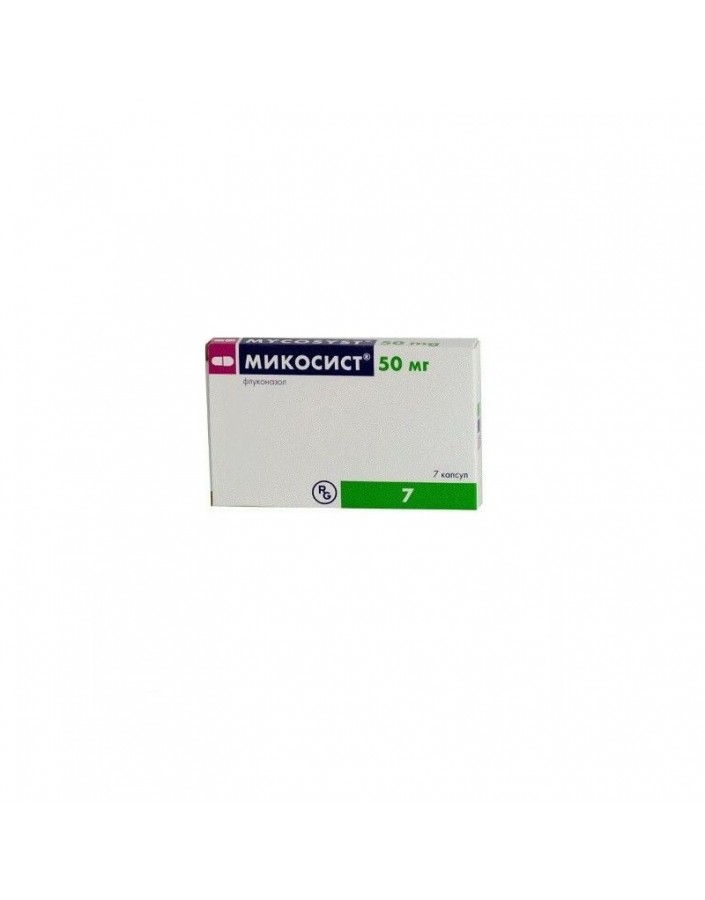 In the blister 7 capsules. In packing 1 blister.

Fluconazole, a representative of the class of triazole antifungal agents, is a potent selective inhibitor of sterol synthesis in the cell of fungi.

Active against pathogens of opportunistic mycoses, incl. caused by:

Fluconazole activity is also shown on models of endemic mycoses, including infections caused by:

- Cryptococcosis, including cryptococcal meningitis and other localizations of this infection (including lungs, skin), both in patients with a normal immune response and in patients with various forms of immunosuppression (including AIDS patients, organ transplantation ); The drug can be used to prevent cryptococcal infection in AIDS patients and in organ transplantation.
- Generalized candidiasis, including candidemia, disseminated candidiasis and other forms of invasive candidal infection (including infections of the peritoneum, endocardium, eyes, respiratory and urinary tract). Treatment may be carried out in patients with malignant neoplasms, patients in intensive care units, patients receiving cytotoxic or immunosuppressive agents, as well as in the presence of other factors predisposing to the development of candidiasis.
- Candidiasis of mucous membranes, incl. oral cavity and pharynx (including atrophic candidiasis of the oral cavity associated with the wearing of dentures), esophagus, non-invasive bronchopulmonary infections, candiduria, candidiasis of the skin; prevention of recurrent oropharyngeal candidiasis in AIDS patients.
- Genital candidiasis: vaginal candidiasis (acute and chronic recurrent), prophylactic use in order to reduce the frequency of recurrences of vaginal candidiasis (3 or more episodes per year); candidal balanitis.
- Prevention of fungal infections in patients with malignant tumors that are predisposed to such infections as a result of cytotoxic Chemotherapy or radiation therapy.
- Mycoses of the skin, including mycoses of the feet, body, inguinal region, pityriasis versicolor, onychomycosis and skin candidiasis.
- Deep endemic mycoses, coccidioidomycosis, paracoccidioidomycosis, sporotrichosis and histoplasmosis in patients with normal immunity.

- Simultaneous use of terfenadine or astemizole and other drugs that extend the QT interval.
- Children's age up to 6 months (for oral administration).
- Hypersensitivity to the drug or similar in structure azole compounds.

The use of the drug Mikosist during pregnancy is impractical, with the exception of severe or life-threatening forms of fungal infections, if the intended benefit to the mother outweighs the possible risk to the fetus.

Fluconazole is found in breast milk in the same concentration as in plasma, so its administration during lactation is not recommended.

- With candidal infections
- With candidemia, disseminated candidiasis and other invasive candidal infections, the dose averages 400 mg on the first day, and then 200 mg / day. With insufficient clinical efficacy, the dose may be increased to 400 mg / day.The duration of therapy depends on the clinical effectiveness.
- With oropharyngeal candidiasis, the drug is prescribed on average 50-100 mg 1 time / day; the duration of therapy is 7-14 days. If necessary, in patients with a pronounced decrease in immunity, treatment may be longer.
- In case of atrophic oral candidiasis associated with the wearing of dentures, the drug is prescribed in an average dose of 50 mg 1 time / day for 14 days in combination with local antiseptic agents for the treatment of the prosthesis.
- For other candidal infections of the mucous membranes (except for genital candidiasis), for example, esophagitis, non-invasive bronchopulmonary lesions, candiduria, candidiasis of the skin and mucous membranes, the effective dose is on average 50-100 mg / day for a duration of treatment of 14-30 days.
- For the prevention of recurrence of oropharyngeal candidiasis in AIDS patients, after completing the full course of primary therapy, fluconazole may be prescribed 150 mg 1 time per week.
- In vaginal candidiasis, fluconazole is taken once orally at a dose of 150 mg. To reduce the frequency of recurrences of vaginal candidiasis, the drug can be used at a dose of 150 mg 1 time / month. The duration of therapy is determined individually; it varies from 4 to 12 months. Some patients may need more frequent use.
- When balanitis caused by Candida, fluconazole is administered once at a dose of 150 mg orally.
- For the prevention of candidiasis, the recommended dose of fluconazole is 50-400 mg 1 time / day, depending on the degree of risk of developing a fungal infection.If there is a high risk of generalized infection, for example, in patients with expected severe or prolonged neutropenia, the recommended dose is 400 mg 1 time / day. Fluconazole is prescribed a few days before the expected appearance of neutropenia; after an increase in the number of neutrophils of more than 1000 / μl, the treatment is continued for another 7 days.

- Use in children In children, as with similar infections in adults, the duration of treatment depends on the clinical and mycological effect. In children, the drug should not be used in a daily dose in excess of that in adults. The drug is used daily 1 time / day.
- For the treatment of generalized candidiasis and cryptococcal infection, the recommended dose is 6-12 mg / kg / day, depending on the severity of the disease.
- For the prevention of fungal infections in children with reduced immunity, in whom the risk of developing an infection is associated with neutropenia, developing as a result of cytotoxic chemotherapy or radiation therapy, the drug is prescribed at 3-12 mg / kg / day, depending on the severity and duration of preservation of induced neutropenia.
- In case of candidiasis of the mucous membranes, the recommended dose of fluconazole is 3 mg / kg / day. On the first day, a loading dose of 6 mg / kg can be given in order to more quickly achieve constant equilibrium concentrations.

- Use in violation of renal function. Patients with renal insufficiency (creatinine clearance (CK) <50 ml / min) require correction of the dosage regimen. Fluconazole is excreted mainly in the urine unchanged. When taken once a dose change is not required. When reappointment to patients with impaired renal function, you should enter the loading dose from 50 mg to 400 mg. When QA> 50 ml / min, the average recommended dose of the drug is used; with QA from 11 to 50 ml / min, a dose of 50% of the recommended dose is applied. Patients who are regularly on hemodialysis, a single dose of the drug is administered after each hemodialysis session.

For ease of dosing, you can use the drug Mycosyst caps. 150 mg pack. 2 Gideon Richter A.O.

AIDS patients are more likely to develop severe skin reactions with the use of many drugs. When a rash appears to be associated with fluconazole in a patient receiving treatment for a superficial fungal infection, the drug should be discontinued. When a rash appears in patients with invasive / systemic fungal infections, they should be carefully monitored and fluconazole should be canceled when there is a bullous lesion or erythema multiforme.

Care must be taken with simultaneous use of fluconazole with cisapride, astemizole, rifabutin, tacrolimus, or other drugs metabolized by the cytochrome P 450 system.

- Use in disorders of liver function. In rare cases, the use of fluconazole was accompanied by toxic changes in the liver, including fatal, mainly in patients with serious concomitant diseases. There is no marked dependence of the incidence of hepatotoxic effects of fluconazole on the total daily dose, duration of therapy, sex and age of the patient. The hepatotoxic effect of fluconazole is usually reversible; his symptoms disappeared after cessation of therapy. If clinical signs of liver damage appear that may be associated with fluconazole, the drug should be withdrawn.

- Use in renal dysfunction Patients with renal insufficiency (creatinine clearance (CK) <50 ml / min) require correction of the dosing regimen. Fluconazole is excreted mainly in the urine unchanged. When taken once a dose change is not required. When reappointment to patients with impaired renal function, you should enter the loading dose from 50 mg to 400 mg. When QA> 50 ml / min, the average recommended dose of the drug is used; with QA from 11 to 50 ml / min, a dose of 50% of the recommended dose is applied. Patients who are regularly on hemodialysis, a single dose of the drug is administered after each hemodialysis session.

When using fluconazole with Warfarin , an increase in prothrombin time was noted by 12%. In this regard, it is recommended to control the prothrombin time in patients receiving Mikosist in combination with coumarin anticoagulants.

The simultaneous use of fluconazole and phenytoin may be accompanied by an increase in the concentration of phenytoin in a clinically significant degree. If the combined use of two drugs is required, monitoring of the level of phenytoin and the selection of its dose to ensure therapeutic serum concentrations are necessary.

Patients who receive theophylline in high doses, or who are likely to develop theophylline intoxication, should be monitored for the early detection of symptoms of an overdose of theophylline, becausesimultaneous reception of fluconazole leads to a decrease in the average rate of clearance of theophylline from plasma.

With the simultaneous use of fluconazole and cisapride, cases of adverse reactions to the heart are described, including paroxysmal ventricular tachycardia (arrhythmia of the "pirouette" type).

With simultaneous use of zidovudine and fluconazole, there is an increase in plasma zidovudine concentration, which is caused by a decrease in the conversion of the latter to the main metabolite, therefore, an increase in adverse reactions should be expected.

- Symptoms: hallucinations, paranoid behavior.
- Treatment: gastric lavage and symptomatic therapy is recommended. Since fluconazole is excreted in the urine, forced diuresis increases its excretion. Hemodialysis for 3 hours reduces plasma concentration of fluconazole by 50%.