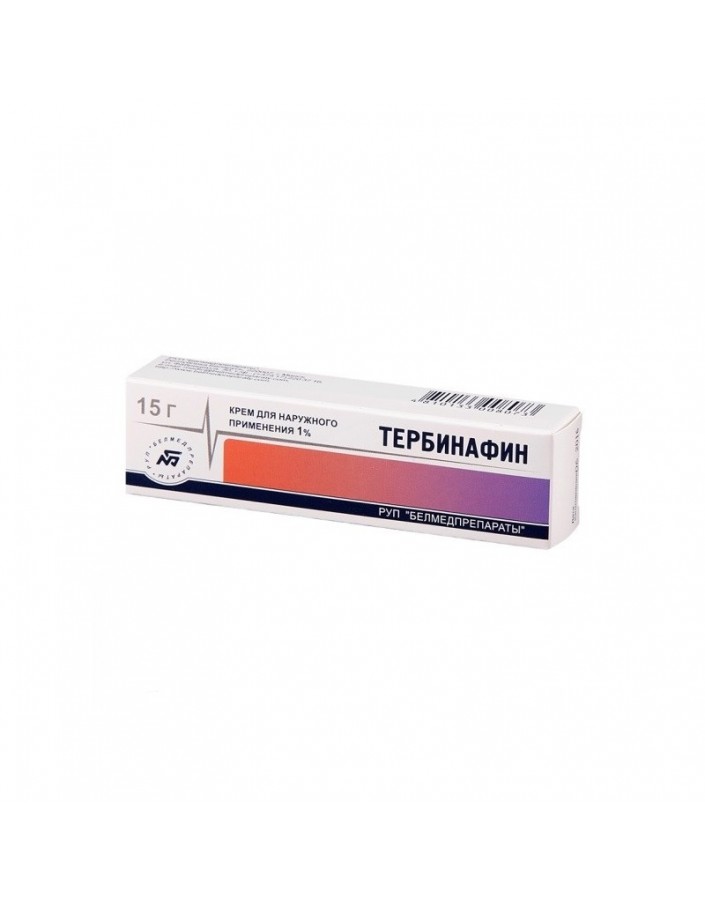 The active substance is Terbinafine (in terms of 100% substance) 1 g,

It has an effect on dermatophytes, yeast-like and mold fungi. At low concentrations has a fungicidal activity against dermatophytes (Trychophyton rubrum, Trychophyton mentagrophytes, Trychophyton verrucosum, Trychophyton violaceum, Trychophyton tonsurans, Microsporum canis, Epidermophyton floccosum), fungi (including Aspergillus, Cladosporium, Scopulariopsis brevicaulis). When applied topically, terbinafine is also active against Pityrosporum orbiculare. The effect on yeast fungi of the genus Candida can be fungicidal or fungistatic depending on the type of fungus.

Terbinafine, unlike azole derivatives, slightly limits the function of cytochrome P450 and the metabolism of steroid hormones or other drugs.

When applied externally, the drug quickly penetrates the dermal layer of the skin and accumulates in the stratum corneum, nails and hair. With a single application of 100 μl of cream on the surface of the skin with an area of ​​30 cm2, 3.5-5% of the drug dose is detected in the urine, therefore the systemic effect is minimal. When applied topically, the potential for the drug to enter breast milk is not excluded.

Method of application and dosing regimen

The cream is applied with a thin layer, slightly rubbing, on the affected skin, previously cleaned and dried, as well as on the surrounding affected areas 1-2 times a day.

With infections accompanied by diaper rash (under the mammary gland, in the interdigital spaces, between the buttocks, in the groin area), the places of application of the cream can be covered with a gauze bandage.

Usually, the average duration of treatment for ringworm of the trunk, legs, feet is 1 week, for candidiasis of the skin - 1-2 weeks, for multi-colored lichen - 2 weeks.

Irregular use of the drug and premature discontinuation of treatment lead to a relapse of the disease.

When applying the cream should follow the rules of personal hygiene to prevent re-infection through underwear or shoes. In the process and at the end of treatment, it is necessary to carry out antifungal treatment of shoes, socks, and linen.

Allergic skin reactions; burning sensation, redness and itching of the skin at the site of application

Hypersensitivity to the components of the drug, pregnancy, lactation (breastfeeding for the period of treatment should be stopped).

Terbinafine Cream is for external use only.

Avoid contact with the drug on the mucous membranes of the eyes, nose, mouth. If the cream gets into your eyes, you should rinse them with plenty of water and, in case of persistent irritation, you should consult a doctor.

Drug interaction of terbinafine in the form of a cream is not described.

Cases of drug overdose for topical use have not been reported.