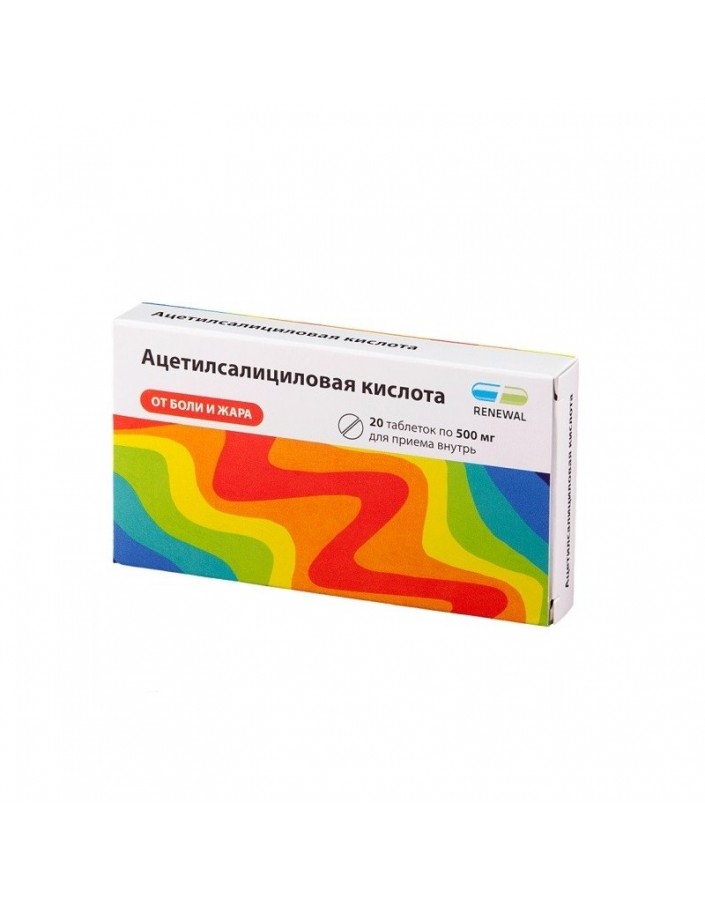 NSAIDs. Acetylsalicylic acid has anti-inflammatory, analgesic and antipyretic effects, and also inhibits platelet aggregation. The mechanism of action is associated with inhibition of the activity of COX - the main enzyme in the metabolism of arachidonic acid, which is a precursor of prostaglandins, which play a major role in the pathogenesis of inflammation, pain and fever. The decrease in the content of prostaglandins (mainly E1) in the center of thermoregulation leads to a decrease in body temperature due to the expansion of blood vessels of the skin and an increase in sweating. The analgesic effect is due to both central and peripheral effects. Reduces aggregation, platelet adhesion and thrombus formation by suppressing the synthesis of thromboxane A2 in platelets.

Erosive and ulcerative gastrointestinal lesions in the acute phase, Gastrointestinal bleeding, "aspirin triad", a history indication urticaria, rhinitis, caused by the intake of Aspirin and other NSAIDs, hemophilia, hemorrhagic diathesis, hypoprothrombinemia, dissecting aortic aneurysm, portal hypertension, vitamin K deficiency, liver and / or kidney failure, deficiency of glucose-6-phosphate dehydrogenase, Reye’s syndrome, children’s age (up to 15 years old - the risk of Reye’s syndrome in children with hyperthermia in the presence of viral diseases), I and III trimesters of pregnancy, lactation, hypersensitivity to acetylsalicylic acid and other salicylates.

Acetylsalicylic acid is contraindicated for use in I and III trimesters of pregnancy. In the II trimester of pregnancy a one-time admission is possible according to strict indications. It has a teratogenic effect: when applied in the first trimester, it leads to the development of upper palate splitting, in the third trimester it causes inhibition of labor activity (inhibition of prostaglandin synthesis), premature closure of the arterial duct in the fetus, hyperplasia of the pulmonary vessels and hypertension in the pulmonary circulation. Acetylsalicylic acid is excreted in breast milk, which increases the risk of bleeding in a child due to dysfunction of platelets, so you should not use acetylsalicylic acid in the mother during lactation.

Dosing regimen individual.For adults, a single dose of acetylsalicylic acid varies from 40 mg to 1 g, daily - from 150 mg to 8 g; frequency of use - 2-6 times / day. Side effects

On the part of the digestive system: nausea, vomiting, anorexia, epigastric pain, diarrhea; rarely - the occurrence of erosive and ulcerative lesions, bleeding from the gastrointestinal tract, abnormal liver function.

On the part of the urinary system: rarely - impaired renal function; with prolonged use - acute renal failure, nephrotic syndrome.

It is used with caution in patients with diseases of the liver and kidneys, with bronchial asthma, erosive and ulcerative lesions and bleeding from the gastrointestinal tract in history, with increased bleeding or while carrying out anticoagulant therapy, decompensated chronic heart failure.Acetylsalicylic acid even in small doses reduces the excretion of uric acid from the body, which can cause an acute attack of gout in susceptible patients. When conducting long-term therapy and / or the use of acetylsalicylic acid in high doses requires the supervision of a physician and regular monitoring of hemoglobin levels.

With the simultaneous use of antacids containing Magnesium and / or aluminum hydroxide, slow down and reduce the absorption of acetylsalicylic acid.

With the simultaneous use of Calcium channel blockers, agents that limit calcium intake or increase the excretion of calcium from the body, the risk of bleeding increases.

With simultaneous use with SCS increases the risk of ulcerogenic action and the occurrence of gastrointestinal bleeding.

With simultaneous use decreases the effectiveness of diuretics (spironolactone, furosemide).

With the simultaneous use of other NSAIDs increases the risk of side effects. Acetylsalicylic acid can reduce plasma concentrations of Indomethacin, Piroxicam.