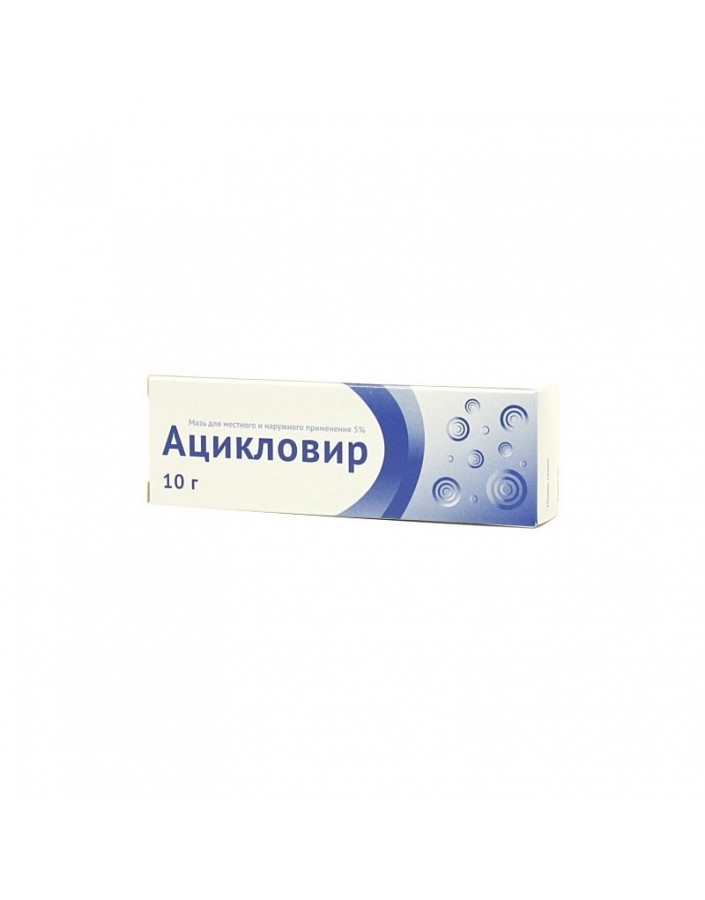 In an aluminum tube 10 g ointment. In a cardboard bundle 1 tube.

Acyclovir is an antiviral drug from the group of synthetic analogs of acyclic purine nucleoside-deoxyguanidine, which is a component of DNA.
Acyclovir has high specificity in relation to: Herpes simplex type 1 and 2; varicella-zoster virus (Varicella zoster) 4 Epstein-Barr virus. Moderately active against: the causative agent of cytomegalovirus infection.
Acyclovir penetrates directly into virus-infected cells. Cells infected with the virus produce viral thymidine kinase, which phosphorylates acyclovir to acyclovir triphosphate. The latter interacts with viral DNA polymerase, which is synthesized for new viruses. Thus, a “defective” viral DNA is formed, which leads to the suppression of the replication of new generations of viruses.

Adequate and controlled clinical studies of the safety of the drug during pregnancy have not been conducted. Use during pregnancy is possible only when the intended benefit to the mother outweighs the potential risk to the fetus. During the period of treatment, it is necessary to resolve the issue of discontinuing breastfeeding.

Outwardly. The ointment is applied to the affected areas 4-6 times a day (as soon as possible after the start of infection). Ointment is applied either with a cotton swab or with clean hands in order to accumulate additional infection of the affected areas. Therapy should be continued until the crust forms on the vesicles, or until they completely heal. The duration of treatment is at least 5 days, maximum 10 days.

Ointment should not be applied to the mucous membranes of the mouth, eyes, nose and vagina. The effectiveness of treatment will be the higher, the earlier it is started (at the first signs of infection). To implement the therapeutic effect of acyclovir, the state of the body's immune system is significant.Patients with reduced immunity (with HIV / AIDS or after bone marrow transplantation) against the background of topical application of acyclovir ointment should be prescribed systemic administration of the drug, as well as in the case of severe and recurrent herpes infection. Acyclovir does not prevent the transmission of herpes through sexual contact, therefore during the treatment period it is necessary to refrain from sexual intercourse, even in the absence of clinical manifestations.

The increased effect is noted with the simultaneous appointment of an immunostimulant.

Store at a temperature not higher than 25ºС.