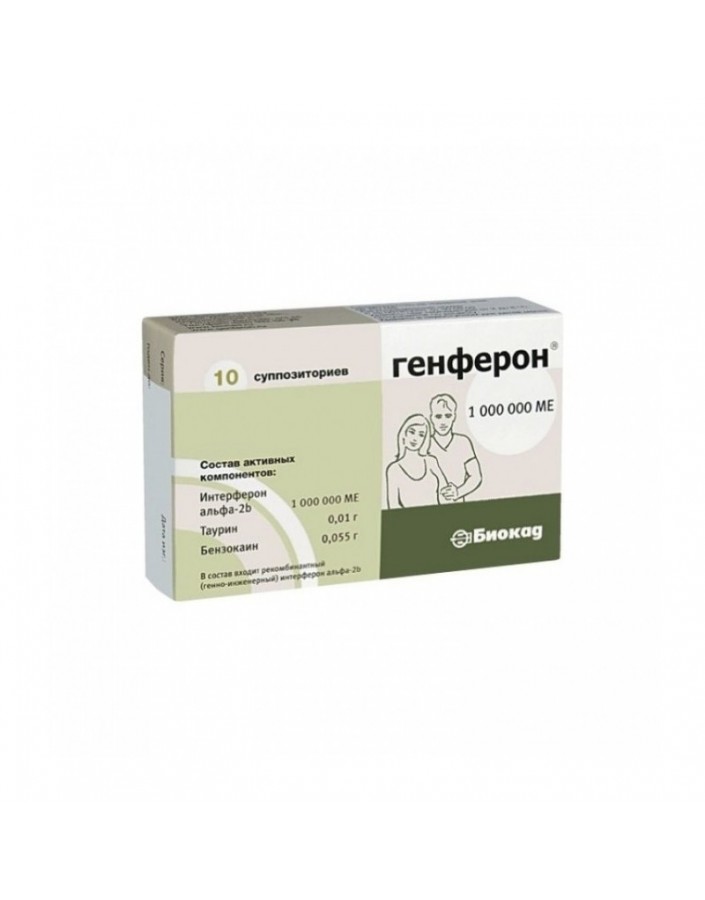 Genferon is a combined drug whose effect is due to its constituent components. It has a local and systemic effect.
Interferon alpha-2 has antiviral, antibacterial and immunomodulatory effects. Under the influence of interferon alpha-2, the activity of natural killer cells, T-helpers, phagocytes, as well as the intensity of B-lymphocyte differentiation, increases in the body. The activation of leukocytes contained in all layers of the mucous membrane ensures their active participation in the elimination of the primary pathological foci and ensures the restoration of production of secretory immunoglobulin A.
Interferon alfa-2 also directly inhibits the replication and transcription of chlamydia viruses.
Taurine, which is part of the drug, has regenerating, reparative, membrane-and hepatoprotective, antioxidant, anti-inflammatory properties.
Anesthesin is a local anesthetic.Reduces the permeability of the cell membrane to sodium ions, displaces Calcium ions from receptors located on the inner surface of the membrane, blocks the conduction of nerve impulses. It prevents the appearance of pain impulses in the endings of the sensory nerves and their passage through the nerve fibers.

Individual intolerance to interferon and other substances that make up the drug.

Genferon candles can be used both vaginally and rectally. The route of administration, dosage and duration of the course depend on the age, specific clinical situation and are determined by the attending physician.

In infectious and inflammatory diseases of the urogenital tract in women.
On 1 suppository (250000 IU or 500000 IU, depending on the severity of the disease) vaginally 2 times a day every day for 10 days. With prolonged forms 3 times a week every other day, 1 suppository for 1-3 months.

In case of a pronounced infectious and inflammatory process in the vagina, it is possible to use 1 candle 500,000 IU intravaginally in the morning and 1 candle 1,000,000 IU rectally overnight simultaneously with the introduction of a candle containing antibacterial / fungicidal agents into the vagina.

To normalize the indices of local immunity in the treatment of infectious and inflammatory diseases of the urogenital tract in women with a gestational age of 13-40 weeks, one suppository of 250,000 IU is used vaginally, 2 times a day, every day for 10 days.

May be used in the second half of pregnancy, if the benefits of the therapy outweigh the possible risk to the fetus.

Allergic reactions, namely skin rash and itching.These phenomena are reversible and disappear after 72 hours after stopping the introduction or reduction of the dose.
There may also be phenomena occurring with the use of all types of interferon alfa-2, such as chills, fever, fatigue, loss of appetite, muscle and headaches, pain in the joints, sweating, and leuko- and thrombocytopenia, but more often they are found with a dose of more than 10 million IU daily.

GENFERON is most effective in combination with drugs (including antibiotics and other antimicrobials) used to treat urogenital diseases. It is recommended to simultaneously use Vitamins E and C, enhancing the effect of interferon. Non-narcotic analgesics and anticholinesterase drugs enhance the action of anesthesin. Anesthesin reduces the antibacterial activity of sulfonamides.