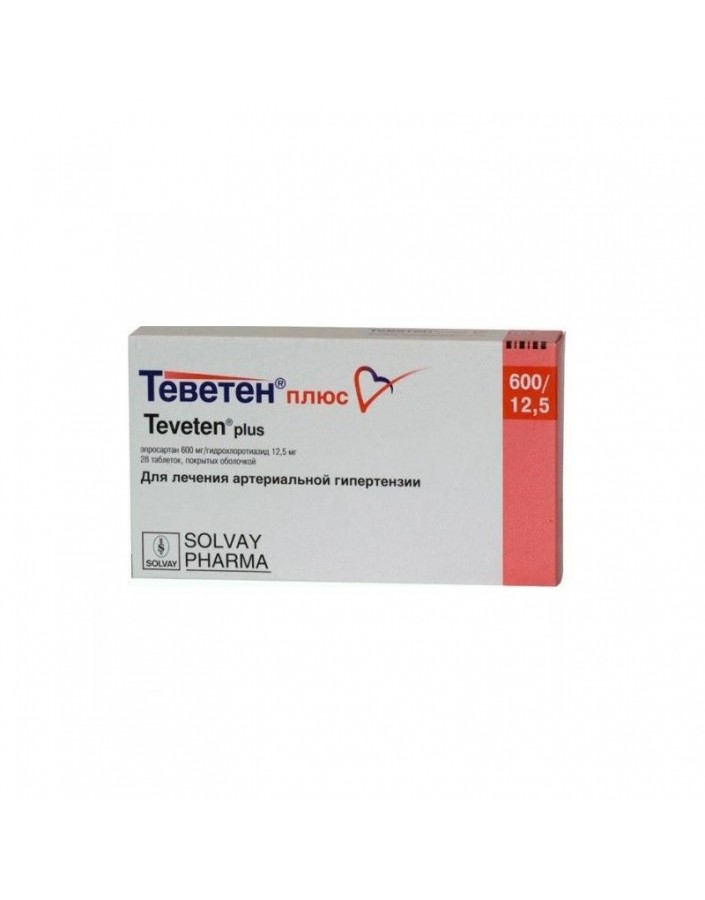 Eprosartan, an antagonist of angiotensin II receptors, selectively acts on AT 1 receptors located in the vessels, heart, kidneys and adrenal cortex, forms a strong connection with them, followed by slow dissociation. It prevents the development or weakens the effects of angiotensin II, inhibits the activity of the renin-angiotensin system. It has a vasodilating, hypotensive and mediated diuretic effect.Reduces arterial vasoconstriction, round neck, pressure in the pulmonary circulation, reabsorption of water and sodium in the proximal segment of the renal tubules, aldosterone secretion. With prolonged use inhibits the proliferative effect of angiotensin II on the cells of vascular smooth muscle and myocardium. A persistent antihypertensive effect persists for 24 hours without the development of orthostatic hypotension and reflex tachycardia in response to the first dose. It has a nephroprotective effect, reducing the excretion of albumin, while maintaining renal autoregulation, regardless of the degree of renal failure. It has no effect on lipid, carbohydrate and purine metabolism. When discontinuing treatment does not cause withdrawal syndrome. Eprosartan does not enhance the effects associated with bradykinin and mediated by ACE, such as cough.

Hydrochlorothiazide is a thiazide diuretic. Thiazides act on the mechanisms of electrolyte reabsorption in the renal tubule, increasing the amount of excretion of fluid, sodium ions and chlorine. Due to the diuretic action of hydrochlorothiazide, plasma volume decreases, renin activity in plasma increases, aldosterone secretion increases, which causes an increase in potassium and bicarbonate losses in urine and a decrease in serum potassium concentration. The mechanism of the hypotensive action of hydrochlorothiazide is a combined diuretic and vascular effects.In patients with elevated systolic blood pressure, eprosartan provides a statistically significant decrease. The addition of 12.5 mg of hydrochlorothiazide to a single daily dose (600 mg) of eprosartan provided an additional statistically significant reduction in systolic blood pressure compared with the daily administration of eprosartan alone. The combined administration of eprosartan with hydrochlorothiazide reduces the potassium loss associated with the diuretic effect. The onset of diuresis takes place within the first 2 hours, and the maximum effect after 4 hours. The maximum hypotensive effect develops, as a rule, after 2-3 weeks of treatment.

Renal failure (creatinine clearance (CC) less than 30 ml / min).
- Pregnancy.
- Lactation period.
- Children and adolescents under 18 years of age (efficacy and safety have not been established).
- Hypersensitivity to drug components and sulfonamides.

With caution should use the drug for:

Tevet Plus is contraindicated for use during pregnancy and lactation.

Assign inside on 1 tab. / Day in the morning. The drug is taken regardless of the meal.

Elderly patients, patients with mild and moderate liver dysfunction, as well as patients with impaired renal function (creatinine clearance (KK) of more than 30 ml / min) do not require special dose adjustment of Tevetin Plus.

The overall incidence of side effects reported in patients taking eprosartan is comparable to that taken with placebo. These effects, as a rule, were mild and short-lived, therefore, cessation of treatment was required only in 4.1% of patients who received eprosartan during placebo-controlled clinical trials (6.5% in the placebo group).

Hydrochlorothiazide did not increase the incidence of side effects.

From the side of the central nervous system: Rarely - headache, dizziness, weakness.

For many years of experience with the use of hydrochlorothiazide in clinical practice, the following side effects were recorded:

Contraindicated in renal failure (CC less than 30 ml / min). In patients with impaired renal function (creatinine clearance (CC) of more than 30 ml / min), a special dose adjustment of Tevet Plus is not required.

When treating patients with impaired renal function,vascular tone and renal function, which mainly depend on the activity of the renin-angiotensin-aldosterone system (RAAS) (for example, in patients with severe heart failure of the III-IV functional class according to the NYHA classification, for bilateral renal artery stenosis or arterial stenosis of a single kidney) careful monitoring of kidney function. If there is a deterioration in kidney function during the course of treatment, treatment should be reviewed.

In patients with impaired renal function, azotemia associated with the use of hydrochlorothiazide may occur.

Hydrochlorothiazide should be used with caution in patients with moderate or severe impaired liver function. Currently, there is no clinical experience with Teveten Plus in patients with severe liver damage.

Hydrochlorothiazide may reduce glucose tolerance, which may require dose adjustment of hypoglycemic agents in the treatment of diabetes. During the course of treatment with Tevetom Plus, latent diabetes can occur.

At a dose of 12.5 mg hydrochlorothiazide, only minor metabolic or endocrine effects have been observed to date as part of Tevet Plus Plus.

Hydrochlorothiazide can cause hypokalemia, hyponatremia, hypercalcemia, hypomagnesemia, and hypochloraemic alkalosis. For all patients receiving diuretics, it is necessary to provide for the periodic determination of serum electrolytes.

Precautions should be prescribed potassium-sparing diuretics, potassium preparations at the same time as Tevetin Plus.

With a decrease in BCC, dehydration or reduction of electrolytes (for example, during treatment with diuretics in high doses, repeated vomiting, prolonged diarrhea, salt-free and hypo-salt diets) taking the drug can cause a sharp decrease in blood pressure (symptomatic hypotension). Before the appointment of Teveten Plus, such violations should be eliminated by correcting the concentration of sodium in the blood and the deficit of BCC.

Influence on the ability to drive vehicles and control mechanisms: Based on the pharmacodynamic properties of eprosartan and hydrochlorothiazide, Teveten Plus should not affect the ability to drive and use machines and mechanisms. During the period of treatment of hypertension, care must be taken when driving vehicles and engaging in potentially hazardous activities that require increased concentration and psychomotor speed, due to the fact that dizziness and weakness may occur.

When used in conjunction with oral hypoglycemic agents, it is necessary to adjust their dose, because hydrochlorothiazide may decrease glucose tolerance.

NSAIDs can reduce the diuretic and hypotensive effect of Teveten Plus.

By lowering potassium, hydrochlorothiazide may enhance the action of cardiac glycosides and some antiarrhythmic drugs.

Hydrochlorothiazide increases the risk of hypokalemia when it is prescribed together with drugs that cause the body to lose potassium, for example, diuretics that have a potassium uretic effect, laxatives, GCS and ACTH.

Data on overdose is currently missing.

Symptoms: an excessive decrease in blood pressure, dehydration and electrolyte imbalance (hypokalemia, hypochloremia, hyponatremia), manifested in the form of nausea and drowsiness.
Treatment: Depending on the time elapsed after a meal, measures taken should include the stimulation of vomiting, gastric lavage and / or ingestion of Activated carbon. With a sharp decrease in blood pressure is recommended to lay the patient on his back, legs, lift,if necessary, enter plasma-substituting liquids. Symptomatic and supportive therapy is recommended for dehydration and impaired water-salt balance. Hemodialysis is not effective.

The drug should be stored in a dry place at a temperature not higher than 25 ° C.