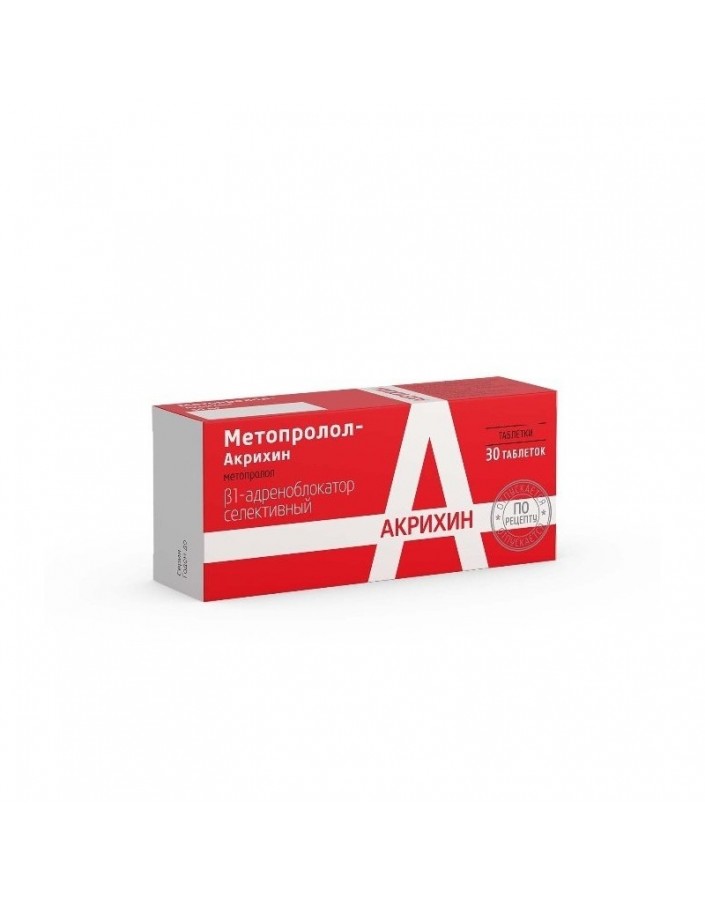 Tablets, film coated, round, biconvex. pills with dosages of 25 mg and 100 mg yellowish-brown. pills with a dosage of 50 mg from light green to green. On a break pill of white with a grayish or creamy shade of color.
Pharmacotherapeutic group:
beta1-blocker selective.

Pharmacodynamics
Cardioselective beta1-adrenoblocker. It has no membrane stabilizing effect and does not possess intrinsic sympathomimetic activity. It has antihypertensive, antianginal and antiarrhythmic effects.
By blocking beta1-adrenoreceptors of the heart in low doses, it reduces the catecholamine-stimulated formation of cyclic adenosine monophosphate (cAMP) from adenosine triphosphate (ATP), reduces the intracellular current of Calcium ions, has a negative chrono, dromo, batmo and inotropic effect (decreases heart rate) ), inhibits conductivity and excitability, reduces myocardial contractility).
General peripheral vascular resistance (OPSS) at the beginning of beta-blockers (in the first 24 hours after oral administration) increases (as a result of a reciprocal increase in the activity of alpha-adrenergic receptors and the removal of beta2-adrenoreceptor stimulation), which after 1-3 days returns to its original, and with prolonged appointment decreases.
The antihypertensive effect is due to a decrease in the minute volume of blood flow and renin synthesis,inhibition of the activity of the renin-angiotensin-aldosterone system (is more important in patients with initial renin hypersecretion) and the central nervous system, restoration of the sensitivity of the baroreceptors of the aortic arch (there is no increase in their activity in response to a decrease in arterial pressure (BP) and, as a result, a decrease in peripheral sympathetic influences. Reduces increased blood pressure at rest, with physical exertion and stress. The antihypertensive effect lasts more than 24 hours.
The antianginal effect is determined by a decrease in myocardial oxygen demand as a result of a decrease in heart rate (lengthening diastole and an improvement in myocardial perfusion) and contractility, as well as a decrease in myocardial sensitivity to the effects of sympathetic innervation. Reduces the number and severity of angina attacks and increases exercise tolerance. By increasing the end-diastolic pressure in the left ventricle and increasing the stretching of the muscle fibers of the ventricles can increase the need for oxygen, especially in patients with chronic heart failure (CHF).
The antiarrhythmic effect is due to the elimination of arrhythmogenic factors (tachycardia, increased activity of the sympathetic nervous system, increased cAMP, arterial hypertension), a decrease in the rate of spontaneous excitation of sinus and ectopic pacemakers and a slowdown of atrioventricular (AV) conduction (mainly in antegrade and to a lesser extent in retrograde through the AV node) and along additional paths.
With supraventricular tachycardia, atrial fibrillation, sinus tachycardia with functional heart disease and thyrotoxicosis, the heart rate slows down or may even lead to the restoration of sinus rhythm.

In contrast to non-selective beta-adrenergic blockers, when administered in moderate therapeutic doses, it has a less pronounced effect on organs containing beta2-adrenoreceptors (pancreas, skeletal muscles, smooth muscles of the peripheral arteries, bronchi and uterus) and on carbohydrate metabolism; the severity of atherogenic action does not differ from that of propranolol. With many years of admission reduces the concentration of cholesterol in the blood. When used in large doses (more than 100 mg / day) has a blocking effect on both subtypes of beta-adrenoreceptors.

Absorption when taken full (95%). Fat solubility is moderate. Subjected to intensive presystemic metabolism, bioavailability - 50% at the first admission and increases to 70% with repeated use. Communication with plasma proteins - 10%. The time to reach maximum plasma concentration of 6-12 hours after taking the drug. During the course of treatment, bioavailability increases. Eating increases bioavailability by 20-40%.
It is rapidly distributed in the tissues, penetrates the blood-brain barrier, and the placental barrier. Penetrates into breast milk.
Metabolized in the liver, 2 metabolites have beta-adrenoceptor blocking activity.CYP2D6 isoenzyme is involved in the metabolism of the drug. The half-life is from 3.5 to 7 hours when taken orally. Not removed during hemodialysis.
Significant accumulation of metabolites is observed in patients with creatinine clearance of 5 ml / min, while the beta-adrenoceptor blocking activity of the drug does not increase.
Bioavailability increases with cirrhosis of the liver, while reducing its overall clearance.

Arterial hypertension.
Chronic heart failure II-IV functional class according to the NYHA classification in the compensation stage (as part of complex therapy).
Coronary heart disease: prevention of attacks of stable angina, reducing mortality and the frequency of recurrent myocardial infarction after the acute phase of myocardial infarction.
Cardiac arrhythmias, including supraventricular tachycardia, a decrease in the rate of ventricular contraction during atrial fibrillation and ventricular extrasystoles.
Functional disorders of cardiac activity, accompanied by tachycardia.
Prevention of migraine attacks.

During pregnancy, the drug Metoprolol Retard-Akrikhin should be used only under strict indications, when the expected benefit to the mother outweighs the potential risk to the fetus / child (due to the possible development of bradycardia in the newborn, lowering blood pressure, hypoglycemia and respiratory paralysis). At the same time carry out careful monitoring, especially for the development of the fetus.Treatment is stopped 48-72 hours before the onset of labor. If this is not possible, the newborn should be under especially careful observation for 48-72 hours after birth.
The use of the drug Metoprolol Retard-Akrikhin is contraindicated during lactation, in case of need the use of the drug during lactation, breastfeeding should be stopped.

In chronic heart failure II functional class according to the NYHA classification (without exacerbations of the last 6 weeks and without a change in the complex therapy during the last 2 weeks), the recommended initial dose is 25 mg once a day. After two weeks, the daily dose can be increased to 50 mg, then after two weeks to 100 mg, in another two weeks to 200 mg.
In chronic heart failure III-IV functional class according to the NYHA classification, the recommended initial dose for the first 2 weeks is 12.5 mg of the drug once a day.It is possible to use metoprolol in another dosage form, for example, 25 mg pills with a risk. During the period of increasing the dose, the patient should be supervised, since in some patients the symptoms of heart failure may worsen.

Secondary prevention of myocardial infarction and cardiac arrhythmias - the initial dose of 100 mg 1 time per day.
With functional disorders of cardiac activity, accompanied by tachycardia - 50 mg per day, if necessary, the dose can be increased to 200 mg per day.

: 100-200 mg once a day.
Elderly patients with renal failure or patients on hemodialysis, dose adjustment is not required.
Impaired liver function affects the elimination of metoprolol, therefore, dose adjustment may be required depending on the clinical condition.

From the senses: rarely - visual impairment, dryness and / or irritation of the eyes, conjunctivitis; very rarely - ringing in the ears, a violation of taste.

Treatment: If the drug is taken recently - gastric lavage and taking adsorbents; in violation of atrioventricular conductivity and / or bradycardia - in / in the introduction of 1-2 mg of atropine, epinephrine (adrenaline) or staging a temporary pacemaker; with a decrease in blood pressure - the patient should be in the Trendelenburg position. If there are no signs of pulmonary edema - in / in plasma-substituting solutions, with the ineffectiveness - the introduction of epinephrine, dopamine, dobutamine; in acute heart failure - cardiac glycosides, diuretics; with convulsions - in / in diazepam; with bronchospasm - inhalation or parenteral beta2-adrenomimetiki.

Catecholamine depleting agents (for example, reserpine, MAO inhibitors) when used concomitantly with metoprolol may enhance the hypotensive effect or cause pronounced bradycardia. A break in treatment between taking MAO inhibitors and metoprolol should be at least 14 days.
Metoprolol is a substrate of CYP2D6 isoenzyme. Drugs that inhibit or induce the activity of the CYP2D6 isoenzyme can affect the plasma concentration of metoprolol.
Inhibitors of the isoenzyme CYP2D6: some antidepressants and antipsychotics, quinidine, Terbinafine, celecoxib, propafenone, difehydramine, hydroxychlorin, cimetidine - increase the concentration of metoprolol in the blood plasma.
Inductors of CYP2D6 isoenzyme: barbituric acid derivatives, rifampicin - reduce the concentration of metoprolol in the blood plasma.
Simultaneous use with cardiac glycosides, clonidine, blockers of “slow” calcium channels (verapamil, diltiazem), Amiodarone, class I antiarrhythmic drugs, general anesthesia drugs, methyldopa, guanfacine can lead to a decrease in blood pressure and marked bradycardia.
Means for inhalation anesthesia (derivatives of hydrocarbons) increase the risk of inhibition of myocardial function and the development of arterial hypotension.

Simultaneous i / v verapamil may cause cardiac arrest.
Non-steroidal anti-inflammatory drugs (NSAIDs) and beta-adrenomimetics weaken the antihypertensive effect of beta-blockers.

Ergot alkaloids increase the risk of peripheral circulatory disorders.
When taken together with oral hypoglycemic drugs may reduce their effect; with insulin - increasing the risk of hypoglycemia, lengthening and strengthening its severity, masking some of the symptoms of hypoglycemia (tachycardia, sweating, high blood pressure).

Strengthens and prolongs the action of non-depolarizing muscle relaxants; lengthens the anticoagulant effect of coumarins.
At the same time taking epinephrine (adrenaline) with beta-blockers may increase blood pressure and bradycardia.
Phenylpropanolamine (norephedrine) may increase diastolic blood pressure.
Allergens used for immunotherapy, or allergen extracts for skin tests when combined with metoprolol, increase the risk of systemic allergic reactions or anaphylaxis; Iodine radiopaque agents for iv administration increase the risk of Anaphylactic reactions.
When combined with ethanol increases the risk of a pronounced decrease in blood pressure.

Monitoring patients taking beta-blockers, includes regular monitoring of heart rate and blood pressure. The patient should be trained in the method of counting heart rate and instructed on the need for medical consultation with a heart rate less than 50 beats / min.
Perhaps increased severity of allergic reactions (on the background of burdened allergological history) and the lack of effect of the introduction of the usual doses of epinephrine (adrenaline).
In elderly patients, it is recommended to monitor kidney function (once every 4-5 months). May exacerbate symptoms of peripheral arterial circulation.
In case of angina pectoris, the selected dose of the drug should provide the heart rate at rest within 55-60 beats / min, with a load - no more than 110 beats / min.

In smokers, the effectiveness of beta-blockers is lower.
Metoprolol retard-Akrikhin may mask some clinical manifestations of thyrotoxicosis (for example, tachycardia). Abrupt withdrawal of the drug in patients with thyrotoxicosis is contraindicated, as it can strengthen the symptoms.
In diabetes, it can mask the tachycardia caused by hypoglycemia.
If necessary, assignment to patients with bronchial asthma as a concomitant therapy using beta2-adrenomimetics; with pheochromocytoma - alpha-blockers.
If surgery is necessary, an anesthesiologist should be warned about taking the drug Metoprolol Retard-Akrikhin (you need a choice of means for general anesthesia with minimal negative inotropic effect);

Reciprocal activation of the vagus nerve can be eliminated by / in the introduction of atropine (1-2 mg).
In case of increasing bradycardia (less than 50 beats / min), hypotension (systolic blood pressure below 100 mmHg), AV blockade, bronchospasm, ventricular arrhythmias, severe hepatic and renal dysfunction, reduce the dose or stop treatment.
It is recommended to discontinue therapy when skin rashes appear and the development of depression caused by taking beta-blockers.
Metoprolol may increase symptoms of impaired peripheral circulation.

With a sharp cessation of treatment, a “withdrawal” syndrome may occur (increased angina attacks, increased blood pressure). Particular attention in case of drug withdrawal should be given to patients with angina, CHF, after myocardial infarction. Withdrawal of the drug Metoprolol Retard-Akrikhin is carried out gradually, reducing the dose over 10 days.
Patients using contact lenses should take into account that during treatment with beta-blockers it is possible to reduce the production of tear fluid.

In dry, the dark place at a temperature of no higher than 25 ° C.
Keep out of the reach of children.