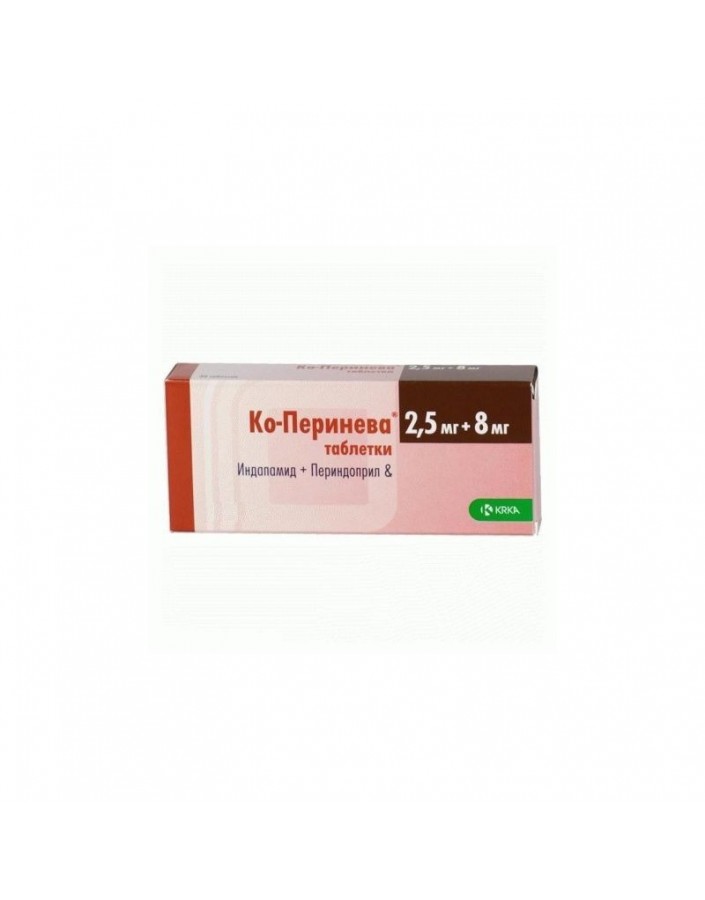 Ko-Perineva® It has a pronounced dose-dependent antihypertensive effect that does not depend on the age and position of the patient’s body and is not accompanied by reflex tachycardia. It does not affect lipid metabolism (total cholesterol, LDL, VLDL, HDL, triglycerides and carbohydrates), incl. in patients with diabetes. Reduces the risk of hypokalemia caused by diuretic monotherapy.

A steady decrease in blood pressure is achieved within 1 month on the background of the use of the drug Ko-Perinev® without increasing heart rate. Termination of treatment does not lead to the development of withdrawal syndrome.

Perindopril - an ACE inhibitor, the mechanism of action of which is associated with the inhibition of ACE activity, leading to a decrease in the formation of angiotensin II, eliminates the vasoconstrictor effect of angiotensin II, reduces aldosterone secretion. The use of perindopril does not lead to sodium retention and fluid, does not cause reflex tachycardia with prolonged treatment.The antihypertensive effect of perindopril develops in patients with low or normal plasma renin activity.

Perindopril acts through its main active metabolite, perindoprilat. His other metabolites are inactive.

In patients with heart failure, perindopril helps reduce the filling pressure of the left and right ventricles; increase in cardiac output and cardiac index; increased regional blood flow in the muscles.

Perindopril is effective for hypertension of any severity: mild, moderate, and severe.

The maximum antihypertensive effect develops after 4-6 hours after a single ingestion and persists for a day.

Termination of therapy does not lead to the development of "withdrawal" syndrome.

It has vasodilating properties and restores the elasticity of large arteries. Adding a thiazide-like diuretic enhances the antihypertensive (additive) effect of perindopril.

Indapamide refers to a sulfonamide derivative, is a diuretic. Inhibits sodium reabsorption in the cortical segment of the renal tubules, increasing the excretion of sodium and chlorine by the kidneys, thus leading to increased diuresis. To a lesser extent increases the excretion of potassium and Magnesium.Possessing the ability to selectively block slow Calcium channels, indapamide increases the elasticity of the artery walls and lowers the CRIA. It has a hypotensive effect in doses that do not have a pronounced diuretic effect. Increasing the dose of indapamide does not entail an increase in the antihypertensive effect, but increases the risk of developing adverse events.

Combined use of perindopril and indapamide does not change their pharmacokinetic parameters, compared with the separate intake of these drugs.

Eating reduces the conversion of perindopril to perindopril and the bioavailability of perindopril, so it should be taken 1 time per day in the morning before breakfast. When taking perindopril 1 time / day Css achieved within 4 days.

Plasma protein binding of perindoprilat is dose-dependent and is 20%. Perindoprilat easily passes through histohematogenous barriers, excluding the BBB. In small quantities penetrates the placental barrier and is excreted in breast milk. Does not accumulate.

In elderly patients, in patients with renal and heart failure, the elimination of perindoprilat is delayed.

Perindopril kinetics changed in patients with cirrhosis of the liver: the hepatic clearance is reduced by half. However, the amount of perindoprilat formed does not decrease, which does not require dose adjustment.

After ingestion quickly and almost completely absorbed from the gastrointestinal tract. Food intake slows down the absorption somewhat, but does not significantly affect the amount of indapamide absorbed. After ingestion in a single dose of Cmax in blood plasma is achieved after 1 h.

Plasma protein binding is 79%. Does not accumulate.

Metabolized in the liver.

In patients with renal failure, the pharmacokinetic parameters of indapamide do not change significantly.

Assign inside 1 time / day, preferably in the morning before breakfast, drinking plenty of fluids.

Doses are given for the ratio of perindopril / indapamide.

Patients with moderate liver dysfunction dose adjustment is not required.

From the reproductive system: infrequently - impotence.

From the laboratory indicators: hypokalemia; hyponatremia with hypovolemia, leading to a decrease in bcc and orthostatic hypotension; increasing the concentration of uric acid and glucose in the serum; a slight increase in plasma creatinine and urea concentrations, reversible after cessation of therapy, which often develops on the background of renal artery stenosis or arterial stenosis of a single kidney, hypertension during diuretic therapy, and renal failure; a transient increase in sodium in the blood plasma; hypochloraemia; proteinuria; rarely - hypercalcemia.

- angioedema in history (hereditary, idiopathic or angioedema due to the use of ACE inhibitors);

- severe liver failure (including with encephalopathy);

There are reports of cases of increased photosensitivity in patients receiving thiazide and thiazide-like diuretics. With the development of the photosensitivity reaction while taking the drug Ko-Perinev® treatment must be stopped. If necessary, resume the use of the drug Ko-Perinev®, open skin should be protected from direct exposure to sunlight and artificial UV rays.

Before starting treatment with Ko-Perinev® it is necessary to determine the content of sodium in the blood plasma and, while taking the drug, conduct regular monitoring of electrolytes in the blood plasma. All diuretics can cause hyponatremia, leading to serious complications.

Therapy with thiazide and thiazide-like diuretics is associated with the risk of hypokalemia (less than 3.4 mmol / l) in elderly patients, exhausted patients, patients with cirrhosis of the liver, patients with peripheral edema, ascites, ischemic heart disease, and chronic heart failure.Hypokalemia in these patients increases the toxic effect of cardiac glycosides and increases the risk of arrhythmia. High-risk patients include patients with an extended QT interval on an ECG. Hypokalemia, like bradycardia, contributes to the development of severe cardiac arrhythmias, especially ventricular pirouette arrhythmias, which can be fatal. In all the cases described, regular monitoring of potassium in the blood plasma is necessary. The first determination of the content of potassium in the blood plasma should be carried out during the first week from the start of therapy with Ko-Perinev®.

Thiazide and thiazide-like diuretics reduce the excretion of calcium by the kidneys, leading to a slight and temporary increase in plasma calcium levels. Severe hypercalcemia may be due to latent hyperparathyroidism. Before studying the function of the parathyroid glands, you should stop taking the drug Ko-Perinev®.

Glucose concentration should be monitored in patients with diabetes.

In patients with an increased concentration of uric acid in the blood plasma during therapy with Ko-Perinev® may increase the frequency of exacerbation of gout.

Hypovolemia as a result of lowering the BCC or hyponatremia caused by taking diuretics at the beginning of treatment with Co-Perineva® can lead to a decrease in glomerular filtration rate and is accompanied by an increase in plasma creatinine and urea.

Indapamide can give a false positive reaction during doping control.

Co-Perineva drug® contraindicated children and adolescents under 18 due to lack of data on efficacy and safety of use.

Care must be taken when driving vehicles and other technical devices that require increased attention and speed of psychomotor reactions.

Symptoms: pronounced decrease in blood pressure, nausea, vomiting, muscle cramps, dizziness, drowsiness, confusion, oliguria up to anuria (due to a decrease in the BCC); possible violations of water and electrolyte balance (low sodium and potassium in the blood plasma).

Treatment: gastric lavage and / or the appointment of Activated carbon, the restoration of water and electrolyte balance in the hospital. With a pronounced decrease in blood pressure, it is necessary to transfer the patient to a supine position with their legs elevated; then it is necessary to carry out measures aimed at increasing the bcc (introduction of a 0.9% solution of sodium chloride in / in). Perindoprilat, the active metabolite of perindopril, can be eliminated from the body through dialysis.

Simultaneous use is not recommended.

With the simultaneous use of lithium preparations and ACE inhibitors, there have been cases of a reversible increase in the concentration of lithium in the blood serum.

Simultaneous administration of thiazide diuretics may contribute to an increase in the concentration of lithium and the risk of its toxic action in the presence of an ACE inhibitor.

Simultaneous use of potassium-sparing diuretics (such as spironolactone, eplerenone, triamterene, amiloride), potassium preparations or potassium-containing salt substitutes, as well as the use of other drugs that increase the plasma potassium level (eg, heparin) increases the risk of hyperkalemia.