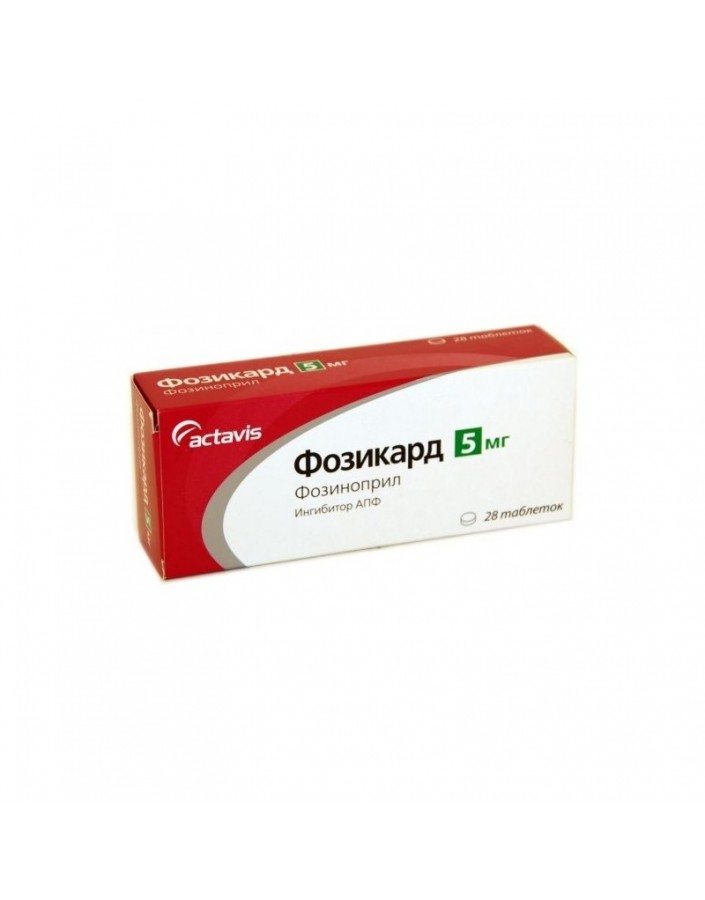 Fosicard - an ACE inhibitor. Fosinopril is an ester from which an active metabolite, fosinoprilat, is formed in the body.
Fozinoprilat prevents the conversion of angiotensin I into the vasoconstrictor substance angiotensin II, which leads to vasodilation, a decrease in OPSS and a decrease in aldosterone secretion. By reducing the secretion of aldosterone, there is a slight increase in the content of potassium ions in the serum with simultaneous loss of sodium ions and fluid from the body. The drug has antihypertensive, vasodilating, diuretic and potassium-sparing effect. The antihypertensive effect is also due to the suppression of the metabolism of bradykinin, which has a pronounced vasodilating effect. Reduction of blood pressure is not accompanied by a change in the bcc, cerebral and renal blood flow, blood supply to the internal organs, skeletal muscles, skin, and myocardial reflex activity. The antihypertensive effect of the drug is maintained with long-term treatment, tolerance to the drug does not develop. After ingestion, the antihypertensive effect develops within 1 hour, reaches a maximum after 2-6 hours and lasts for 24 hours.

- Hereditary or idiopathic angioedema (including history) after taking other ACE inhibitors.
- Pregnancy.
- Lactation period (breastfeeding).
- Children's and teenage age up to 18 years.
- Hypersensitivity to fosinopril and other components of the drug.
With caution should use the drug in the following cases:
- Renal failure.
- Hyponatremia (risk of dehydration, arterial hypotension, chronic renal failure).
- Bilateral renal artery stenosis or arterial stenosis of a single kidney.
- Aortic stenosis.
- Condition after kidney transplantation.
- Desensitization.
- Systemic diseases of the connective tissue, incl. SLE, scleroderma (increased risk of neutropenia or agranulocytosis).
- Hemodialysis.
- Cerebrovascular diseases (including cerebrovascular insufficiency).
- CHD.
- Chronic heart failure III and IV functional class according to the classification of NYHA.
- Diabetes.
- Inhibition of bone marrow hematopoiesis.
- Hyperkalemia.
- Elderly patients.
- Subject to a salt-restricted diet.
- In conditions accompanied by a decrease in BCC (including diarrhea, vomiting).

With hypertension: if possible, treatment of hypertension should be discontinued, if possible, previously used antihypertensive treatment several days before starting to take Fozikarda. The initial dose is 10 mg 1 time / day. In the future, the dose should be selected depending on the dynamics of blood pressure reduction. The average maintenance dose is 10-40 mg 1 time / day. In the absence of a positive effect of monotherapy Fozikardom possible additional appointment of diuretics. If treatment with Fozikardom begin on the background of ongoing diuretic therapy, then its initial dose should be no more than 10 mg with careful medical monitoring.
In the treatment of chronic heart failure The initial dose of Fozikarda is 10 mg 1 time / day. Next, the dose of the drug is selected in accordance with the dynamics of therapeutic efficacy, increasing by 10 mg with a weekly interval. The maximum dose is 40 mg / day. Perhaps the additional appointment of diuretics.

Patients with severe arterial hypertension or concomitant decompensated chronic heart failure should begin treatment with in the hospital. Before and during drug treatment, control of blood pressure, kidney function, potassium concentration, hemoglobin, creatinine, urea, electrolyte concentrations, and liver enzyme activity in the blood is necessary.While taking Fozikarda, the number of leukocytes in the peripheral blood should be periodically monitored, especially in patients with an increased risk of neutropenia (in case of impaired renal function and systemic diseases of the connective tissue). Due to the increased risk of arterial hypotension, care must be taken when prescribing the drug to patients on a low-salt or salt-free diet.

Antihypertensive agents, diuretics, opioid analgesics, agents for general anesthesia, while used with Fozikardom strengthen its hypotensive effect. NSAIDs and estrogen drugs, while the application reduces the severity of the antihypertensive effect of Fozikarda. With simultaneous use of Fozikarda with potassium preparations, potassium-sparing diuretics increases the risk of developing hyperkalemia. Fosicard enhances the hypoglycemic effect of sulfonylurea derivatives, insulin. With simultaneous use of Fozikarda with Allopurinol, cytotoxic drugs, immunosuppressants, procainamide increases the risk of leukopenia. At the same time taking Fozikarda with lithium salts may increase the concentration of lithium in the blood.

Symptoms: pronounced decrease in blood pressure, bradycardia, shock, violation of water and electrolyte balance, acute renal failure, stupor.
Treatment: stop taking the drug, put the patient in the supine position with his legs raised. In mild cases of overdose - gastric lavage, the introduction of sorbents and sodium sulfate within 30 minutes after ingestion. With a decrease in blood pressure - in / in the introduction of catecholamines, angiotensin II; in bradycardia - the use of pacemaker. Hemodialysis is ineffective.