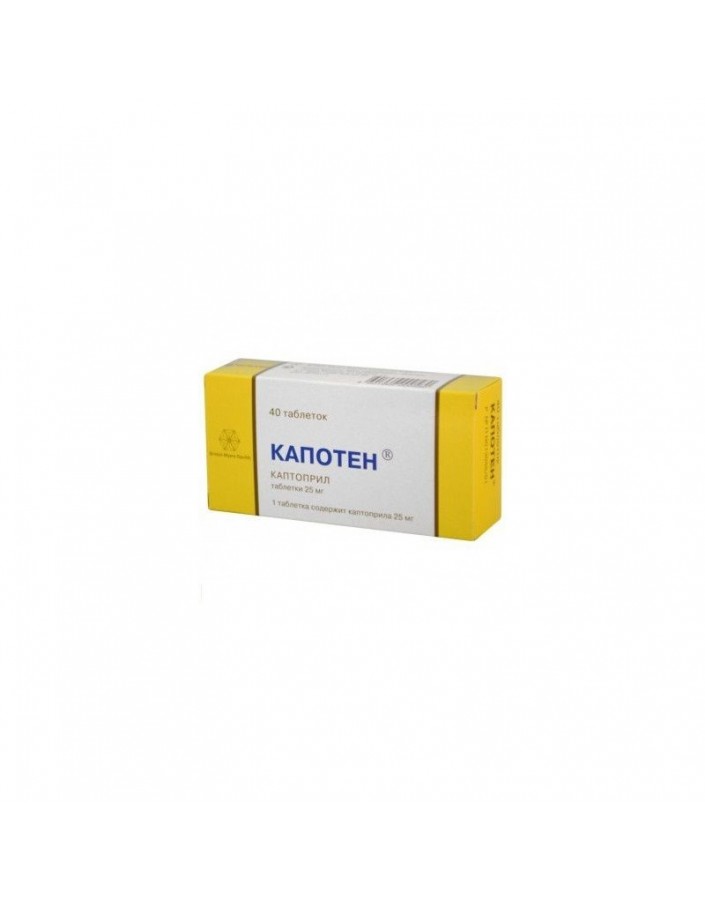 - dysfunction of the left ventricle after myocardial infarction in a clinically stable state;

- diabetic nephropathy on the background of type 1 diabetes mellitus (with albuminuria> 30 mg / day).

Capoten® administered orally for 1 hour before meals. The dosage regimen is set individually.

At chronic heart failure Capoten® prescribed in cases where the use of diuretics does not provide an adequate effect. The initial dose is 6.25 mg 3 times / day. If necessary, increase the dose every 2 weeks. Maintenance dose - 25 mg 2-3 times / day. The maximum daily dose is 150 mg.

At diabetic nephropathy daily dose ranges from 75 mg to 100 mg, divided into 2-3 doses. At insulin-dependent diabetes mellitus with microalbuminuria (albumin clearance 30-300 mg / day) dose of the drug is 50 mg 2 times / day. With a total protein clearance of more than 500 mg / day, the drug is effective at a dose of 25 mg 3 times / day.

Elderly patients the dose is selected individually. Treatment is recommended to start with the smallest therapeutic dose of 6.25 mg 2 times / day and, if possible, to maintain it at this level.

If necessary, additional designate "loop" diuretics, and not the diuretics of the thiazide series.

Urogenital: proteinuria, an increase in the content of urea nitrogen and creatinine in the blood plasma, acidosis.

- angioedema (hereditary or associated with the use of ACE inhibitors in history);

- Aortic stenosis and similar obstructive changes that impede the flow of blood from the left ventricle;

- hypersensitivity to the drug and other ACE inhibitors.

The drug is contraindicated for use during pregnancy and lactation.

Before beginning, and regularly in the process of treatment with Capoten, the kidney function should be monitored. In patients with chronic heart failure, Capoten® should be used under close medical supervision.

On the background of long-term use of Capoten in approximately 20% of patients, an increase in the content of urea and creatinine in the blood serum is observed by more than 20% compared with the norm or baseline value. Less than 5% of patients, especially in severe nephropathies, require discontinuation of treatment due to an increase in creatinine concentration.

In patients with arterial hypertension when using Capoten, severehypotension is observed only in rare cases; the likelihood of developing this condition increases with increased loss of fluid and salt (for example, after intensive diuretic treatment), in patients with heart failure or being on dialysis.

The possibility of a sharp decrease in blood pressure can be minimized with a preliminary cancellation (4-7 days) of a diuretic or an increase in sodium chloride (about a week before the start of treatment), or by administering Capoten at the beginning of treatment in small doses (6.25-12.5 mg / day).

When conducting hemodialysis in patients receiving capoten®, the use of high permeability dialysis membranes (for example, AN69) should be avoided, since in such cases the risk of anaphylactoid reactions increases.

In the case of the development of angioedema, the drug is canceled and thorough medical supervision is carried out. If the edema is localized on the face, special treatment is usually not required (antihistamines can be used to reduce the severity of symptoms); If the edema spreads to the tongue, pharynx or larynx and there is a threat of airway obstruction, 0.5 ml of 0.1% solution of epinephrine (adrenaline) should be injected immediately.

When taking Capoten, a false-positive reaction may be observed in the analysis of urine on acetone.

Caution should be prescribed Kapoten ® patients who are on a low-salt or salt-free diet, because in this case, the risk of arterial hypotension increases.

In case of symptomatic arterial hypotension after taking Capoten, the patient should assume a horizontal position with the legs elevated.

During the period of treatment, it is necessary to refrain from driving vehicles and practicing potentially hazardous activities that require increased concentration and psychomotor speed, sincedizziness may occur, especially after taking the initial dose.

Treatment: the introduction of an isotonic solution of sodium chloride or other plasma-substituting drugs, hemodialysis.

Diuretics, vasodilators (for example, minoxidil) potentiate the antihypertensive effect of the drug Capoten®.

Indomethacin and other NSAIDs may reduce the antihypertensive effect of the drug Capoten®.

Simultaneous use of Capoten with potassium-sparing diuretics (for example, triamterene, amiloride and spironolactone), potassium preparations, potassium supplements, salt substitutes (contain significant amounts of potassium) may increase the risk of hyperkalemia.

The simultaneous use of salts of lithium and Capoten can lead to an increase in the concentration of lithium in the blood serum.

Against the background of simultaneous use of Capoten with Allopurinol and procainamide, neutropenia and / or Stevens-Johnson syndrome may be observed.

With simultaneous use of immunosuppressants (eg, azathioprine and cyclophosphamide) with Capoten, the risk of hematological disorders increases.

List B. The drug should be stored in a dry place inaccessible to children at a temperature not higher than 25 ° C.