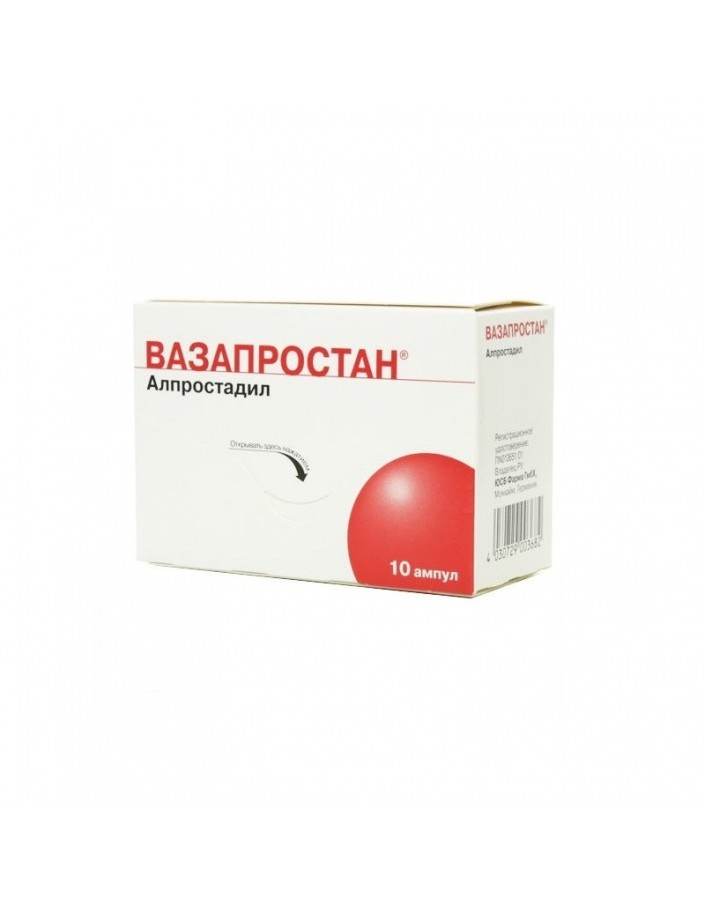 VASAPROSTAN IS A LYOPHILISATE FOR THE SOLUTION OF AMPOULE 20MCG

- chronic obliterating diseases of arteries of the III and IV stages (according to the Fontaine classification).

It is necessary to prepare the solution immediately before performing the infusion. The lyophilisate is dissolved immediately after the addition of saline. Initially, the solution may turn milky. This effect is created by air bubbles and does not matter. After a short time, the solution becomes clear.

Do not use the solution prepared more than 12 hours ago.

Musculoskeletal system: hyperostosis of long tubular bones (with therapy for more than 4 weeks).

Local reactions: erythema, edema, pain, impaired sensitivity, phlebitis (proximal to the place of / in the introduction).

Other: increased sweating, hyperthermia, swelling of the limb, into which the vein is infused.

The side effects associated with the use of the drug or with the catheterization procedure itself are reversible after dose reduction or cessation of the infusion.

- a history of liver disease;

- diseases accompanied by an increased risk of bleeding (gastric ulcer and duodenal ulcer, severe damage to the brain vessels, proliferative retinopathy with a tendency to bleeding, extensive injury);

- hypersensitivity to alprostadil and other components of the drug.

WITH caution Vasaprostan should be prescribed for arterial hypotension, cardiovascular insufficiency (it is obligatory to control the load of the carrier volume), patients on hemodialysis (treatment should be carried out in the post-dialysis period), patients with type 1 diabetes, especially for extensive vascular lesions.

Vasaprostan can be used only by doctors who have experience in angiology, are familiar with modern methods of continuous monitoring of the cardiovascular system and have the appropriate equipment for this.

During treatment, Vasaprostan should monitor blood pressure, heart rate, blood biochemical parameters, blood clotting parameters (for violations of the blood coagulation system or for simultaneous therapy with drugs that affect the coagulation system).

List B.The drug should be stored out of the reach of children at a temperature not higher than 25 ° C.